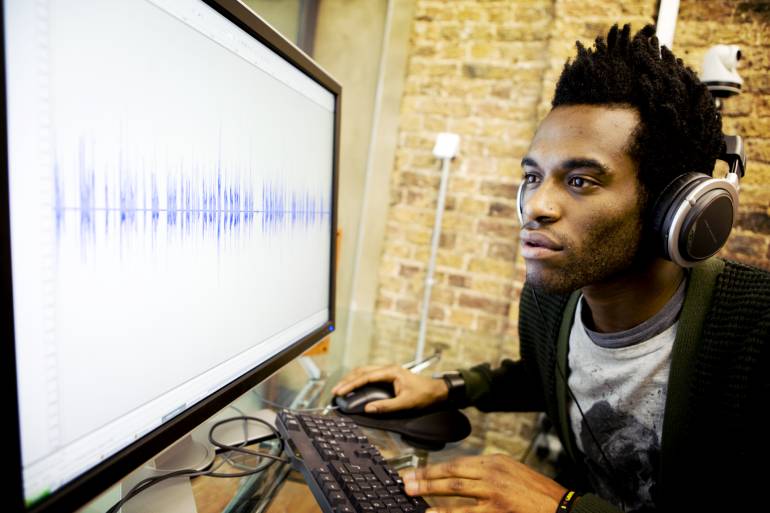 Now that you’ve compiled your latest round of originals, how are you going to present the new work to an increasingly judgmental listening public? As we’ve frequently discussed within these pages, the art of creative engineering is nearly as important as the song craft itself. Here are a handful of proven methods for creating a sonic landscape to match the feel of your new material.

Naturally the easiest way to gussy up any recording is to judiciously drop in a few basic effects here and there. A splash of reverb adds instant dimension to an otherwise lifeless lead vocal or bare-bones instrumental overlay; some slapback delay or repeat echo can produce the same result, while providing a bit of rhythmic feel as well. To avoid a hyper-wet sound when using reverb, boost the level of the pre-delay on your effect settings, which will increase the space between the dry and “colored” signals (you can also pan the pre-delayed signal so that the sound of the reverb “jumps” across the stereo spectrum).

A compressor-limiter can also be a potent weapon. At a moderate setting the compressor levels, rather than effects, the signal (hence the “limiter” designation); raising the compressor’s “attack” while decreasing the “release” and “threshold” settings produces a more aggressive sound, suitable for lead vocal, acoustic guitar, drums, and other parts. Because the compressor responds differently depending on the volume of the source, experimentation is key; settings that you’ve used on a snare-drum mic, for instance, may be totally inappropriate when it comes time to record a vocal part.

When processing tracks, avoid overdoing it. Excessive use of delay or reverb can easily cause a recording to lose its focus; though a compressed mix might sound awesome in your basement, if radio play is your goal, bear in mind that the added broadcast compression will likely squash your pre-squished track into oblivion.

Equalization can be used as an effect as well. Radically raising the mid-range while simultaneously rolling off the bass and treble can result in a nice strident piano sound (especially when combined with a bit of compression), and may also be used for lead and/or background vocals as well.

Of course there are more organic ways of achieving a sound to match the song—including how you use your microphone set-up. When recording an electric guitar or other amplified instrument, for example, standard operating procedure calls for a single microphone placed a few inches from the amp’s grille cloth. If your goal is to create a more ambient, live vibe, however, try situating a second microphone 5-10 feet away from the source in order to capture the natural room sound (as well as some live leakage from nearby instruments). When mixing, place the two tracks at opposing ends of the stereo spectrum.

Mic placement—and mic selection—is also a key element when cutting vocals. If it’s a more “intimate” sound you’re after, condenser mics can’t be beat—the larger diaphragms respond particularly well to singers situated just a few inches from the windscreen, resulting in a richer tone (known as the “proximity effect”). Not that the close-mic approach works on everybody—voluminous vocalists, or those who have a hard time standing still, can be particularly problematic. Placing a limiter in the signal path can help reduce sudden volume spikes when attempting to close-mike a loud, antsy singer; if recording with live instrumentation, be sure that the mic is in cardioid position, with the “inactive” side facing the players in the room.

If on the other hand the music suggests something a little less direct—and particularly if you have a good-sounding room—a more ambient vocal-miking approach might be preferable. Switch the mic pattern from cardioid to omni, then suspend the mic on a boom stand at least a foot in front from the singer, pointed directly down toward the vocalist’s forehead.

Anyone who’s ever listened to session outtakes from the early multitrack days has likely detected the presence of echo or delay during the between-take studio chatter. Back when tracks were fewer, engineers frequently applied effects during the actual recording, rather than adding it afterward, in part to save time (and track space). But it wasn’t just about efficiency—many studio veterans firmly believed that “printing” the effect live often had a dramatic impact on the overall sound, as well as the performance itself. Legend has it that John Lennon loved having tape echo fed directly into his headphones during the Beatles’ recording sessions, which allowed him to use the delay as a rhythmic effect (as heard on tracks like “A Day in the Life” and others).

The late Chuck Britz, who served as recording engineer for the Beach Boys and many others, recalled that studio effects such as echo chamber and tape delay typically worked best when added live: “Because when you could hear it all right at the moment, you knew exactly what you had. And if you didn’t like the way it sounded, you could just change it on the spot.”

Though it might involve a bit of courage, next time around try using reverb, delay or other processing during the actual take, thereby allowing the vocalist (or other performer) to respond to the effect right then and there. If recording with the effect seems too risky, as a compromise you could simply send the effect to the singer’s headphones (using the monitor patch), rather than actually “printing” it to the recording.

Bear in mind, however, that it never hurts to take a few chances. “The whole point of recording is to trust your ears,” said engineer Britz. “If you try something different and it doesn’t work, you still haven’t lost anything. So many times people would come up to me and say, ‘You know, Chuck, you really can’t do that,’ and my response would always be, ‘Who cares? It sounds good…therefore, I’m doing it!’”