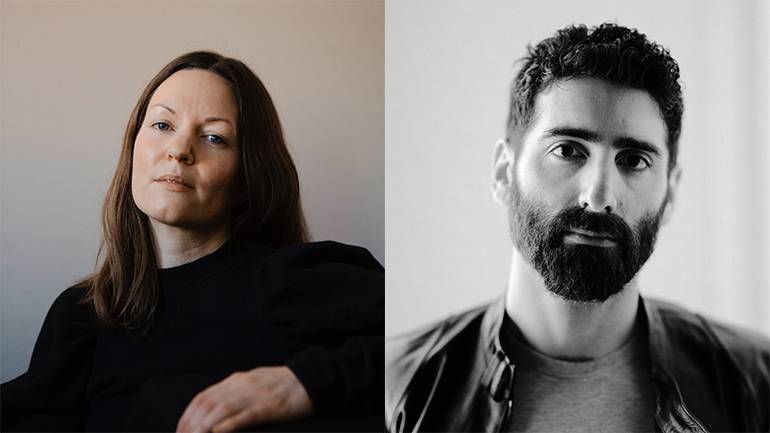 Creative collaborators Alexis Marsh and Samuel Jones have worked together for over a decade, making music that brings stories to life. The multi-instrumentalists, songwriters, composers, and producers initially found common ground in film music history class, and set out to find filmmakers interested in long, rewarding artistic partnerships built on trust, mutual understanding, and a shared vision.

One of these successful partnerships is with director and photographer Morrisa Maltz, who Marsh and Jones have worked with on multiple projects, most recently on scoring The Unknown Country, which follows a young woman on an evocative journey throughout the Midwest. The film premiered at SXSW on March 13, featuring Marsh and Jones’ music performed by a string ensemble.

Since the start of their career, Marsh and Jones have found seemingly endless outlets for their work, contributing to films (We’ll Never Have Paris, Lila & Eve), television shows (Animal Kingdom, Sesame Street) and documentaries (Ingrid, 20 Years of Madness), and they have also created music for advertising campaigns, online series, and art installations. Tirelessly honing their craft, they still found time and energy to form a band, DYAN, whose music has been featured on television shows including Better Things, South Side and Jessica Jones.

BMI chatted with Marsh and Jones shortly before the SXSW debut of The Unknown Country, and the duo shared how they’ve built a collaborative relationship with Maltz and Animal Kingdom’s John Wells, and why they save recordings of everything they write.

You’ve been collaborating since graduating from USC’s prestigious Scoring for Motion Pictures and Television program (now known as the USC Thornton Screen Scoring program) in 2010. How did you initially start working together?

Jones: Pretty early on in the USC scoring program we identified one another as kindred spirits in our aesthetic musical sensibilities—we were the only two students in our film music history class whose ears perked up more at the Fellini films scored by Nino Rota, and the French New Wave scores from Georges Delerue and Michel Legrand. It also turned out that our skill sets were complementary and lent themselves well to the kinds of unique chamber-ensemble sounds we heard in our heads. So, over the course of the year at USC, working on student film after student film, we started out hiring each other for recordings, and eventually that evolved into writing and producing together.

Marsh: I play woodwinds and Sam plays guitar, so when we started scoring student films, we’d have each other listen and play on our respective cues. When we graduated, we looked for work as assistants, but there weren’t a lot of opportunities, so we decided to partner and just go after independent films and student films. We knew the music sounded better when we were both contributing to the sound—by writing or playing and co-producing. It just made sense at the time, and independent film is where we had a chance to write to picture.

One of your most recent projects, The Unknown Country, had its world premiere at SXSW on March 13. Tell us a bit about how you got involved and what it’s been like working again with director Morrisa Maltz, who you worked with on the documentary, Ingrid. What made you want to collaborate again and how do you establish and nurture a strong working relationship with directors?

Marsh: We met Morrisa through USC and AFI filmmakers. She’s always working on interesting projects and, thankfully, likes what we do. We initially scored a short film of hers in 2013, then worked with her on a music video for a song from our first album. Ingrid was scored through editing some tracks from our library—we keep every track we make for such occasions—and she put together a beautiful score when the budget and timeline was too tight for original music.

She’d been telling us about The Unknown Country for a while before she called and said she had an edit ready. It was June or July of 2020, so we were on hiatus from Animal Kingdom, waiting for sets to reopen. We ended up taking a lot longer than we usually get to write the music. There were a couple cues where we weren’t finding the right sound, but Morrisa was really patient. She had such faith that we were going to get it, so we kept trying different ideas.

Working through that stress and continuing to show up without blame and anxiety is very helpful. It takes a while to be able to let go of good ideas that just aren’t working without fear that you won’t have more. But again, we save what doesn’t get approved, write more, and maybe those cues—those many, many cues—will be perfect for another project. That allows you to show up for the director and support their vision without resentment. We’ve had enough experience seeing how often things work when we revise our work. It’s just part of the process.

Jones: We’ve been working with Morrisa since almost the beginning of our careers. We recognized from those first projects that she had the kind of artistic vision we wanted to be a part of, and saw an opportunity for, a long-term collaboration that we’ve been very fortunate to maintain for almost a decade.

We have always seen the long-term, symbiotic-seeming director/composer relationship—i.e., Sergio Leone/Ennio Morricone, Federico Fellini/Nino Rota, David Lynch/Angelo Badalamenti—as the gold standard for an artistically fulfilling career. Having a level of trust and mutual understanding with a collaborator built up over years of work and friendship allows for a creative latitude and boundary-pushing freedom that we all strive for. While we do take care and work hard to try and understand the vision and communication style of any director we work with, I think that kind of relationship only happens out of an organic chemistry, aesthetically and personally, where both the working process and the end product feel like this perfect, greater-than-sum-of-parts alchemy.

In addition to your composition work for feature films, television series, documentaries, advertising campaigns, and even art installations, you’re in a band together, DYAN, whose work has also been featured on television shows. How does your creative process shift between different types of projects?

Marsh: DYAN grew out of rejected cues, scraps of ideas, or low-budget films that wanted songs, but didn’t have a sync budget. After five years of scoring various projects, we had enough material to work toward a release. I wrote a few new songs, but most had a cinematic quality because that’s what we’re drawn to in harmony, structure, and orchestration. Songs in movies can be thrilling, and we love how TV and film use both songs and score to support a story. We started as film composers because the music just comes to us quickly when we have images to work with. DYAN challenges us to work outside of what we’re comfortable with—other people’s stories. But each outlet pushes us to think differently as composers and producers.

Jones: DYAN is a natural outgrowth of our composing work. Making music that exists for its own sake and stands apart from a pre-conceived visual medium is, of course, a different beast, but there are still similarities that have continuity from our scoring process. The initial material of a new song, which comes in the form of Alexis’s lyrics and melodies, is almost like its own little film, and the process of creating the right harmonic backdrop and sonic atmosphere to emphasize the lyrical feeling is close to scoring on a conceptual level.

You’ve composed for multiple seasons of the TNT drama Animal Kingdom, which will air its sixth and final season this year. How does it feel to wrap this long running project, and what have you learned from working on a series for so many seasons?

Jones: Animal Kingdom was such a dream project for us, in that we found ourselves—with almost no prior episodic television experience—working with a team of exceptionally competent and experienced people who somehow had seemingly total confidence in us to do the job. The biggest learning experience of the show may have been on that managerial level: How the level-headed professionalism of the production—all the way from the top producer and the writing team, through the post crew, the editors, and the assistants—created an environment of trust that gave us confidence that we could put in the work, figure out the right thing for each situation, and meet every deadline without going too crazy about it. It’s bittersweet to let go of the past six years working with this team. We are proud of the work we’ve done and happy to have met these great collaborators but, at the same time, excited to move on to the next big thing.

Marsh: Working with [Animal Kingdom executive producer and writer] John Wells and his team showed us how we could work without tension. Film school can terrify students with stories of high-pressure environments, impossible deadlines, and brutal rejection. When we did experience each of those aspects of the film industry, they were balanced with directors and producers, cast and crew, who are really good at what they do—and want you to have your weekend, too. We loved being a part of a team that could laugh at the intensity, still be kind, and get it finished on time. Strange to think that Animal Kingdom could be a lesson in kindness and support, but it really was.

What advice would you give to composers who are just getting started in their careers?

Marsh: The opportunities can come from anywhere; save everything you write and record, even rejected cues.

Jones: Going back to the concept of establishing and nurturing strong relationships—that was a huge part of what allowed us the success we’ve had and is usually the first thing I tell aspiring composers, or anyone wanting to work in this industry. If you cast a wide enough net and commit yourself to working very long and hard on as many projects as you can with as many people as you can, you will eventually accumulate a network of people. And, if you apply yourself to maintaining that network in a systematic way and aren’t afraid to reach out to people and follow up on the relationships you find personally and professionally valuable, the outcomes are going to be at worst neutral, but more often positive.

The other major piece of advice we like to give is to be proactive about keeping busy. If gigs aren’t coming your way and nobody is paying you, as long as you can find some way to pay the rent and eat, there’s no reason not to be working. Not only does continually working on your craft make you a better composer, maintaining productivity also creates opportunities in unexpected ways. The more work you create, the more likely you are to have the right music to attract a potential gig at the right time.

Jones: Our focus since finishing the final Animal Kingdom season has been mostly working on the next batch of DYAN songs. We also try to use time between scoring projects, as per the advice given above, to keep studying music that excites us, and to keep writing and producing for the sake of writing and producing. Whether it be contemporary scores we find compelling, or classical music, opera, pop songs, etc., there’s always something to learn from and absorb techniques and theoretical knowledge that we can apply to our work.