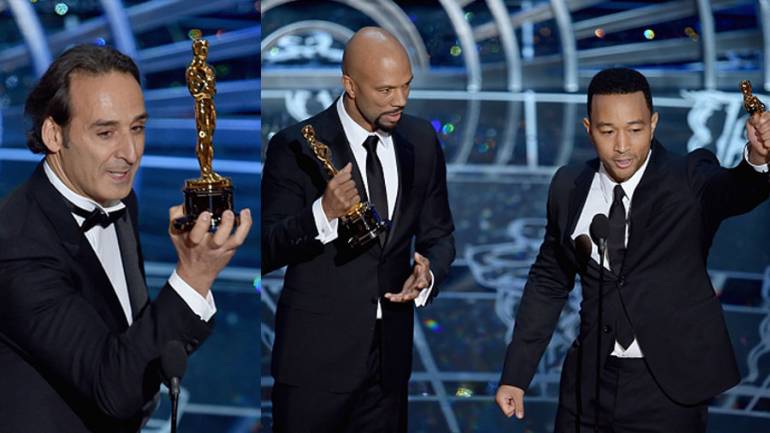 The 87th Annual Academy Awards gave Broadcast Music, Inc. songwriters and composers something to celebrate, with wins in both music categories of the evening. The winners were announced during a star-studded ceremony broadcast live February 22, 2015, from Hollywood, California, which kicked off with a lively tribute to cinema’s history, the opening song “Moving Pictures,” penned by Kristen Anderson-Lopez and Robert Lopez, the GRAMMY-winning writers behind Frozen’s breakout hit “Let It Go.”

Eight-time Oscar nominee, composer Alexandre Desplat (SACEM) took home his first Oscar trophy for Best Original Score for The Grand Budapest Hotel (nominated for Best Picture), which has also netted Desplat a BAFTA award, GRAMMY and World Soundtrack Award for Best Original Score this awards season. He was also nominated for an Oscar for the incredible score of The Imitation Game.

The Best Original Song honor went to “Glory,” penned by John Legend and Common, from the powerful film Selma (nominated for Best Picture), which also earned them a 2015 Golden Globe. The night included a moving performance of the winning song by its writers that received a standing ovation.

Congratulations on these prestigious wins!