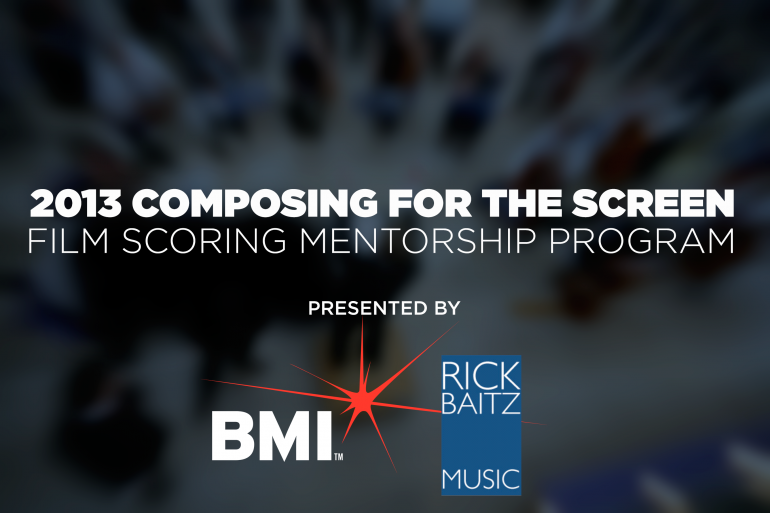 Broadcast Music, Inc. is proud to celebrate and sponsor the art of scoring via its 2013 Composing for the Screen Film Scoring Mentorship Program. Directed by BMI composer Rick Baitz, this annual New York City-based seminar provides an opportunity for nine emerging film composers to participate in a high-level workshop where film music will be examined from many perspectives: historical, psychological, dramatic, stylistic and more. Using the elegant and comfortable facilities of the BMI Media Room, participants will explore a wide range of film music excerpts, including composing, recording and sharing work in a supportive environment. For each student’s final project, he or she will compose a cue to a well-known film, which will then be recorded by top-notch New York studio musicians. Students will leave the workshop with greater confidence in their own voices as film composers, a strong cue for his or her reel, an increased understanding of the business of film music and greater sensitivity to the art of composing for the screen. During the year following the workshop, regular meetings will be held with the group, to share work and discuss students’ development as film composers.

Baitz - who received his Doctorate of Music Arts in Composition from Columbia University and is currently Faculty Chair of Vermont College of Fine Arts’ MFA in Music Composition - composes for film, television, dance, theater and the concert stage. His concert works have been performed across the United States, Europe and Latin America, with his string quartet “Chthonic Dances” premiered by the eminent ensemble ETHEL in 2011. Recent screen credits include the feature documentary Who Cares About Kelsey (premiered at the 2012 Woodstock Film Festival), HBO’s The Vagina Monologues and Life Afterlife, the award-winning PBS documentary Body & Soul: Diana & Kathy, the Sundance-honored The Education of Shelby Knox, National Geographic’s acclaimed specials The New Chimpanzees, Heart of Africa and Looters and Atom Films’ Baby Steps, starring Kathy Bates.

To apply for the 2013 Composing for the Screen Film Scoring Mentorship Program, download the application and follow the application packet guidelines. All applications must be received by Monday, August 19.

The program is free to qualified participants and open to emerging film composers who have some experience in film and want to learn more. Qualifications include experience and credits as a composer and ability to read music. Some experience composing for film is preferred. Applicants should have access to professional music production equipment, including a computer with composing software such as Logic, Digital Performer or ProTools and notation software such as Sibelius or Finale, as well as the ability to create MIDI or hybrid scores.

All inquires should be addressed to Rick Baitz at filmmusic@rickbaitz.com