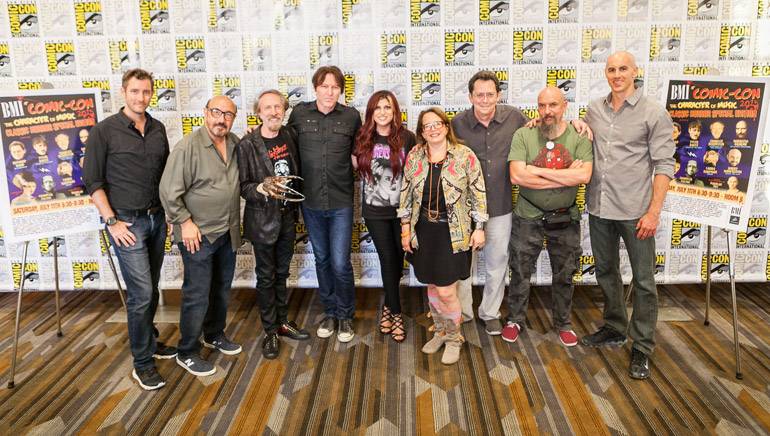 BMI and its affiliates made a compelling case for music in every medium during this year’s Comic-Con, with featured composers talking about their music to the sold-out crowd of interested fans at a number of unique panels. First up was “Behind the Music – Crime, Death and Resurrection,” sponsored by CW3 PR, which explored the sounds that drive viewers to new emotional heights of shock, terror, and fear in some of Hollywood’s biggest shows. The panelists for this blockbuster discussion included Sean Callery (24, Homeland, Bones), Charlie Clouser (Wayward Pines), Fil Eisler (Empire, Revenge), Mac Quayle (American Horror Story: Freak Show, Scream Queens), Jeff Russo (Fargo, Tut, Power) and Mike Suby (Pretty Little Liars, The Vampire Diaries), while special guest Daniel Gillies (The Vampire Diaries, The Originals) moderated the panel.

And wrapping up July 10 with another high point, BMI composers talked “High Score – Music for Videogames.” This special panel was an inaugural event for the first annual Bad Ass Music Festival, held in connection with San Diego Comic-Con and featuring leading composers in the videogames playing field with the discussion moderated by Victoria Atkin, the star of the October releasing videogame Assassin’s Creed Syndicate, in which she plays the first female assassin of the series, Evie Frye. Composers adding insights behind the music that propels the action and tension of games such as World of Warcraft, StarCraft, Medal of Honor, Call of Duty, Best Fiends and the new film Minions, included Jason Hayes, Jack Wall, Timothy Wynn, Christopher Lennertz and Heitor Pereira.

Last, but certainly not least in the eerie world of Comic-Con was BMI’s “The Character of Music: Classic Horror Special Edition,” which along with the highly unique discussion panel, featured a meet and greet with composers who signed exclusive Comic-Con posters for the fans who couldn’t wait to hear their music in their nightmares.