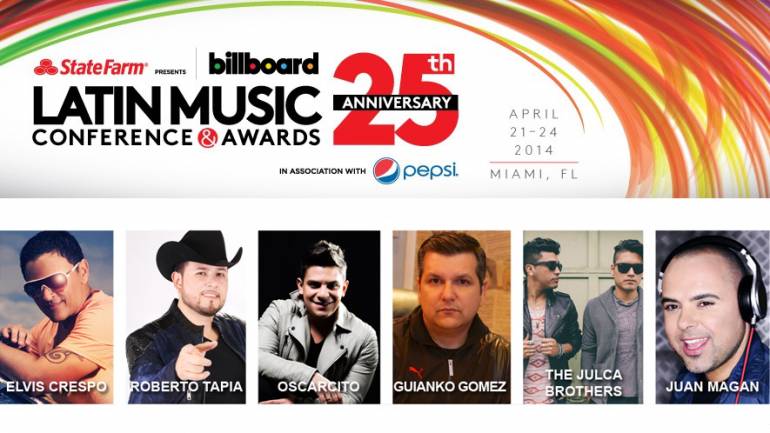 Moderated by BMI Vice President, Latin Music, Delia Orjuela, BMI’s “How I Wrote that Song®” panel, scheduled for April 23 at the JW Marriott Marquis in Miami, brings Latin music’s biggest stars to the Billboard Latin Music Conference for an exclusive behind-the-scenes discussion on crafting some of the genre’s biggest hits. Among other topics, the conversation will explore the ever-changing landscape of the music industry, establishing career longevity and determining today’s Latin charts. For more information on the conference and how to register with a BMI discount, please click here.

The only Latin artist to have music played on the moon, Elvis Crespo has gained worldwide popularity with songs such as “”Tu Sonrisa,” “Pintame” and “Suavemente,” and quickly became known as the King of Meringue and Meringue-Fusion. Raised in Puerto Rico, Crespo is an alumnus of the popular group Grupo Mania and touts the longest lasting Tropical song on the Billboard National Hot List with his seven week No. 1 “Suavemente.”

Multitalented singer/songwriter/producer Roberto Tapia has a strong following in his native Mexico as well as in the United States, with hits to his credit such as “El Pistolero,” Amores como el Nuestro” and “La Fiesta.” A recent collaboration with Enrique Iglesias and Romeo Santos entitled “Loco,” plus eight albums, including the eight week chart-topper El Muchacho, continue to pave the way for his ongoing success.

Venezuelan Oscar Hernandez, better known as Oscarcito, is a skilled singer, songwriter and producer known for such hits as “La Cachhorrita,” El Vestido Rojo,” Pa’ Que Lo Tengas Claro” and the theme for Venezuelan soap opera La Mujer Perfecta, entitled “Tue Res Perfecta.” Oscarcito’s songs can be heard on radio stations in Peru, Ecuador, Panama, Costa Rica and the Dominican Republic, and he has received multiple nominations and awards at the Orchid of Double Diamond Awards and the Pepsi Music Awards.

Cuban-born Tropical singer, songwriter and producer Guainko “Yanko” Gomez, best known for his worldwide hit “A Sangre Fria” in 1997, has earned almost 20 GRAMMY nominations for his work on Celia Cruz’s “Le Negra Tiene Tumbao,” Luis Enrique’s “Yo No Sé Mañana” and many others. Gomez, who comes from a family rich in musical accomplishments, has also worked with Marc Anthony, Thalia and Prince Royce.

The Miami-based artist/songwriter/producer duo Dav and Johnny Julca have produced or co-written songs for some of Latin’s biggest names, including Paulina Rubio, Pitbull, Jencarlos Canela, Kat Dahlia and many others. In 2012, the Brothers produced Christian Pagan’s Mas De Lo Que Soy, which yielded the Julca Brothers-penned “Desde Que Se Fue” that reached No. 1 in Puerto Rico and landed on the Top 10 Latin Pop Airplay chart in the United States.

Juan Magan
Hailing from Barcelona, Juan Magan is a talented producer, DJ, composer, lyricist and vocalist. DJing all over the world and charting No. 1 hits in countries like Chile, Costa Rica, Spain and the U.S., Magan has skyrocketed to fame. Building on the success of his groundbreaking album Suave in 2007, the Electro-Latino artist’s 2011 hit “Bailando Por Ahi” became a platinum smash, earning him No. 1 chart spots in Chile, Costa Rica and Panama, as well as a Latin GRAMMY nod. In 2012, Magan released his hotly-anticipated major label debut, The King of Dance, featuring collaborations with Don Omar, Pitbull, Lil’ John, Fuego and Carlos Baute.