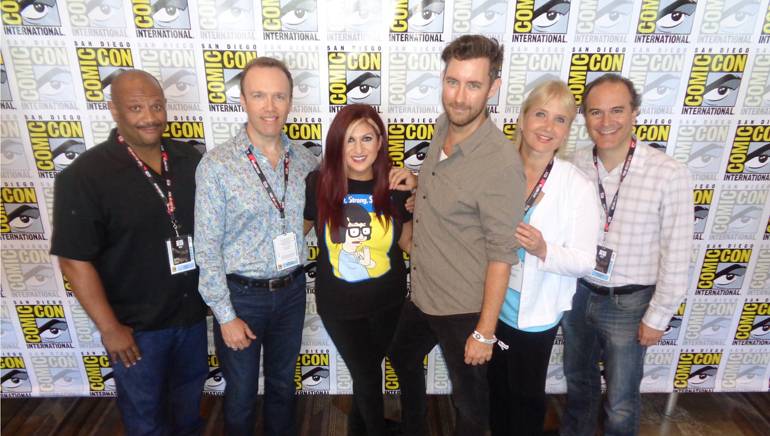 BMI and White Bear PR highlighted some of the music from DC and Marvel’s most anticipated film and TV shows at Comic-Con on Friday, July 22, in San Diego. The duo’s panel entitled “I Love That Song! Composing, Scoring, and Singing Superhero Style,” brought together an all-star line-up of renowned Emmy Award-winning composers and songwriters, including Michael McCuistion (Justice League Unlimited), Lolita Ritmanis (Spectacular Spider-Man), Kristopher Carter (Batman Beyond), and producer and lyricist James Tucker (Batman: The Brave and the Bold). During one of the panel’s memorable moments, of which there were many, producer James Tucker played a deleted scene from the animated series Batman: The Brave and the Bold that featured never-before-heard music from the show. Another highlight gave attendees the opportunity to hear the first-ever performance of the original song “I Go Looney” from the animated film Batman: The Killing Joke sung by Mark Hamill (the voice of the Joker). The show stopper was written and composed by Michael McCuistion, Kristopher Carter and Lolita Ritmanis for the blockbuster movie, which raked in an astounding $3.175 million from last Monday night’s showings alone. Known together as Dynamic Music Partners, composers McCuistion, Carter and Ritmanis also shared insights on how they have composed music for many of DC and Marvel’s other animated properties, including Justice League, Justice League Unlimited, Batman Beyond and Spectacular Spider-Man. Their original music for the new Batman: The Killing Joke film is now available on a limited-edition soundtrack CD released by La-La Land Records. The panel, which was co-moderated by Anne Cecere of BMI and Chandler Poling of White Bear PR, marks the sixth year that these two trailblazers have delivered pivotal film, TV and video game music-centered panels to Comic-Con.

To cap off the year at Comic-Con, BMI again hosted its annual private dinner, which brings together attendees including top composers, producers, directors, publicists, publishers, managers and agents. BMI’s Cecere also made an appearance at the Dynamic Music Partners signing event at the La-La Land Records booth where the Partners were signing soundtracks from their different DC TV shows and their newest soundtrack to the film Batman: The Killing Joke. La-La Land Records hosted composer signings all weekend at Comic Con. For those who did not get to purchase a soundtrack, please visit http://www.lalalandrecords.com/