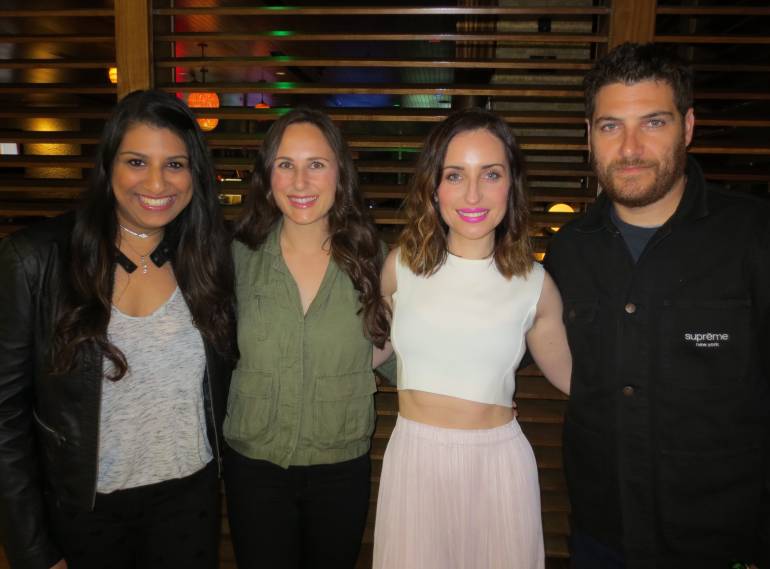 BMI was on hand in Los Angeles last weekend for the opening of Band Aid, a hilarious new feature film. The brainchild of BMI songwriter Zoe Lister-Jones, who also directed, wrote the screenplay and acted in the debut feature, Band Aid is a romantic comedy about a music-loving couple who channel their marital frustrations into songwriting and start a band with their neighbor (played by Fred Armisen) to set their fights to music. Taking their roles seriously, Lister-Jones (Life in Pieces), Adam Pally (Happy Endings, The Mindy Project) and Fred Armisen (SNL, Portlandia) actually became a real band, The Dirty Dishes, playing songs penned by Lister-Jones and fellow BMI writer Kyle Forester. With an accent on authenticity, Lister-Jones learned how to play bass specifically for the role, and she and Pally rehearsed for approximately two months before filming commenced. Armisen was quickly brought up to speed during production, being both an ardent music fan and accomplished drummer. The Dirty Dishes have since performed at Sundance, as well as the Ace in downtown L.A. after the film’s premiere.

Beyond being a high profile project for BMI writers (the film was an official selection of the Sundance Film Awards), Band Aid is also significant in that it’s a project helmed entirely by women. Aside from a few male actors, every other crew member was a woman, a decision made by Lister-Jones to highlight the lack of representation of women in television and film industries and to create opportunities.

This coming weekend finds Band Aid going into wider release in San Francisco, Boston, Dallas, Washington D.C. And, while ostensibly a fictitious band, The Dirty Dishes have just released a music video for “Love and Lies,” and their debut EP is already available on iTunes.