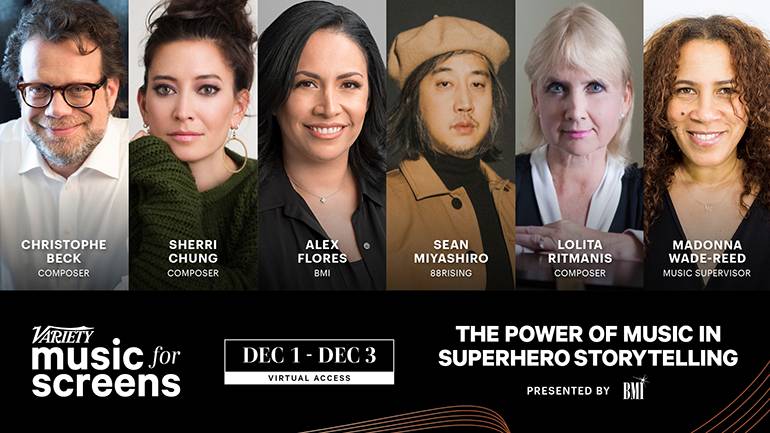 BMI Senior Vice President, Creative, Alex Flores, will proudly introduce The Power of Music in Superhero Storytelling on Wednesday, December 1, at 11:45 AM (PT), as part of the Variety Music For Screens summit. The virtual panel will feature BMI composers Sherri Chung and Lolita Ritmanis, whose music is collectively featured in some of today’s most popular superhero films and TV series, including Batman: The Killing Joke, Batwoman, Kung Fu, The Spectacular Spider-Man and Lolita’s Emmy Award-winning series Batman Beyond. Adding to the mix will be Christophe Beck, whose work can be heard on Marvel’s Ant-Man and Ant-Man and the Wasp, as well as accomplished music supervisor Madonna Wade-Reed, who has worked on the CW’s hit series Batwoman. Rounding out the unique discussion sponsored by BMI and moderated by Variety’s Adam Vary, will be 88rising CEO and producer of Marvel’s Shang-Chi and Legend of the Ten Rings, Sean Miyashiro. The talented panelists will talk about the power of music in the superhero genre and give insights on how each has brought the timeless narrative of good vs. evil to life through their craft. To register click here.