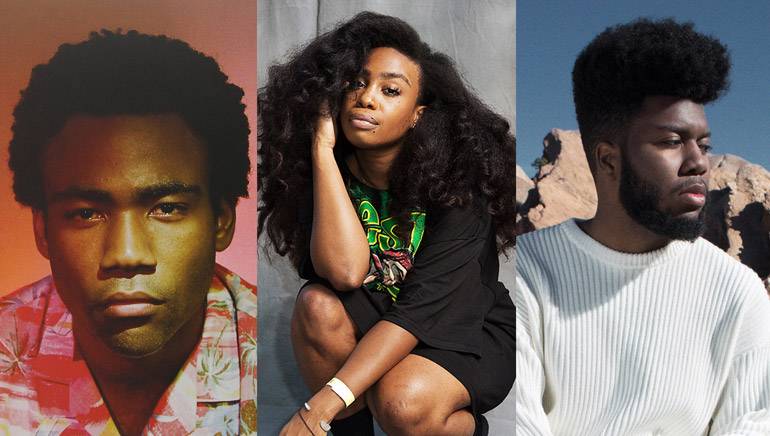 BMI is very proud to congratulate our many talented affiliates on their prestigious GRAMMY nominations, which were announced this morning by the Recording Academy. The 60th GRAMMY Awards, to be held in Madison Square Garden in New York City on Sunday, January 28, 2018, will salute a wide array of BMI songwriters and composers recognized for their contributions to the year’s most celebrated music.

Several BMI affiliates made strong showings with multiple nominations. Iconoclastic rapper Childish Gambino earned five nods, including Record of the Year for “Redbone,” Album of the Year for “Awaken, My Love!”, Best Traditional R&B Performance for “Redbone,” Best R&B Song for “Redbone” and Best Urban Contemporary Album for “Awaken, My Love!”. Also in the running for five awards is rising star Khalid, who is nominated for Song of the Year for co-writing “1-800-273-8255” by Logic, Best New Artist, Best R&B Song for his song “Location,” Best Urban Contemporary Album for American Teen and Best Music Video for Logic’s “1-800-273-8255.” R&B siren SZA rounds out the triad of BMI affiliates nominated for five GRAMMYs with her nods for Best New Artist, Best R&B Performance for “The Weekend,” Best R&B Song for her track “Supermodel,” Best R&B Contemporary Album for her album Ctrl and Best Rap/Sung Performance for “Love Galore.”

One of the year’s most ubiquitous, record-breaking songs, “Despacito,” by Luis Fonsi & Daddy Yankee* made its presence felt, snagging nods for Record of the Year, Song of the Year and Best Pop Duo/Group Performance. Alessia Cara (SOCAN) was nominated for Best New Artist, Best Pop Duo/Group Performance for “Stay” (with Zedd), and both Best Music Video and Song of the Year for Logic’s “1-800-273-8255.” For his work with Childish Gambino, composer/producer Ludwig Goransson earned nominations for both Record of the Year and Best R&B Song for “Redbone,” and Album of the Year for “Awaken, My Love!” The production team known as Stereotypes – a.k.a. Ray Romulus & Jonathan Yip – is nominated for the Producer of the Year, Non-Classical award, while, at the same time, Romulus & Yip are also nonimated for their songwriting contributions to Bruno Mars’ “That’s What I Like” as both Song of the Year and Best R&B song. From the field of music for visual media, composer Justin Hurwitz earned nominations for Best Score Soundtrack For Visual Media for La La Land, Best Song Written for Visual Media for “City of Stars,” and Best Arrangement, Instruments and Vocals for “Another Day of Sun.”

Also recognized with multiple nods is Jack Antonoff, nominated for Album of the Year for his work on Lorde’s* Melodrama and Best Song Written for Visual Media for co-writing “I Don’t Want to Live Forever (ZAYN & Taylor Swift). As co-writer of that song, Taylor Swift also earned the nomination for that award, as well as a nod for prestigious GRAMMY gold in another category, Best Country Song for writing “Better Man,” which appears on Little Big Town’s The Breaker. Logic earned two nominations for “1-800-273-8255” for Song of the Year and Best Music Video. Imagine Dragons were nominated for both Best Pop Duo/Group Performance for “Thunder,” as well as Best Pop Vocal Album for Evolve. GRAMMY first-timer Julia Michaels was also recognized with nominations for Song of the Year for “Issues,” as well as Best New Artist.

Representing rock, Foo Fighters earned nods for both Best Rock Performance and Best Rock Song for their track “Run.” Late rock legend Gregg Allman received a Best American Roots Song nomination for “My Only True Friend” and Best Americana Album nod for Southern Blood. Jason Isbell is also nominated for Best American Album for The Nashville Sound, as well as a nod for Best American Roots Song for “If We Were Vampires.” On the country front, two nods went to Little Big Town for Best Country Duo/Group Performance for “Better Man” and Best Country Album for The Breaker. From the field of classical music, composer Adam Schoenberg received nominations for Best Engineered Album, Classical and Best Contemporary Classic Composition, both for his work on Danielpour: Songs of Solitude & War Songs (Thomas Hampson, Giancarlo Guerrero & Nashville Symphony*).  From the field of contemporary Christian music, Tauren Wells received nods for Best Contemporary Music Album for Hills And Valleys, and Best Contemporary Christian Performance/Song for “Hills And Valleys.”

Once again, BMI is thrilled for all of our affiliates honored with these impressive accolades. Congratulations to all!

Record Of The Year

Album Of The Year

Song Of The Year

“What About Us”
P!nk

“Shape Of You”
Ed Sheeran

“Feel It Still”
Portugal. The Man

What If
The Jerry Douglas Band

“You Want It Darker”
Leonard Cohen

“Go To War”
Nothing More

The Stories We Tell Ourselves
Nothing More

Villains
Queens Of The Stone Age

“I Could Use A Love Song”
Maren Morris

Bigger Than Me
Le’Andria

Give Me Jesus
Larry Cordle

“I Never Cared For You”
Alison Krauss

“If We Were Vampires”
Jason Isbell, songwriter (Jason Isbell And The 400 Unit)

The Nashville Sound
Jason Isbell And The 400 Unit

Laws Of Gravity
The Infamous Stringdusters

The Queen Of Hearts
Offa Rex

You Don’t Own Me Anymore
The Secret Sisters

Top Of The Mountain
Dwayne Dopsie And The Zydeco Hellraisers

Feel What U Feel
Lisa Loeb

“Stand Up For Something”
Common, songwriter (Andra Day* Featuring Common)

Best Arrangement, Instrumental or A Cappella

“Escapades For Alto Saxophone And Orchestra From Catch Me If You Can”
John Williams, arranger (John Williams)

Every Where Is Some Where
Miles Comaskey, Tommy English, Kristine Flaherty, engineers (K.Flay)

Producer Of The Year, Non-Classical

One More Time With Feeling
Nick Cave & The Bad Seeds