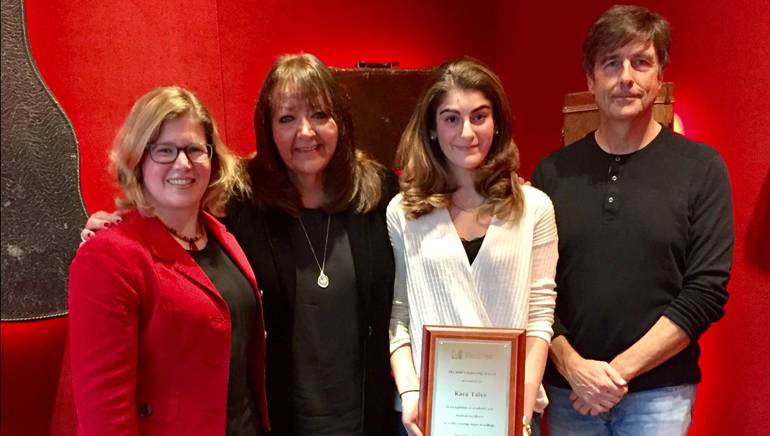 BMI Vice President of Film, TV & Visual Media Relations, Doreen Ringer-Ross, and award-winning BMI composer Thomas Newman proudly presented this year’s film scoring scholarship to Berklee College of Music student Kara Talve on November 13. The BMI-sponsored scholarship is presented each year to a film scoring student selected by Berklee’s film scoring department based on the student’s demonstrated musical ability and potential for career success. In addition to the scholarship presentation and luncheon, there was a full day of sessions, Q&A’s, meet and greets, seminars, and a keynote, in which Newman participated.

Presented each year in honor of a noted BMI composer, this year Newman was honored. The storied composer’s credits include music scored for films such as American Beauty, WALL-E, Finding Nemo, Skyfall, The Help, The Shawshank Redemption, The Bridge of Spies, Erin Brockovich, Meet Jo Black, Revolutionary Road, Brothers, The Debt and The Adjustment Bureau, to name a few.

“This scholarship continues our mission of supporting young and emerging composers at the college level,” said Ringer-Ross. “We support Berklee’s commitment to excellence in music and film scoring, and we are particularly proud to be bringing such an esteemed and beloved composer to present this for us this year.”