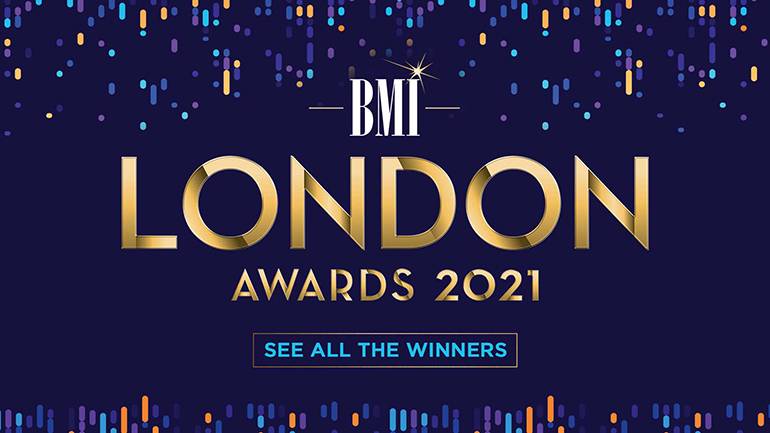 BMI proudly honoured the top UK and European songwriters, composers and music publishers of the most-performed songs of the previous year at the 2021 BMI London Awards. Rising star Arlo Parks received the BMI Impact Award, a recognition given for groundbreaking artistry, creative vision and impact on the future of music. Elusive and renowned UK songwriter and producer Dean ‘Inflo’ Josiah Cover was honoured with the BMI Champion Award, recognizing his incredible creative accomplishments and powerful contributions to culture, social policy and racial justice through his music.  Song of the Year went to the smash hit “Before You Go” co-written by Tom Barnes. In addition, Million-Air Awards, Top 30 Pop Songs and the best in Film, TV & Visual Media were also announced across BMI’s digital and social channels. Fans can listen to award-winning songs, hear special messages from some of our honourees, including the stories behind their hit songs, as well as an exclusive performance by Arlo Parks and much more on our special page.

“We’re extremely proud to recognise BMI’s top UK and European music creators and celebrate songwriting at its very best,” said Shirin Foroutan, Vice President, Creative, Europe. “This year, we’re presenting two special awards to two incredible innovators in music. The formidable Arlo Parks is receiving the BMI Impact Award for the vulnerability and authenticity she shares in her songwriting, resonating with music lovers worldwide. In addition, as one of the most transformative songwriters/producers of our time, we’re presenting Inflo with the BMI Champion Award in recognition of his groundbreaking musical achievements and collaborations, and for using his platform to champion social change to help better our world. We are privileged to represent every one of our award winners and honourees and celebrate their continued success.”

BMI Impact Award honouree Arlo Parks is quickly becoming one of the most critically acclaimed songwriters of the year. From her debut album, Collapsed in Sunbeams, which took the 2021 Mercury Prize, to receiving the 2021 Brit Award for Breakthrough Artist and beyond, Parks is a uniquely talented music creator you need to know now, and fans and critics alike agree. The Guardian stated that “the London singer-songwriter’s warm, conversational and observant debut justifies the hype,” and it’s “a diaristic, near-perfect debut.” While she’s been dubbed the “voice of Gen Z,” she’s connecting with fans of all ages about mental health and is calling for the music industry to be more open about the issue.

Ivor Novello Award winner and Mercury-nominated songwriter and producer Inflo received the BMI Champion Award. Beyond his singular talent and extraordinary musical achievements both on his own and with the enigmatic collective, Sault, Inflo’s powerful contributions to culture, social policy and racial justice radiate throughout the group’s acclaimed album, Nine, adding to his captivating projects such as Untitled (Black Is), Untitled (Rise), Michael Kiwanuka’s Kiwanuka and Little Simz’s Grey Area and Sometimes I Might Be Introvert, and his latest work on Adele’s upcoming fourth album. Of his masterful works, Music Week noted that his “music is about more than just sound, it offers compelling comment on the world we live in.”

BMI songwriter Tom Barnes, of the production trio TMS, accepted Song of the Year for co-writing Lewis Capaldi’s smash hit “Before You Go,” which is awarded to the most performed song in the U.S. during the previous year by a UK or European writer. The single spent an astounding 52 weeks on Billboard’s Hot 100 chart and completed the longest journey to No. 1 on Billboard’s Pop Songs chart since it began in 1992, reaching the top in its 37th week. In a recent BMI’s How I Wrote That Song®, Barnes noted, “the song really resonated with people during the pandemic because many had to say goodbye to people without really saying goodbye.” This marks the third BMI London Award for Barnes, who also has three U.S. Pop Awards, one R&B/Hip-Hop Award and was co-writer of BMI’s 2016 R&B/Hip-Hop Song of the Year, “Me, Myself & I.”

BMI also announced the Top 30 most-performed pop songs written by UK or European songwriters, which includes 65 first-time London Pop Award winners. Some of the new inductees include Jessica Agombar and David Stewart who are each receiving their 1st and 2nd London Pop Award for their smash hits “Dynamite” by BTS and “What A Man Gotta Do” by Jonas Brothers, beabadoobee for “death bed (coffee for your head),” and KOLIDESCOPES for “Head & Heart” performed by Joel Corry & MNEK. Other pop honourees include Anne-Marie, Niall Horan, Sam Smith, Ed Sheeran and more.

BMI Million-Air Awards were also distributed to recognise the iconic songs that have reached a million or more broadcast performances by UK and European songwriters and publishers. Elton John’s classic hit songs “Bennie And The Jets” and “Don’t Go Breaking My Heart” each reached seven million performances and “I Guess That’s Why They Call It the Blues” received six million performances. Ed Sheeran’s “Shape of You” and Nick Van Eede’s “(I Just) Died in Your Arms” performed by Cutting Crew also hit six million performances. In addition, Sheeran was honoured for “Love Yourself” with four million performances. Topping the list of legendary songwriters who have reached this milestone was Sting for 16 million performances of the timeless hit song, “Every Breath You Take,” which is the number one song in BMI’s repertoire. In addition, the BMI London Awards celebrated the UK and European composers behind the top-grossing films, top network television series and highest-ranking cable network and streamed media programs in the U.S. Icelandic composer Atli Örvarsson topped this category with six awards for his work on Chicago P.D., Chicago Med, Chicago Fire, FBI and FBI: Most Wanted, and Apple TV’s Defending Jacob.

Song of the Year

WE WILL ROCK YOU
Brian May
Queen Music Ltd.
Sony Music Publishing Ltd.

IT MUST HAVE BEEN LOVE
Per Gessle
Jimmy Fun Music

THAT DON’T IMPRESS ME MUCH
Shania Twain

Most-Performed Songs of the Year

GOT WHAT I GOT
Alexander Palmer
Thomas Archer