Posted in MusicWorld on August 19, 2022 by Cliff Goldmacher 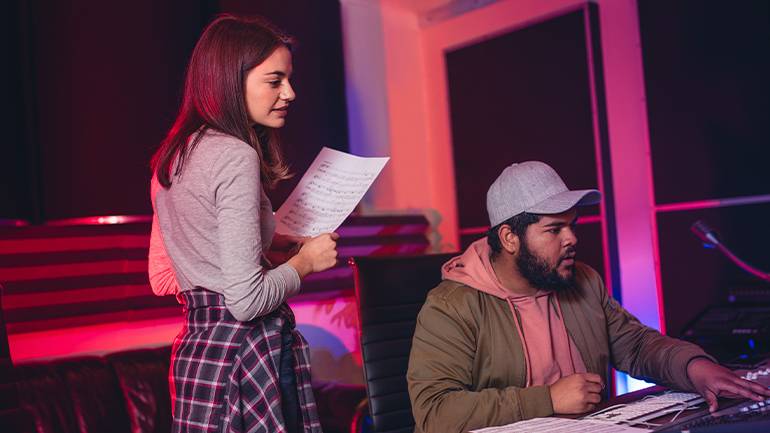 Having run a professional recording studio as an engineer and producer for close to thirty years, the process of taking a songwriter’s rough recording to a finished master is second nature to me. However, I’m well aware that for songwriters getting ready to demo one of their songs for the first time, the entire experience can be a bit of a mystery. I thought I’d sketch out the basics for you here.

1. Present the studio/producer with your rough recording
By definition, a rough recording is, ideally, a single instrument and scratch vocal singing the songwriter’s finished song. As I say in my workshops, there’s no GRAMMY award for best rough recording so there’s no need to agonize over this process. Playing and singing into the voice memo app on your smartphone is plenty. If you don’t play an instrument, not to worry, you can simply sing your lyrics and melody without an instrument because part of a producer’s job description is being able to put a chordal backing to your melody and lyric. Two things to note. First, if you’re not using an instrument, it is extremely helpful to use some kind of metronome with your a cappella rendition so that the producer can get a sense of the phrasing and timing of your melody and lyric. And second, putting chords to a melody and lyric does NOT entitle the producer to any ownership of your song’s copyright. This work is more on the arrangement side and is typically done “for hire.”

2. Hire the singer and musicians
Most studios and producers have a roster of talented and experienced singers and session musicians that they can bring in to give you a version of your song that is genre appropriate. You are well within your rights to hear a sample of the vocalist and the musicians to help you decide whom to hire. If you’re not experienced in this area, you’ll be fine hiring a producer you trust and showing them an example recording of a known artist whose song/recording is in the ballpark of the sound you’re going for on your upcoming recording.

3. Let the singers and musicians work their magic
If you’ve never been in a professional recording studio, it can be a bit overwhelming to watch great singers and players work on your music. First of all, they tend to work very quickly and precisely. My experience is that session musicians tend to get their parts down in a maximum of three passes through the song and often fewer. When it comes to the studio singers, they are typically prepared by the time they arrive at the studio having been given the rough recording in advance by the producer. My recommendation would be to let both the singer and the session musicians try it their way first. Their instincts are highly honed and they’ll often bring more to the recording than you could have imagined possible. That being said, if you’re missing something or want to refine part of a vocal or musical performance, it’s enough to ask politely when you can give feedback and then be as specific as possible. Often the producer will act as a go-between so that your requests are being explained to the singer and musicians in a way that they can quickly understand and execute. It’s not uncommon for a single song to be recorded (vocals and instrumental work) in 60 - 90 minutes.

4. Rest your ears until it’s time to listen to the final mix
Participating in a studio session, even if you’re just observing, can be an emotional and draining experience. It’s important to take a deep breath and remember that everyone involved from the producer to the singer and players all want you to be thrilled with the final result. Referrals are, after all, a big part of how these folks make their living. That being said, stepping away after the tracking session is a good idea. Simply let the engineer and/or producer know that you’ll look forward to hearing the final mix when it’s ready.

5. Listen to the final mix a few different ways and places
Once you’ve been given the final mix to review, try listening to it in a variety of different environments to make sure that, most importantly, the vocals are clear, and the instruments are balanced with one another. Know that your demo will always sound more impressive on big speakers or under a set of high quality studio headphones, but the mix should still be clear on everything from a car stereo to ear buds to your laptop or smartphone speakers, too. If you have any comments or requests to make about the mix, I’d highly recommend writing them down on a printed lyric sheet so you can be very clear and specific about any changes you’d like to have addressed.

6. Trust is the key
If you’ve hired experts to record a quality version of your song, then the very best thing you can do is to trust them. I’m well aware that music is a subjective medium, but I’d highly recommend deferring to the professionals when it comes to a studio recording. This is not to say that you can’t ask questions - you should - or make requests for tweaks if you feel they’re necessary. It is, after all, your song and you should be thrilled with the final result.

Working in the recording studio is a world unto itself and can take years to genuinely understand. I’ve put together an overview from 20,000 feet to, at the very least, demystify the process. Know that a professional recording is a critical part of getting your songs the attention they deserve and when done properly can elevate your song to a new level of polish. My wish for you is that when you’re writing songs that you’re proud enough of to want to take them to the next level, you’ll feel confident scheduling your professional demo. When you do, the above suggestions should make the process a more enjoyable and productive one.