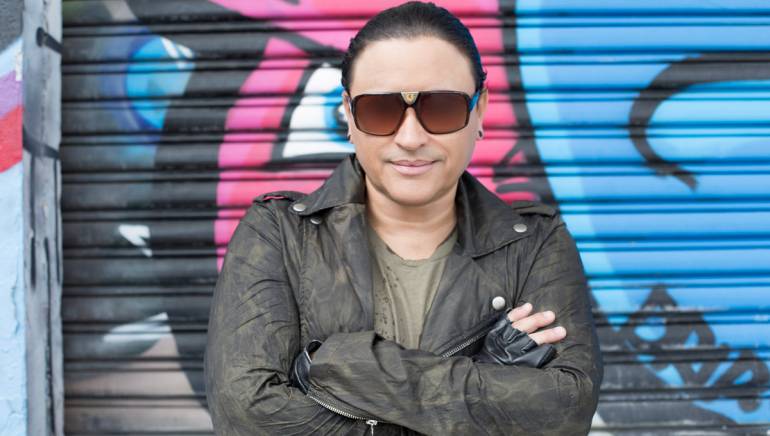 BMI songwriter Elvis Crespo has a rule. When he’s in the studio listening to new music and it doesn’t move him, then it’s not ready and more work needs to be done.

“When I get up from my seat that means an audience will get up and dance when they feel the song,” says Crespo, who is celebrating 20 years as a songwriter with BMI.

Crespo’s current hit “Bailar,” a collaboration with Mexican American DJ Deorro, was a chance for the veteran singer to mesh tropical and EDM—something that was a no-brainer, he says, because he has long admired the work of Deorro in addition to wanting to try something new.

It’s no mistake that catchy “Bailar” is approaching nearly 30 million views on YouTube, while Crespo works on a new album of merengue music slated for 2017 and while he promotes “Bailar.” He keeps reminding himself that while technology has changed the music industry, it’s still quality that counts and the ultimate marker of success is when the public says a song is good.

The singer, 45, began his career in the 1990s when he joined Grupo Manía before going solo in the late ‘90s. Front and center has been merengue in a genre that has been good to him. But taking risks, too, is something that the entertainer enjoys as part of a creative field that has established him with songs such as the classic “Suavemente.”

“Suavemente makes me proud,” Crespo says. “It been heard around the world and still feels current. It’s a song that people connect me with and that is something special.”

Crespo took time out from a packed schedule to talk about his new collaborations, how technology has changed music and how people at airports approach him when they see him.

Can you talk about the “Bailar” project, which is a fusion of EDM and tropical rhythms?

I got a call from Sony to record with Deorro and I loved what he was doing and I never close myself to collaborations. It was an opportunity to explore something different.

You have been a regular on the charts with many songs, including “Bailar.” At this point of your life, what do these accolades mean to you personally?

I never go to the studio looking for a hit. Everything has to come from an organic place because there are so many elements. When I’m in the studio, I do think about the song and how it evolves and if it will make people feel something and if it will get people to move. Sure, there are songs that don’t necessarily do well, but that’s no reason to feel bad. Instead, I look to reinvent myself and I keep creating until I create something that I really love.

Your music has reached a global audience and others like Jennifer Lopez are often seen enjoying your music. What does it mean to you that your colleagues and fans alike make you a big part of their playlists?

I am extremely thankful to God for giving me a voice to be able to sing. I don’t consider myself an excellent singer, but I do consider myself a singer with a particular voice. I know my strengths as a singer and I know what I can do with my voice when I arrange music that people can dance to, and that’s always something I’m very aware of.

How do you define your musical style?

I consider my style very universal because I’ve had the opportunity to hear people from all over the world who are listening to my music. I get messages from Japan, Australia, and France. My music is accessible to many no matter where they are located. But after traveling so much during my career and having met so many people, I think my sound is also multicultural and reaches many music lovers.

Technology and social media have changed the music industry in so many profound ways. What is your outlook on the digital landscape and how you deliver your music?

To be honest with you, at first I resisted social media. I’m from the school that came up from radio and television. At first these new platforms seemed difficult for me. I had the blessing that I was surrounded with people who understood the new ways of technology. We have to realize that the world is much smaller with social media. Now I look to expand and distribute my music through social media and it’s certainly a key part of growth.

Does technology make you think differently in terms of releasing music in full albums or singles?

I think I’m very open-minded to all possibilities. I do focus on singles because people like that, but I also come from a generation that enjoys buying CDs, and yes, perhaps there are many who may not appreciate those traditions. Many of us still like a whole product that comes with liner notes, lyrics and everything that the traditional release gives fans. But I also understand that in society today we want something fast and now. We can’t ignore that there is a market for this and we should keep that in mind, but certainly an old school way of doing things sometimes is a great thing as well.

What are you working on now and what’s the inspiration behind your latest projects?

I never stop working. We have been working “Bailar,” which has been doing well. It’s important to keep pushing it. There are also music videos, one with Pitbull and Deorro, there’s a version of the song in English and there’s talk about more collaborations. I’m also working on a new album themed around merengue and bachata slated for release in 2017. Thankfully, there is a lot for work.

When you were a teenager you were part of Grupo Mania. What did those years mean to you and what did you learn?

I sang background vocals before that and really I was a dancer early in my career. Little by little I got education and worked on my vocals. I learned a lot and never gave up. This is a tough industry and there are musicians that compete against each other. I’m about what the audience dictates. I want audiences to tell me what they want and it’s important to follow that direction and that has led me to many opportunities including being part of Grupo Mania.

“Suavemente” is a classic; what does it mean for you today?

It’s a song that still works today. It’s like I recorded it yesterday. The song is bigger than Elvis Crespo and that’s magical. There are big recording artists that don’t have a song and I am thankful for that song and that people see me at airports and say, “There goes Suavemente.”

Talk about your relationship with BMI.

It all started with my first song “Linda eh” in 1995, when Grupo Mania signed with Sony. When the single became well known, I met with the BMI team … wow, 20 years already. They have been with me from day one. It’s been a wonderful relationship for so many years. They have believed in me like a composer and I am forever grateful for that unmatched support.