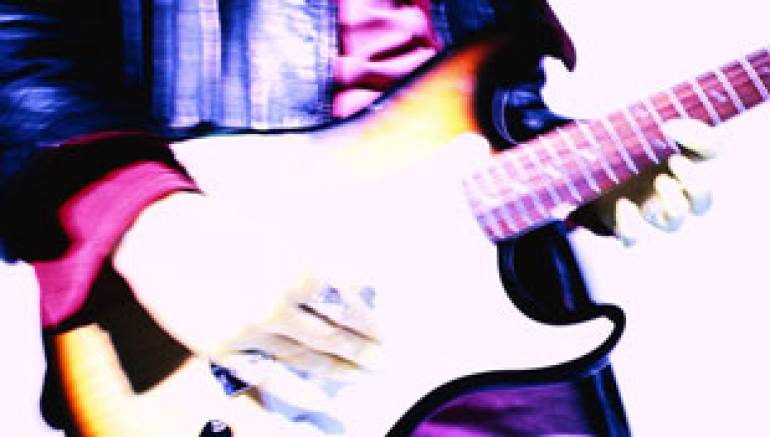 If you really want to know how to put together a killer recording, why not just ask someone who’s actually done it? Well, this month, that’s exactly what we’re doing - by calling upon one of the all-time wise men of the modern studio era, the U.K.‘s legendary producer/engineer Tony Platt. It was exactly 25 years ago this week that Platt entered the studio with a quintet of scruffy ex-Aussies named AC/DC and emerged six weeks later with Back in Black, for many the single-most essential hard-rock record of the modern era. Like most milestone efforts, Back in Black had little to do with pop trends of the time (which, in 1980, was all about skinny ties and Farfisa organs). Instead, with Back in Black, AC/DC - guitarists Angus and Malcolm Young, bassist Cliff Williams, drummer Phil Rudd and vocalist Brian Johnson - delivered a set of ironclad songs that were stripped to the bone, jacked up at the bottom and outfitted with some of the most tastefully lean guitar accompaniment on record.

To help the band achieve its multi-platinum apex, Platt, an engineer of impeccable good taste, utilized a handful of tried-and-true recording techniques, including clever miking, skillful mixing, allowing for maximum room sound while keeping processing to a minimum. It’s the kind of stuff even we mere mortals can benefit from today.

Back in Black marked a turning point in AC/DC’s career. Highway to Hell, issued a year earlier, had finally pushed the group into platinum territory. But, as the band was pulling together material for the all-important follow-up, in February 1980 original vocalist Bon Scott died, and the band’s future seemed uncertain. Determined to push on in spite of the circumstances, in March the group hired Newcastle-based vocalist Brian Johnson to fill Scott’s shoes, then immediately began rehearsing at London’s E’Zee Hire Studios. As a diversion, that May the group repaired to the tropical surroundings of sunny Nassau and the newly constructed Compass Point Studios, where they were joined by producer Robert John “Mutt” Lange, an unlikely ally whose ear for slick pop nevertheless lent a subtle but essential mainstream sensibility to the proceedings. There, the group prepared to cut tracks for their forthcoming Atco effort, Back in Black.

With AC/DC, it had always been about the riff - and on Back in Black, there would be plenty of them: “Hells Bells,” “Shoot to Thrill,” “You Shook Me” (eventually the band’s first Top 40 hit) and the unrelenting title track featured the dynamic interplay between Angus’ right-channel SG lead and brother Malcolm’s left-channel Gretsch rhythm. From his control-room vantage point, Platt realized the sound he was after was already coming through the monitors; processing and other add-ons would be purposely left off the rhythm tracks. “We all had a good idea of how we wanted it to sound right from the start,” says Platt, “and so our goal was to get it on tape there, rather than leaving it for the final mix. Being restricted to 24 tracks meant that a lot of the decisions would be made early on, which also added to the feeling of immediacy. But most off all, they just played it like it is! There was hardly any patching required - we’d just cut takes until we had a nice balance of perfection and feel.”

As so often happens, on Back in Black the make-up of the studio itself helped determine the recording dynamics. “The set up and approach was quite different from Highway,” notes Platt, who’d come aboard during the mix phase of the previous album. “Highway had been recorded in a very dead studio, so much so that during mixing I’d fed various parts back through the speakers and into the studio, recording the result for extra ambience. So when it came time to do Back in Black, the idea was to get that ambience on tape right from the start. The room at Compass Point was fairly large but had a low-ish ceiling, which concerned me a little as I didn’t want the room to compress the sound. We spent some time choosing the right position for the drums by hitting a snare in various parts of the room. I discovered a ‘sweet spot’ where the snare suddenly sounded bigger, deeper, fuller and most important, snappier. I subsequently discovered that there was a void above this position that was obviously allowing the sound to rise without choking it!”

For Angus’ solo tracks (which were overdubbed), Platt employed two stacks, one in the main room and another in a live chamber at the far end of the building. “We used Angus’s radios to transmit to these amps,” says Platt. “The radios actually proved to be quite an important part of the sound, as they added some mid bite. I used two Neumann U67s on each cabinet, so I could pan the result where I wanted. And absolutely no compression was used at all.”

Despite the volume at hand, Platt encouraged leakage in order to maintain the ambient element. “We kept Cliff’s bass in a separate booth so that Angus and Malcolm’s guitars could really bleed into the room,” says Platt. “There was some screening over the amps, but it was minimal. For Phil drums, I kept several room mics up at all times, which I would move around depending on the effect I wanted to achieve. But really, it was mainly just tuning the drums carefully to get the sound as close to where we wanted it, with the overheads providing most of the texture.”

For newcomer Johnson, cutting vocal parts worthy of his predecessor was only half the battle; crafting lyrics that fit the AC/DC sex/rock/mayhem mold turned out to be the most daunting task of the entire six-week affair. “Because the lyrics were written as we went along, all of Brian’s vocals were overdubs,” says Platt. “But that turned out to be for the best anyway, as one of Mutt’s finest attributes as a producer is his ability to enable the singer to perform to the best of his abilities.”

Mixing for the album took place at Electric Lady Studios in New York shortly after the sessions were completed. “The size of the sound is really a combination of things,” says Platt. “The tuning is good, the arrangements are spacious, the recording isn’t heavily processed, aside from some subtle addition of delays and light reverb just for extra ambience. I remember we also monitored quietly so we could balance carefully.”

Coming off years of synthesized disco and overproduced AOR, Back in Black proved once again the resilience of live, loud and melodic rock, and listeners immediately responded. At 20 million and counting, today the band’s seventh major-label release ranks as the sixth best-selling album of all time.

“Probably the biggest buzz I’ve ever had during my time in the business was walking into Madison Square Garden one evening and hearing Back in Black coming over the house P.A.,” notes Platt. “The engineer told me he always used that album to run up a P.A., because if it sounded good with Back in Black playing, then he knew he had it! I can’t think of a better endorsement than that.”