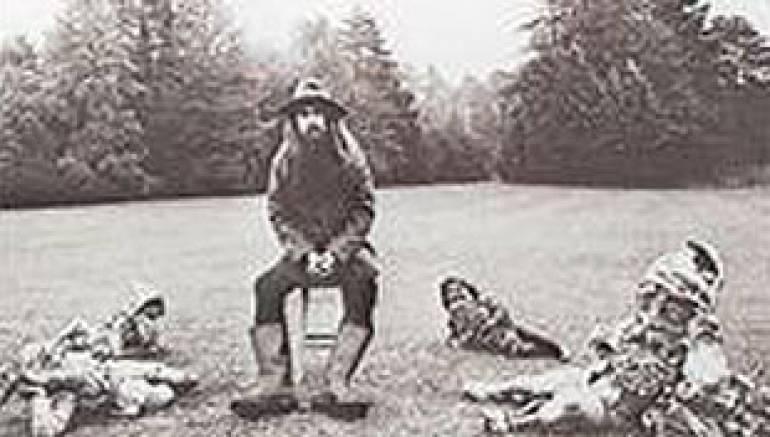 To the casual Beatles fan, George Harrison was the unassuming sideman, the sitar-playing spiritualist and competent composer whose occasional song contributions (“Something,” “Here Comes the Sun”) made a ripple or two in the stream of Lennon-McCartney classics.
Peel back another layer - as Beatles archeologists are wont to do - and there exists a far more intriguing portrait of the man and his music, one that is significantly more complex and, unfortunately, not nearly as well-documented.

It was 1970’s solo outing All Things Must Pass that provided the first hint that a fair share of Harrison’s musical talent had been donated anonymously during his years as a Beatle. Meticulously orchestrated and containing over a dozen songs left over from the end of the Beatles era, All Things Must Pass demonstrated that not only could Harrison play choice lead guitar, he could also write, arrange, overdub, produce, mix and edit - and reach No. 1 with a hook about a religious cult.

By the time the Beatles announced their break up in mid-1970, Harrison’s collection of songs, which included several intended for the Beatles but deemed unfit by Sgt. McCartney, was enough to fill two full discs. One of those tracks was a pensive ballad that reflected the influence of the Band’s 1968 debut Music from Big Pink. As the title song to Harrison’s first post-Beatles collection, the Robbie Robertson-esque “All Things Must Pass” became a fitting and poignant statement of independence.

In May 1970, Harrison sat down with producer Phil Spector (who would also record John Lennon’s solo debut later that year) and committed to tape acoustic demos of tunes like “I’d Have You Anytime” (co-written with Bob Dylan), “Let It Down” and the beautiful “Beware of Darkness.” Weeks later, Harrison entered EMI’s Number Three studio - the same room used by the Beatles to record the Revolver album just four years earlier - with a backing band that included guitarist Eric Clapton, pianist Leon Russell and faithful friend Ringo Starr on drums, and began picking through the large stockpile of songs.

For extra texture, guitarists Joey Molland, Pete Ham and Tom Evans from Badfinger were installed as an all-acoustic rhythm section.

“The band was set up in the room with no baffling,” recalls Molland, who played a Gibson J-50 acoustic for the occasion. “Clapton sat in the middle, with a Fender Champ and a Leslie speaker nearby. George would come in, and just go around to each of the players one by one and show everybody how the song went. You know, ‘This one’s called “Isn’t It a Pity”,’ and he’d run through the changes on his acoustic. We had to learn everything very quickly, just sort of absorb the general texture of each song. But that’s what he hired us for, really: to lay down this very uniform acoustic backing. Which meant we really had to concentrate on getting our strumming in sync.”

If Harrison was eager to make a big statement, he had the right man in producer Spector, creator of “wall of sound” hits like “Be My Baby” and “You’ve Lost That Lovin’ Feelin’.” In his inimitable fashion, Spector recorded the musicians live with little separation, making liberal use of EMI’s cavernous chamber echo, which Spector added during the recording itself (thereby preventing Harrison from de-emphasizing the heavy reverb for the album’s CD release in 2000). To keep the acoustic guitars prominent, the members of Badfinger were assigned their own quarters for the duration of the sessions.

“They put the three of us inside this huge blue wooden box made out of plywood, with doors in the front of it,” says Molland. “Every day we’d go in there, get on these tall stools, they’d mic us up, and we’d begin recording. That was the only separation they used for the whole album. Luckily they kept the doors open while we were working!”

Throughout the sessions, Harrison made rough two-track mixes so the players could hear the work in progress. “It sounded great as it was going down,” recalls Molland. “I remember listening to the rough-mix of ‘My Sweet Lord’ - the balance was all there, everything was so full-sounding. The acoustic guitars were just enormous - there wasn’t any double-tracking or anything, just all of us going at once, straight on.”

Issued on November 29 (ironically the same month and day as Harrison’s passing 31 years later), the exquisitely detailed All Things Must Pass - the first solo Beatle album to reach number one - made it obvious that Harrison had played a far more significant role in the making of the Beatles legacy then we’d been led to believe. The three-disc effort covered an impressive array of styles, from authentic country (“Behind That Locked Door”) and acoustic pop (“Run of the Mill,” one of Harrison’s best) to Beatlesque rock (“What Is Life,” his second Top 10). Issued as the album’s first single, “My Sweet Lord” gave Harrison his first chart-topping hit - and led to a bizarre plagiarism suit years later.