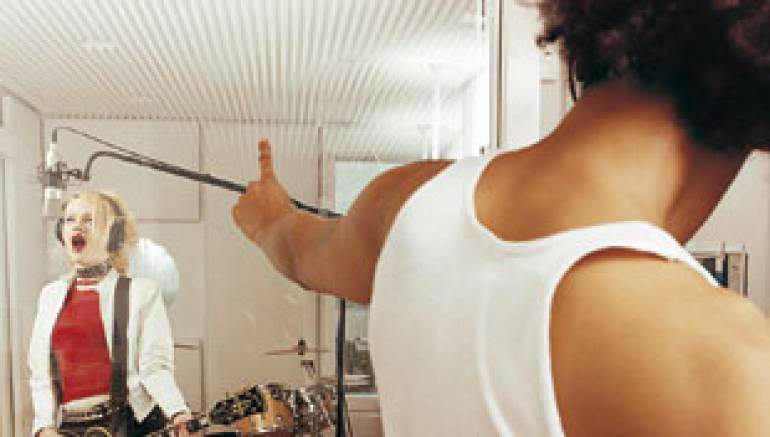 When it comes to embellishing your work in progress, a well-crafted backing vocal can go a long way. Background harmonies not only add flavor and make a nice production technique, they’re often the hookiest part of the whole song. If you’ve come up with a clever backing bit, naturally you’ll want to make sure you record it properly. To that end, we asked a few experts to give us some background on cutting good-sounding background vocals.

Changing the “Voicegram”
Back in the ‘60s, producer/engineer Brooks Arthur, the man responsible for dozens of classic girl-group hits by the Shangri-Las, the Cookies and many others, developed a unique method for recording background harmonies. “One of the essential ingredients on those girl-group productions was doubling and tripling the backing vocals,” says Arthur. “But the thing that really made it work was moving the girls to a different spot around the mic for each overdub, so that the mic would be picking up a different ‘voicegram’ - that is, same singers, but the new positioning would somehow make it all sound fuller. That formula remained a constant for me through the years.”

When doing the overdubs, Arthur would typically record the vocals using a three-partition room separator, positioned about 10 feet from the control room window. “That way, we could utilize the height of the ceiling, the sound of the room, even the vocal deflection off the window.”

One for All
Recording multiple singers doesn’t necessarily mean that you have to use multiple microphones. Many engineers prefer grouping background vocalists around a single omni-directional microphone and allowing the singers to balance themselves live, rather than “riding” individual vocal tracks. Roy Halee seldom strayed from the one-mic method during his tenure with Simon & Garfunkel. “Whenever I tried isolating Paul and Artie on separate microphones, it never worked - the blend just wasn’t the same,” recalls Halee. “When the two of them were singing together live, something would happen in the sound field between their voices and the mic that was magical. That’s just the way it happened. The minute you’d put a piece of cardboard between them, it went away. So I’d always insist that we do it live. And occasionally we’d get into some pretty heated discussions about it, too!”

Halee also preferred fleshing out the vocal parts with an additional layer. “It wasn’t really doubling, it was more 3/4 original to 1/4 overdub,” says Halee. Of course, a great mic was always a necessary ingredient. “I’d use a good tube mic, like an old Neumann U67, or an M49. The choice of microphones is really important, obviously, but I was always adamant about keeping everything as clean as possible on the way to the recorder - the channel, the pre-amp, everything.”

Monitor Method
If you have a small group of singers but you’re short on headphones, no problem - next time, try recording the backing vocals right in the control room while running the reference track through the monitor speakers at a moderate volume, perhaps rolling off a bit of the bass in order to control leakage (you could also try using a dynamic microphone or a condenser mic in cardioid position, with the singers facing the “live” side of the mic). Producer Elliot Mazer used this method on Neil Young and guest vocalists James Taylor and Linda Ronstadt during the making of Young’s classic Harvest album. “We’d just finished the rhythm tracks for ‘Heart of Gold’ and had agreed on the master take,” says Mazer. “Neil, James and Linda came into the control room, sat down on the couch, we put up the mics, and rolled the playback right through the big speakers we had in there. That’s how they cut those background vocals. Normally you’d put on the headphones and get in a separate room and do it that way. But this worked out great - and it also kept the live feel intact.”

Finishing Touches
When mixing your background vocals into the completed track, be creative. If you’ve layered the vocal parts, try spreading the separate tracks across the stereo field - start hard left and hard right, then gradually move each part toward the center until you achieve the right balance (and there’s nothing wrong with stacked vocals in mono, either). A bit of echo or delay (or delayed echo) never hurt, particularly when applied to stereo vocals; for a really atmospheric sound, increase the effect level (while decreasing the direct signal), suitable on generic bits like “ooo’s” or “ah’s.”