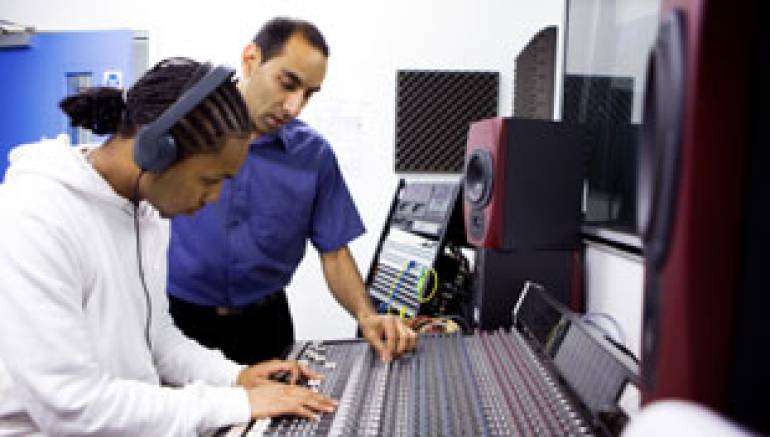 What Is A Producer?
The best way I know to describe what a producer does comes in the form of this analogy: A producer is to a recording as a director is to a film. When it comes to making a film, the buck essentially stops with the director. It’s the director who steers the ship, working with everyone from the technical editors to the actors in order to achieve his or her overall vision of the movie. It is exactly that way with a producer when it comes to making a recording. Not only must the producer have the experience to work with the studio engineer (often possessing the technical expertise to engineer the project themselves) but the musical understanding to help the artist with everything from song choice, structure and arrangement to the all-important vocal performances that are vital in giving a recording its personality. In short, a producer provides the experience and necessary perspective to guide a recording from start to finish.

Producer Backgrounds
Producers can come from a variety of backgrounds. I’m listing the four most common and what each brings to the process, but, typically, producers have experience in more than one of these areas.

1) The Songwriter - Since at its essence, a recording is dependent on the quality of the song, the songwriter/producer is heavily involved in the song selection process. Not only does this type of producer have experience in knowing what does and doesn’t work when it comes to pre-existing songs, but often this producer will co-write songs with the artist for a given project.

2) The Musician - Here, it’s often an instrumental and music theory background that gives this type of producer their experience. They have first-hand knowledge when it comes to working with musicians and knowing what instrumental approach will work best in a given situation.

3) The Engineer - In this case, the producer’s primary experience comes from actual recording (i.e., placing microphones on drum kits, recording vocals and mixing albums). By becoming an expert in the nuts and bolts of the recording process, an engineer/producer can make the recording process a smooth one for the artist.

4) The Music Fan - This is someone who lives and breathes music and has the instincts to guide artists and session musicians through the recording process without necessarily having had the “hands on” experience of being a songwriter, musician or engineer themselves. They often bring great perspective to a situation where being too close to any one part of the process might compromise the overall recording.

What Do Producers Do?
As I’ve mentioned, producers can be involved in many different aspects of a recording. Some producers are very “hands off,” acting mostly as the voice of experience and perspective for artists who already have a fairly clear idea of who they are and where they’re headed. On the other end of the spectrum are the producers who are involved in every element of the recording from co-writing the songs to engineering to playing one or even all of the instruments. In some, but certainly not all, of these cases, the resulting recordings have such a distinctive sound that the producer becomes as associated with the recording as the artist themselves. For the record, no one way takes precedence over any other for producing a recording. The only measure of a producer that matters is whether or not the resulting recording is satisfying to everyone involved. As most producers operate somewhere in between minimal and complete involvement, here are the main areas where most producers do their work.

1) Pre-Production - This includes working with the artist to decide if the songs are as good as they can be and, ultimately, which songs would work best as a group for an album release. It also includes deciding on the overall sound of a recording, which involves deciding which session musicians/instruments would be best suited to achieve the sound and feel of a particular song

2) Instrumental Recording/Arrangement - At this point, the producer works with the assembled musicians and helps direct their performances in the studio in order to achieve a cohesive sound for the recording.

3) Vocals - Finally, because the typical music listener responds first to the voice of the singer, one of the most important roles of the producer is working with the vocalist to help them give their best, most sincere performance of their material. It is extremely difficult for even the most experienced vocalists to have any perspective on their performance while it’s happening. For this reason, a producer is the voice of reason and experience who knows how to encourage a vocalist to do one more vocal pass or helps them realize that it would be better to take a break and come back to fight another day.

How Do I Find A Producer?
For those who are new to the process of recording, whether it’s an album project or even a song demo, it is unclear where to look to find a producer for your project. Generally speaking, word of mouth in your music community serves as the best, most organic way to find a producer right for your project. Another effective way to find a producer, particularly if you’re interested in doing a whole recording project, would be to look at the liner notes on some of your favorite independent CD projects made in the city where you plan to record. Often, those producers are available for hire and it’s just a matter of getting their contact information that the artists themselves usually have. Finally, there’s no rule that says you can’t contact a well-known/successful producer whose work you admire. Maybe they will be too busy or too expensive to work with, but you never know and if you’re respectful in your request there’s no reason not to try.

At the end of the day, it’s a good working relationship and the trust between artist and producer that makes for the best results. So, be sure that you not only like a producer’s work, but afeel comfortable working with them as well. You’ll be spending a lot of time with this person and trusting them with your art, so make sure that you feel like the producer you choose is willing to give you and your music the attention necessary to get a great recording.

A twenty year veteran of the music business, Cliff Goldmacher is an engineer, producer, musician and owner of recording studios in Nashville and New York City.  Cliff’s book “The Songwriter’s Guide To Recording Professional Demos” is available as a free download from http://www.cliffgoldmacher.com.