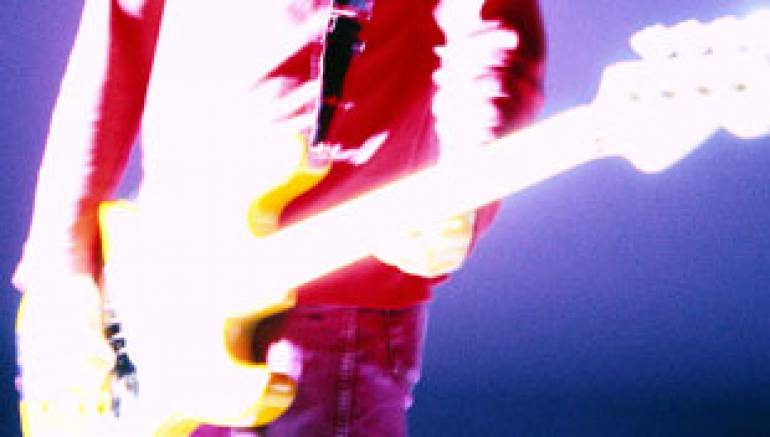 The multiplying Marshalls on display in The Darkness’s “I Believe in a Thing Called Love” video is the oldest joke in the book: Every guitarist has, at one time or another, harbored secret fantasies of engaging in such sonic warfare. And why not? After all, that’s how guys like Jimmy Page and Neil Young got those great guitars on tape, right?

Not quite. Though it may come as a surprise, some of the recording world’s most coveted electric bits were the work of a few mighty midgets. Check out the Led Zeppelin exhibit at Cleveland’s Rock & Roll Hall of Fame, and get a load of the quintessential mouse that roared: a puny, beat-up Fender Supro that Page used to create the super-sized sounds on much of Led Zeppelin I.

The kicker is that even us mere mortals can afford the mechanism necessary to create such super-natural sounds in the basement.

Start Small
When looking for a big electric sound for recording purposes, tube amps are, and have been for eons, the most desirable medium. Power-tube distortion is the most versatile of all fractured guitar sounds; it’s warm, round and easy to harness. How small? That depends on your specific application. If you’re locked in a 12x12 room most of the time, the smaller the better - as in 15-watts, even less. I own a pair of late ‘50s Gibson amplifiers - one 14 watts, the other barely 5. The smaller of the two, a Gibson Skylark, probably wouldn’t make it beyond the first row if used live - but in the basement, it sounds like the anti-Christ when set on 10.

Finally, using a guitar with a “hot” pickup (such as a humbucker) is preferable, since it will hit the pre-amp that much harder and therefore drive the power tube that much faster.

Miking Up Your Amp
When it comes to recording off a guitar amp, all you really need is one inexpensive Shure SM-57, situated just a few inches (or even less) from the grille cloth. There’s no need to mess with EQ, either; just strap on a pair of closed-cup headphones, plug in your guitar and then strum a few notes while adjusting the angle of the mic. Point it directly at the cone gives you a brighter sound, or move it slightly off-center for a rounder tone.

For a more dynamic-sounding guitar track, place a second microphone (ideally a condenser mic, but anything will do) on a boom stand at least six feet back from the amp. Adjust the volume and then pan each track to taste; the farther apart in the stereo field, the more “live” the sound will appear.

Leave Space
When adding electric tracks - and particularly when doing demo work - keep it simple; the last thing you want to do is overcrowd the mix with an excess of flashy guitars. The two-mic technique above will give you plenty of dimension; or if you’re using a single mic, when it’s time to mix, try moving your guitar track off to one side, then add a splash of reverb with the return delayed (so that the guitar echo “jumps” to the opposite channel)-a technique employed by many an engineer working with a one-guitar lineup.