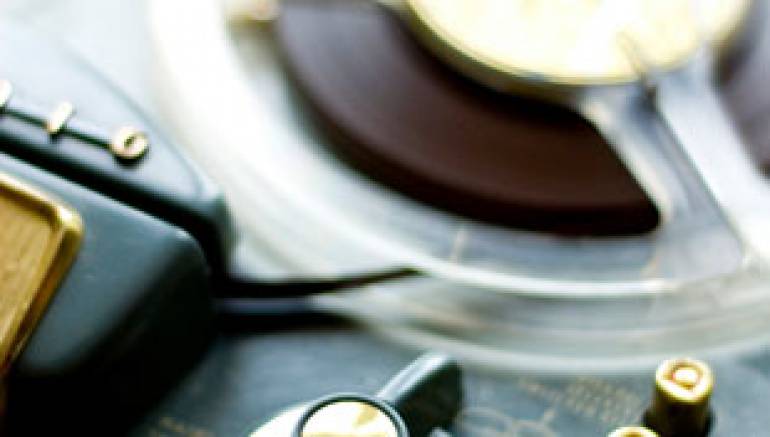 If today’s digital recording apparatus can do everything from soup to nuts and only cost a few hundred bucks, why is eBay still brimming with clunky old reel-to-reel tape machines? Unlike their significantly lighter (and user-friendlier) digital counterparts, a tape recorder requires some degree of discipline and patience. And yet even now, home recording people of all ages are drawn to these reel-to-reel relics. For some it’s mainly about aesthetics; there’s nothing like the sight of a reel spooling backward to add an element of old-world realism to the recording process. But there’s more to it than just appearances.

While professional-grade reel-to-reel recorders (i.e., those using �” tape or wider) in good condition can still fetch at least four figures, �” stereo tape machines - also known as “4-track” machines for their ability to record two separate tracks on both sides of a reel of tape - manufactured for the consumer market during the ‘60s through the ‘80s can be had for as little as 50 bucks nowadays. These recorders, which typically use 7” reels (or occasionally 10”), include models made by Sony, Akai, Teac, Revox, Roberts, and Fostex. If you’re curious about working with tape but don’t want to make a major investment, this is the way to go.

Why Use Tape?
For starters, tape recording is fun, a nice diversion from the no-brainer digital domain. Using a simple tape machine is a great way to make quick demos, and the limitations of working with just two tracks keeps the process from getting out of hand. Pausing between takes, or spooling back and forth while waiting for the counter to return to zero, gives you time to think about your next step. And a tape recorder in good working condition also sounds quite nice - that “warm analog” myth isn’t really a myth at all.

Another reason for using tape is the ability to create your own organic sound effects such as delay and echo (a time-honored tradition). Tape echo - discovered by the late, great guitar-maker/inventor Les Paul way back when - allows the user to take advantage of the natural delay that occurs from the tape passing between the record head and the playback head on a three-head machine. Running the tape at a faster speed produces a very quick echo (known as “slapback,” a favored technique of early rock artists); reduce the speed and the delay increases exponentially. Feeding the signal into a mixer and then back to the tape machine “regenerates” the effect, resulting in a feedback loop of multiple echoes that you can then manipulate by increasing or decreasing the volume of the original signal, the echoed signal, or both (in the process creating everything from cavernous echoes to flange- or chorus-type effects).

Because tape echo is a live effect that is used during the recording (as opposed to being added afterwards), it tends to influence the performance itself. The Beatles’ “A Day in the Life” is a great example of tape echo in action: While recording John Lennon’s vocal overdub, the engineers simply fed the echo straight into Lennon’s headphones, allowing him to use the delay as a rhythmic effect.
Budget Tape Machine Shopping
There are several different types of tape machine to choose from, including those outfitted with either two or three heads (in general having a separate record and playback head is preferable, since it allows you to produce echo and also makes overdubbing, or “sound-on-sound,” possible). Some machines have their own amplification and include volume and tone controls as well as speakers (which may or may not detach), eliminating the need for an external-power/EQ source (those without built-in power are commonly referred to as simply “decks”). Many operate at three speeds (typically 7 �, 3 � and 1 7/8 inches per second), while others only use two. Though two-track stereo is the most common denomination for machines using �” tape, mono is also available, as well as four- and eight-track (which can cost significantly more).

Browse eBay or Craigslist, and you’re bound to find literally hundreds of �” tape machines to choose from. Prices range from as low as $25-$50, to $200-$400 or more, depending on the age and quality of the machine. Those who service and restore older machines are generally the most reputable sellers, but they also tend to charge top dollar. Some claim that tape decks purchased from anyone other than an analog expert are a total waste of money. While admittedly riskier, it is still possible to get a quality recorder from any third-party seller, and for an extremely good price. I recently found a Sony TC-355, a popular three-head deck from the early ‘70s, for a mere $30 (plus shipping). The machine had only one minor flaw - a sticky playback lever - and was in otherwise excellent condition (and I was able to fix the problem for just a few bucks more).

However, to avoid purchasing a worthless hunk of junk, be sure to ask the seller some specific questions about the operating condition of the machine. For instance, does the transport (fast-forward, rewind) appear to run smoothly? During playback, does the tape maintain its proper speed, without any noticeable changes in pitch or tone? Is the erase head functioning properly? Whatever you do, never buy any recorder that is listed as “untested” or “powers up, but unable to test with a tape,” or any other lame excuse. Some sellers may advertise a recorder as “rarely used, in like-new condition.” While this may in fact be a good thing, just make sure that “rarely used” doesn’t mean “sitting in the basement collecting dust and rust for the past 32 years.” Given the number of moving parts on the average tape machine, you’d be better off with a recorder that’s been used regularly and properly cared for.

Buying Tape
When thinking about a reel-to-reel unit, you should also consider what it takes to feed it. Until several years ago, Quantegy, which took over from Ampex in the mid’-‘80s, was pretty much the only remaining manufacturer of magnetic tape in the world. Quantegy has since ceased tape production, leaving a void that that has been filled by the likes of RMGI (whose tape formulations are available through dealers such as Splicit Reel Audio Products: http://www.splicit.com). Sealed reels of older Quantegy product (known as “new old stock,” or “NOS”) are still available from third-party sellers. These days, a new reel of �” x 1200’ tape costs anywhere from $15-$25, but can be used over and over again.

Is it wrong to buy older used tape? For the most part, yes - over time, the glue that is used to bind the two layers of the tape together can break down and cause the oxide layer to become gummy, and, in a worst-case scenario, leave a sticky mess all over your tape machine’s heads and guides. Therefore, always purchase sealed tape (even if it is NOS).

Basic Maintenance
Once you’ve purchased a tape machine, always keep the heads free of dirt, dust and tape residue. How much you record isn’t necessarily a determining factor for how much you should clean; even an hour or two of normal tape usage is enough to leave a noticeable amount of “tape shed” on your heads. After each session, gently swab the heads using Q-tips and either professional head cleaner or full-strength isopropyl alcohol (91% or higher; don’t even think about substituting rubbing alcohol). Apply the solution to the heads and metal parts only; use cleaner specially made for the machine’s rubber parts (including pinch roller). During long session breaks, let the slack come off the take-up reel to disengage the motor (saves wear & tear)

When seeking the cleanest sound possible, removing excess magnetic particles from the heads is the other part of the equation. For this job you’ll need a simple but handy tool: a demagnetizing wand, or “degausser.” This procedure only takes a few minutes (about once every 10 hours of operating time). The result of the cleaning and degaussing job should be immediately apparent; the signal should be much brighter and “clearer” upon playback.

If your machine didn’t come with an original owner’s manual/maintenance guide, consider getting one - many are available on eBay for as little as $10.

How a Tape Machine Works: Getting to Know Your New (Old) Recorder
During operation, the tape is sent from the left side or supply reel (or “source” reel) to the right-side or “take-up” reel by first passing under the left tension arm and then over the roller and the left-side guide post, then past the erase head, record head and playback head, then over the capstan (which controls the tape motion) and pinch roller, right-side guide post, and finally under the right-side tension arm (which usually doubles as a shut-off switch allowing you to turn the motor off during long periods of inactivity) and into the take-up reel. In rewind or fast-forward mode, the tape lifters keep the moving tape away from the heads to avoid excessive wear and to prevent the high-pitched sound of the moving tape signal from coming through the speakers. (Some tape machines are equipped with an “edit” function that adjusts the position of the lifters, making it possible to monitor the sound of the tape in transport.)

Getting started means learning the proper way to thread your tape-a skill that is not to be taken likely. After guiding the tape from the supply reel as directed above, wrap the front portion of the tape around the take-up reel, then slowly pull back on the tape while applying pressure with your index finger until only a small portion of the tape is visible. Turn the take-up reel counter-clockwise a few times until you have a few layers of tape, then gently pull back on the supply reel so that any slack on the take-up side disappears and the tape is good and snug.