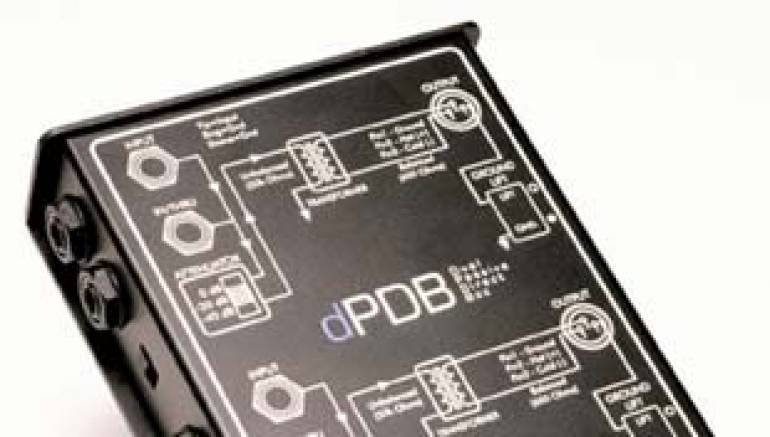 Maybe all your heroes made their best records after dark, but unless your studio space is genuinely soundproofed, you can be sure your neighbors will have something to say about your own nocturnal emissions. Solutions? Easy: Put away the mics—and get out the cords. Ambience aficionados may balk, but if you work until 7 and the neighbors put the kids to bed at 9, going direct may mean the difference between finishing your demos and leaving them in the can indefinitely.

Direct Boxes
The simplest approach, obviously, is to take one guitar or keyboard, one-inch instrument cable and patch right into your mixer. But unless you like the sound of totally stark-naked electric, you’ll need to do a bit more thinking. To help facilitate the process, start by going out and getting a decent direct-injection box. Originally conceived by Beatles engineer Ken Townsend back in the ‘60s, a DI box is used to balance and clean up the signal from a high-impendence sound source (such as a guitar or electronic keyboard) when going straight into a mixer. Passive DI boxes have no built-in amplification (and require no power as a result), but also do nothing to change the character of the instrument signal. An active DI box, on the other hand, comes with its own amplifier, meaning that you won’t have to do nearly as much tweaking at the mixer end. Active DI’s also cost more than passive DI’s.

Some of the most legendary distorted guitar sounds on record were achieved by running the signal through a DI box straight into a mic channel, then pegging the channel pre-amp. Try this on a solid-state home recorder, however, and you’re liable to create a nice little tuft of white smoke as you fry the channel circuitry (I speak from experience, having created my own little “smoking” track on a now-defunct Fostex multitracker). Unless you’ve got a tube console kicking around, you’d be better off using an intermediary device, such as a Tech 21 Sans Amp (preferably with on-board EQ), that will give you decent-sounding, pre-fader edge. You could also run your instrument through a garden-variety compressor-limiter pedal, though a rack limiter or plug-in is preferable. (For that matter, compression is recommended for almost any kind of direct-connect application.)

Of course, there’s more to life than just one balanced tone. For extra variety, companies like Digitech, Line 6 and Boss offer an array of modeling units and multi-effects processors to help you achieve classic-amp sound without classic-amp volume.

Bottom Feeding
Recording bass directly is considerably less challenging than working with DI guitar—in fact, many engineers prefer the sound of straight bass to that of a miked cabinet. Not that DI bass is a total cakewalk; like direct guitar, you should begin by putting a compressor between the instrument and the board, set at a medium release to keep distortion at bay and prevent the lowest frequencies from “flooding” the mix. Go easy; too much attack-release and you’ll more than likely be able to hear all of your starts and stops (especially if you play with a pick).

Drum Options
Using a click track or drum-machine foundation will suffice, but if it’s live skins you’re after—and if silence is mandatory—you could try a few other strategies. Pre-planning the percussion is a good one: Since almost everything else can be added later on, spend a few hours and record all of your live-drum parts ahead of time; once they’re tracked, you can take them anywhere (or you could do it in reverse by adding real drums over your click track once the other parts are finished). Why sample some robotic pre-set when you can sample yourself? With a little editing ingenuity, you can recycle an actual drum part from a previous track (be sure to pick something in the same time signature, of course). If you really want to go all out, consider one of Roland’s V-Series electronic drum kits that can be direct-patched to any multitracker for all of your clandestine percussion needs.

In Your Ear
With everything going straight in, your choice of headphones (and headphone-related equipment) is crucial. Standard open-air headphones will suffice (since you won’t be making any loud background noises), but closed-cup phones provide truer bass response and better overall sound reproduction.

Though opinions vary, monitoring your mixes using headphones isn’t always the best method. Because of the proximity to the eardrums, headphone mixes tend to be brighter; also, what sounds like great separation through headphones may turn out to be total mud when played back through conventional loudspeakers. If possible, save the final mixing for a more favorable environment with a pair of live monitors. If you insist on mixing with headphones, try using a model with diffuse-field capability (for more accurate EQ), or consider picking up an acoustic simulator (or better yet, a headphone virtualizer) to help alleviate spatial disorder.