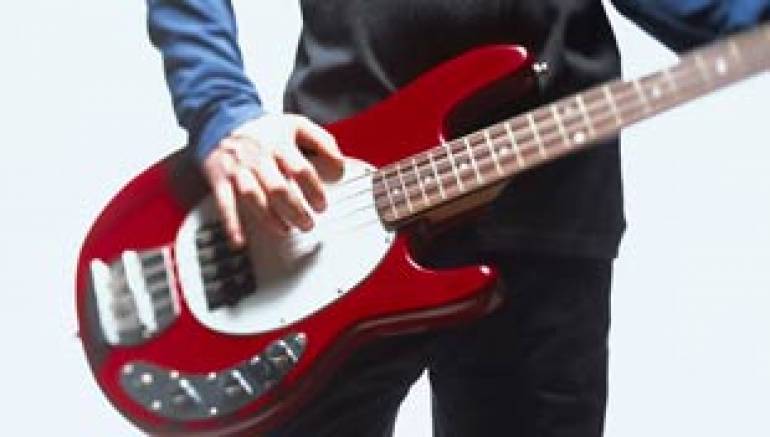 The second part of the formula for building a successful rhythm track is capturing the sound of a bass cabinet (or, in the case of a jazz group, an upright acoustic bass). In a recent column, we discussed the virtues of using a direct-injection (DI) box for tracking bass parts, which can help eliminate the problems commonly associated with acoustic recording. However, many bassists simply won’t accept anything less than live, miked bass - which, under the right conditions, offers better tone and warmth than its DI counterpart.

Not surprisingly, many of the techniques employed for bass-drum recording are easily transferable to bass-guitar recording as well. While inexpensive dynamic mics like the aforementioned SM-58 will do the job, once again, a mic with lower-frequency characteristics (such as the AKG D-112 or EV ND/868) will result in bass that sounds more like Barry White than Barry Gibb.

Mic Placement for Bass
Unlike traditional guitar-amp recording - which typically involves placing a dynamic mic right up against the grille cloth - it’s best to leave a little space between the mic and your bass amp, since bass sound waves don’t develop until they’ve traveled a bit. It’s not uncommon to position a bass mic as much as two feet from the source; try a few different positions and choose the one that works best for your particular set-up. Also, recording the bass in a room that generates warm, pleasing tones - instead of boom-y, aggravating reflections - is key. No matter what kind of room you’re using, one way you can help is to reduce the volume of the amp when recording.

Because bass leakage is next to impossible to regulate, bassists who don’t use a DI box often find themselves quarantined. However, not everyone thinks it’s necessary for bass to have its own space. “The bleed of the bass amp into the drums mics can add size, depth and warmth to the track,” says Matt Wallace, producer for Maroon 5 and Paul Westerberg and a noted lover of leakage. “The inherent delay between bass mike and drum mike picking up the same signal makes for a really tasty sound.”

Bottom Blending
Depending on the type of music you’re working on, mixing bass and drum tracks together can be a no-brainer, or may require a fair amount of listening, tinkering, pondering, and more tinkering. For instance, sometimes all that is required is for the kick drum to “push out” the bass notes, using only a modicum of EQ adjustments. However, if the music is more complex, or if bass and bass drum aren’t completely locked in, you may have to work a little harder to keep the two from battling each other. One popular remedy involves “squashing” the bottom-most part of the rhythm track using a compressor/limiter. “When I can’t quite get the resonance I want out of the bass drum,” notes producer/engineer/artist Todd Rundgren, “I just use compression, which increases the tail on the kick and makes it sound much more live and round.” Put the drums (and bass) up on the speakers, then add a schmeer of compression (set to 3:1 or 4:1), adjusting each track accordingly.

You can also remedy a “tubby” bass-drum sound by removing a portion of mid-range EQ while increasing the treble (to provide better articulation).

The Bottom Line
Remember, these are just basic guidelines; the beauty of home recording is that you can mix and match at will in order to create a sound that works best for you. The bottom line is that you don’t have to go overboard in order to get the makings of a beefy rhythm track. “All the great rock records that we love were made using no more than three or four mics between the drums and the bass combined,” notes Neill King. But as Matt Wallace observes, there is one thing you simply can’t do without. “Everything is of secondary importance when compared to the real source of good sound - which comes from an accomplished player with decent equipment playing with an intensity or focus that ultimately moves the listener,” says Wallace. “It’s just impossible to separate good sound from an outstanding performance.”