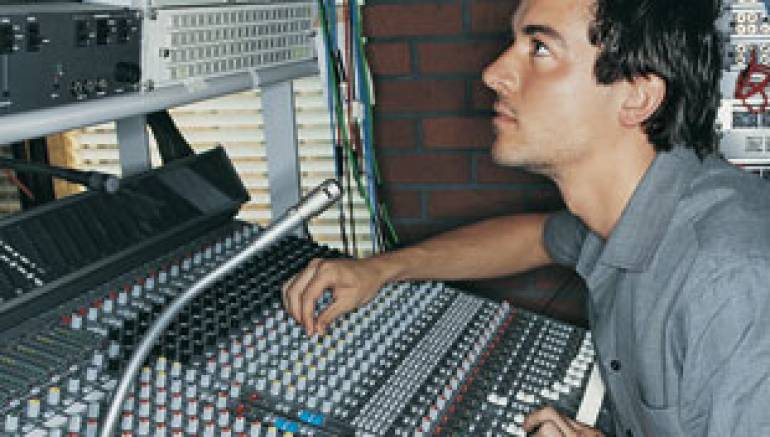 No one can deny the portability benefits of digital technology; today, 10 pounds worth of DAW gives you hours of recording capability without all the mucky-muck. But after a few consecutive nights of squinting at a puny LCD menu while twisting pan knobs the size of a peanut, you may find yourself longing for the kind of gear that was made for humans and not Lilliputians. Perhaps it’s time to think in terms of something a bit bigger - like a nice standalone mixing console.

There are a number of advantages to using a traditional mix console over a micro mixer, a DAW, or, for that matter, a computer-based “virtual” mixer (operated by a mouse and/or keyboard). Let’s start with the obvious: the layout of a large console. In the (very) old days, mixers used to have large rotary knobs, which worked fine but were unwieldy, and to solve the problem, engineers like Atlantic’s Tom Dowd devised long, sliding faders, which made it possible to “play” the mix like a piano. The longer the fader, the greater the ability to fine-tune the track levels. Rather than relying on a computer-based system of menus, a traditional mixer allows you to manually manipulate pan knobs for stereo placement, offers a full range of equalization options, and also gives you the option to route signals to any number of tracks without re-patching.

A mixer can be useful for a number of different recording applications. Select a mixing console that has either USB or FireWire capability for sending audio to a PC- or Mac-based recording system. If you’re starting from scratch, consider pairing a mixer with a standalone hard-disc recorder. Need some processing? Many mixers on the market today come with their own built-in effects cards, allowing you to flavor your tracks right from the board.

But the real bonus is the versatility that a good mixer provides. Want to mike up a small army of musicians all at once? While most basic digital machines let you record eight or more tracks simultaneously, when it comes to microphone inputs, many leave you in the lurch. On the other hand, any decent console will supply you with more microphone and instrument connectors than you’ll know what to do with. And unlike many of today’s miniscule units, a suitably spacious mix console doesn’t require that you have super-human optic nerves to make a basic mix.

Benefits of a Standalone Mixer
On a typical digital-audio workstation, the individual controls are responsible for a number of duties. For instance, a channel’s gain knob in record mode might double as a pan control in mix mode; hit the “shift” button, and the track-assign control suddenly becomes the effects-select control, and so forth. The ultimate manifestation of this digital multitasking is the multi-layered menu system, whereby users scroll through a series of windows in order to facilitate basic functions such as signal routing, mixdown, effects sends, editing and more. While sophisticated digital recorders let you keep multiple menus on the desktop using an attachable VGA monitor, if you’ve got a lower-priced DAW that uses a small LED screen, one puny screen at a time is all you get.

Which brings us to the first of many attributes of using a decent mixing console: it’s all there right in front of you. No multiple screens or multitasking scrolling knobs-what you see is what you get. Need to adjust the stereo placement of Track Four? Instead of going control-shift-menu-Track Four-panning-L-R, you take your left hand over to the Track Four channel strip and then you turn the pan knob. Done. Imagine that! All kidding aside, once you’re seated in front of a big, easy to manipulate mixing desk, you begin to see the beauty of having each and every function right at your fingertips.

Another great benefit of working on a conventional mixing desk is the vast assortment of inputs, outputs, effects sends and other patching functions. A 16-channel mixer lets you connect 16 microphones along with 16 line-level sources (though not simultaneously) and provides various other inputs as well. Each channel strip has a long-throw fader, three separate auxiliary controls (for effects sends and returns), 3-band EQ with swept midrange and swept low frequency (typical EQ layout for boards of this ilk), a fine-tune gain control, XLR connector, line-level connector and a passive in-out connector as well. Each channel has its own -20dB pad, an EQ cut switch (for using the console’s default setting), a channel mute switch (for adding or subtracting parts from the mix) and a soloing switch (for isolating individual signals).

Magic Buss
To help streamline the recording process, mixing consoles include a series of groups or “busses,” which serve as connecting points between the channel inputs and master outs that signals can be sent to during the recording project. Basic recording consoles typically come in groups of four eight, or 16. Obviously, the more busses on board, the more flexibility you’ll have while recording. Busses eliminate the muss and fuss of always re-patching your microphone connections. On each channel strip you’ll find a series of assign or “routing” buttons that correspond to the number of busses on your console; for instance, on an eight-group console, there are eight buttons for “sending” to the busses.

For instance, let’s say I began a session by recording an acoustic guitar part onto Track One. I’d plug my microphone into the Channel 1 input, punch up the No. 1 routing button on the channel strip (so that the signal is being sent to the No. 1 subgroup), hit “record,” and go. Now I want to cut a duplicate guitar part onto Channel 2. Do I need to rewire the mic into the Channel 2 input? Not at all - I’d leave the mic connection right where it is, only change the routing button from No. 1 to No. 2, then raise the record level on the corresponding subgroup. All level and EQ adjustments would remain the same - only the signal would now be sent to the No. 2 buss. As you can imagine, this arrangement is particularly helpful when recording multiple takes of the same passage to different tracks (such as lead guitars or double-tracked vocals).

Without a doubt, the most compelling reason for procuring a good mix console is the way it will enhance the sound of your recordings. Yes, your garden-variety digital workstation or computer-based system is certainly decent-sounding enough on its own, but once again, consider the corners the manufacturer has cut in order to give you all that functionality for under $500. It’s easy to dress up an electric-guitar part with some passable processing, but if you currently patch your vocals directly into a digital multitracker or computer soundcard, chances are the results are going to be less than superb. Run the same vocal track through the channel strip of a decent mixing board, however, and the difference is startling: suddenly, there’s a warmth and roundness that didn’t previously exist.

Console Shopping
While prices on mixers range from a few hundred bucks to several thousand, you don’t have to spend a fortune to get suitable sound. Behringer helped bring pro functionality into the basement with its line of Eurorack UB Series mixing consoles, an assortment of models ranging from the miniscule (UB502, one mono XLR input) to the mighty (UB2442FX-PRO, 24-4 with swept EQ, effects patches and other bells and whistles). The best part is the price: even the Cadillac of the Eurorack line, the UB2442, can be had nowadays for a mere $300. Others, such as Alesis and Yamaha, offer budget boards for both standalone and host-based systems, while mainstays like Mackie, Soundcraft and Tascam deliver professional extras such as automation, multi-band parametric EQ and upwards of 48 mixable channels.

If you’re thinking used, why not think big - as in big, spacious analog mixers, which are currently taking up way too much space in the back room of your local music retailer, or on Internet music sites. These beefy boards (often weighing in excess of 75 pounds) began falling out of favor during the digital downsizing of the ‘90s, and because of their heftiness, prices have dropped precipitously (many people don’t consider the extra mix space and nice long faders an attribute, but we know otherwise, don’t we?) Like tape machines, older mixing boards that once commanded four figures are now selling in the $300-$600 range, however, bargain-hunters can grab a decent console for as low as $200, in some instances. Particularly noteworthy are older British consoles like Studiomaster, Allen & Heath, and Soundcraft (the Brits wrote the book on board EQ, a tradition launched at the turn of the ‘70s by Rupert Neve and his masterfully constructed mixing desks). If you locate a console at a good price that happens to be “made in the UK,” you’re already ahead of the game.

Durability is a major attribute of older consoles; unlike today’s pint-sized workstations, a well-built analog mixing board cannot be killed by conventional methods. There were times when a sudden flare-up of static made me want to push my old ‘80s Studiomaster 16-8-2 console out the third-story window, except for the fact that I’d just have to carry it all the way back upstairs. The console box is comprised of a solid sheet metal enclosed within a nice wood-trimmed frame. The components are high quality and built to last, and should you need to make repairs, the faders, switches, circuits and other gadgetry can be easily accessed and individually removed.

So where does one find one of these colossal consoles? Trade papers, musicians’ ads and online auctions are brimming with potentially good deals; however, some of my most prized possessions have come from nearby music shops, particularly those with an affinity for arcane equipment. If the unit has been sitting around for a while you may have to spend some time fine-tuning, including removing all dust, dirt and other foreign substances from the contact points, before you can start tracking. However, if you do a good job, chances are you’ll be rewarded with many years of great-sounding mixes.