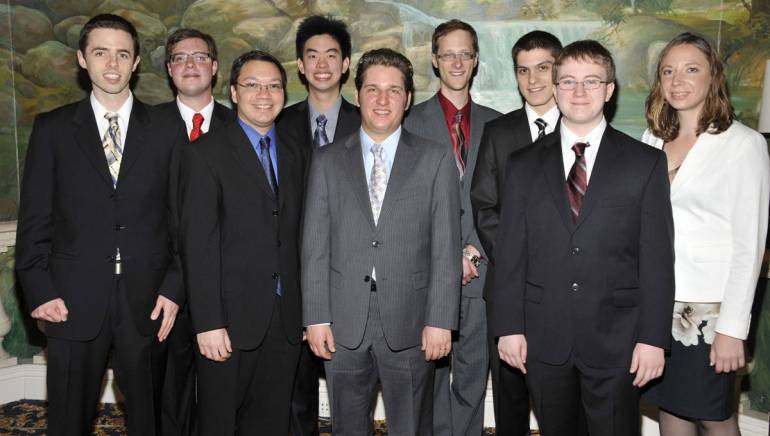 Nine young classical composers, ages 16 to 27, have been named winners in the 60th Annual BMI Student Composer Awards. Composer and Jury member Joseph Schwantner, BMI President and CEO Del Bryant and BMI Foundation President Ralph N. Jackson announced the decisions of the jury and presented the awards at a reception held May 11, 2012 at the Jumeirah Essex House Hotel in New York City.

The BMI Student Composer Awards recognize superior creative talent and winners receive scholarship grants to be applied toward their musical education. In 2012, more than 700 manuscripts were submitted to the competition from throughout the Western Hemisphere, and all works were judged under pseudonyms. Cash awards totaled $20,000. Andrew Hsu was the named the winner of the William Schuman Prize, which is awarded to the score judged “most outstanding” in the competition. This special prize is given each year in memory of the late William Schuman, who served for 40 years as Chairman, and then Chairman Emeritus, of the BMI Student Composer Awards. Additionally, the Carlos Surinach Prize, awarded each year to the youngest winner in the competition, went to Michael D. Parsons.

The distinguished jury members for the 2012 competition were Chester Biscardi, Tobias Picker, David Rakowski and Joseph Schwantner. The preliminary judges were Shafer Mahoney, David Schober, Sean Shepherd and Bernadette Speach. Ellen Taaffe Zwilich is the permanent Chair of the competition.

Ryan Chase was born in Port Jefferson, NY and currently lives in Bloomington, Indiana. He received a B.M. in composition from the Mannes College of Music in 2008, and a M.M. in composition in 2010 from Indiana University, where he is currently pursuing a D.M. in composition. He has studied composition with Claude Baker, Don Freund, Keith Fitch, Gabriela Ortíz, and David Tcimpidis. In 2012 Chase was named an ACO Underwood Readings Recipient and awarded an Aspen Music Festival Fellowship. Winner of the William Schuman Prize in the 2011 BMI Student Composer Awards, he has also received the first prizes from the National Association of Composers and the USA National Young Composers’ Competition, and the Albany Symphony Orchestra Composers to Center Stage Award during that same year. His works have been performed by the Albany Symphony Orchestra, the Indiana University New Music Ensemble, the Mexico City Woodwind Quintet, Contemporaneous, the Mannes Orchestra, Chelsea Symphony, and the Alaria Ensemble at Carnegie Hall’s Weill Recital Hall. Chase’s BMI award-winning work will be publicly read at the Underwood Readings by the American Composers Orchestra, conducted by George Manahan, on June 2 at the DiMenna Center in New York City.

BMI award-winning work: With A Greeting for SSAATTBB a cappella chorus

Joshua Fishbein was born in 1984 in Baltimore, Maryland and currently lives in Los Angeles. He received a B.F.A. in composition and a B.S. in psychology from Carnegie Mellon University, a M.M. in composition from the San Francisco Conservatory, and is currently working on a PhD in composition from the University of California at Los Angeles. He has studied composition with Paul Chihara, Ian Krouse, David Lefkowitz, Roger Bourland, David Conte, and Nancy Galbraith, among others. Fishbein has also studied piano with Jack Kurutz, Carol Prochazka, Lee Cooper and Gil Meerdter, and voice with Michael Mentzel. He was a winner in the 2012-2013 Hollywood Master Chorale “Voices of LA” Project, the 2011-2012 Guild of Temple Musicians Young Composers Award, the 2011 American Choral Directors Association Brock Memorial Student Competition, and many more. His works have been performed by Hollywood Master Chorale, California State University at Fullerton University Singers, WomenSing, the Princeton Singers, and the Carnegie Mellon Philharmonic, among others. His BMI award-winning work was premiered by The Esoterics in October, 2011 on their Washington state tour.

Andrew Hsu was born in Fremont, California in 1994 and currently resides in Philadelphia, where he is pursuing a B.M. at the Curtis Institute of Music. Hsu’s composition teachers include Richard Danielpour, David Ludwig, and Pamela Layman Quist. An active chamber musician at Curtis and venues such as the Kennedy Center, he has studied piano with Gary Graffman, Eleanor Sokoloff, Meng-Chieh Liu, Erna Gulabyan, Hans Boepple and Jed Galant, and percussion with Tomasz Kowalczyk. He is the recipient of many important and prestigious prizes including first prize in the Music Institute of Chicago’s Generation Next Young Composers’ Competition for his Sonic Fragments for solo piano, and first prize and audience prize in the Robert Avalon Young Composers’ Competition for his Piano Trio. Hsu’s works have been performed by the Curtis Symphony Orchestra, Robert Avalon Ensemble, and others.

BMI award-winning work: The Miracle of the Walking Fish for baritone and guitar

Laura M. Kramer was born in Minersville, Pennsylvania and currently resides in Los Angeles. She received a B.M. in saxophone performance from the West Chester University of Pennsylvania in 2006, a M.M. in composition from Indiana University in 2008, and is currently working on a D.M.A. in composition at the University of Southern California. She has studied composition with Don Crockett, Frank Ticheli, Brian Shepard, Claude Baker, Don Freund, Jeffrey Hass, Michael Gandolfi, Robert Maggio, Mark Rimple, and Larry Nelson, and saxophone with James Rötter and Greg Riley. She has been awarded the Carolyn Alchin Endowed Music Scholarship, the Charles S. and Margherita Gangemi Memorial Scholarship, the Swope Foundation Scholarship, and many more. She was a guest presenter at the West Chester and Mansfield Universities of Pennsylvania in March, 2011. Kramer’s works have been performed by such ensembles as the Quintessential Winds, USC Contemporary Music Ensemble, and IU Contemporary Vocal Ensemble, and commissions have come from Duo Montagnard and tubist David Holben. Her BMI award-winning work was premiered at USC in September, 2011 and was performed again in May, 2012 in Los Angeles.

Philippe Macnab-Séguin was born in 1992 in Montreal, Quebec, where he is now enrolled at Vanier College. He is also currently studying composition privately at McGill Conservatory with Félix Baril and taking group composition lessons with Glen Ethier and Christopher Smith at Vanier. He has studied jazz guitar with Nick Di Tomaso and Eric Ostiguy. Macnab-Séguin was primarily self-taught by writing progressive metal songs for his band, reading theory textbooks and listening to a very wide variety of music in high school. His band, Peak of the Pendulum, was a semi-finalist in the Quebec TV show, Can Your School Rock.

Michael Parsons was born in 1996 and currently lives in Stirling, New Jersey, where he attends the Watchung Hills Regional High School. He also studies at the Juilliard School, Pre-College Division and at Making Score, New York Youth Symphony’s program for young composers. He has previously attended the Boston University Tanglewood Institute Young Artists Composition Program and the Cali School of Music. His composition teachers include Ira Taxin, John Kaefer, Michael Ippolito, Kyle Blaha, Martin Amlin, Justin Casinghino, Anna Clyne, and Patrick Burns, and he has studied piano with Ron Levy, and Jerry Sheitelman. Additionally he plays guitar, saxophone, and drumset. He has been named an “Emerging Composer” in both the 2011 and 2012 Tribeca New Music Young Composer Competition and received 2nd place in the 2011 Pikes Peak Young Composer Competition. His The Plain of Six Glaciers was premiered in 2010 by the New York Philharmonic, Alan Gilbert conducting, and other works have been performed by the Juilliard Pre-College Piano Forum, the Second Avenue Dance Company, and at the New York Chamber Music Festival. His BMI award-winning work has been read by both the Juilliard Pre-College Orchestra and the Juilliard Pre-College Symphony.

Daniel Temkin was born in 1986 in Houston, Texas. He has received a B.M. in percussion from Mason Gross School of the Arts at Rutgers University, a M.M. in composition from the New England Conservatory, and is currently pursuing a Artist’s Diploma in composition from the Curtis Institute of Music. His composition teachers include Jennifer Higdon, Michael Gandolfi, Charles Fussell, Kevin Puts, Robert Aldridge, and Sydney Hodkinson. Temkin has studied percussion with She-e Wu and Chris Deviney. Temkin’s honors include the 2010 Earshot Readings with Nashville Symphony, the 2010 Buffalo Philharmonic Composers Forum, the 2010 NEC Honors Ensemble Composition Prize, among many more. His works have been performed by such groups as the Nashville Symphony, Rutgers Symphony Orchestra, Buffalo Philharmonic, Curtis Symphony Orchestra, Lyra Society for Harp, PRISM Saxophone Quartet, the Rutgers University Choir, and pianist Qing Jiang, among others. Temkin’s BMI award-winning work was premiered at the Melos Music 2nd Annual Concert with members of Nonsemble 6 in San Francisco in August, 2011 and performed again in April, 2012 at the Field Concert Hall in Philadelphia.

Roger Zare was born in 1985 in Sarasota, Florida and currently resides in Ann Arbor, Michigan. He received a B.M. from the University of Southern California, a M.M. from the Peabody Conservatory, and is now pursuing a D.M.A. at the University of Michigan. His teachers include Kristin Kuster, Bright Sheng, Paul Schoenfield, Michael Daugherty, Derek Bermel, David Smooke, Christopher Theofanidis, Morten Lauridsen, Fredrick Lesemann, Tamar Diesendruck, and Donald Crockett. A previous BMI Student Composer Award-winner in 2007 and 2009, Zare will serve as the 2012 Composer in Residence at the Salt Bay Chamber Music Festival . Other honors include the Charles Ives Scholarship from the American Academy of Arts and Letters in 2010, the 2012 Symphony in C Young Composers Competition, the New York Youth Symphony First Music Commission, and the American Composers Orchestra Underwood Commission in 2008. Zare’s works have been performed by the American Composers Orchestra, Cabrillo Festival Orchestra, Omaha Symphony, Ars Nova Dallas, FiveOne New Music Ensemble, Belvedere Chamber Music Festival, and many others. His BMI award-winning work was premiered by clarinetist Alexander Fiterstein and the California State University at Northridge Wind Ensemble in August, 2011and repeated at the International Clarinet Association’s ClarinetFest 2011 in Los Angeles.