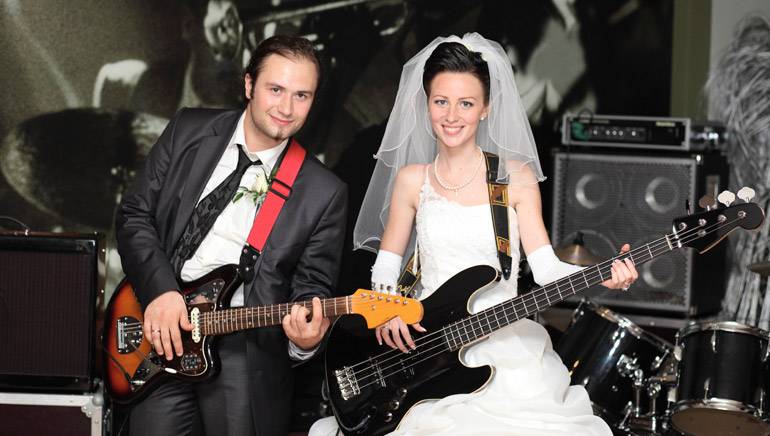 Dearly beloved, we are gathered here today to join together this music with this lyric in holy matrimony …

As it relates to songwriting, the marriage of words and music is referred to as prosody. When prosody is effectively employed, a song’s music and lyrics present a united front that clarifies and enhances the emotions its writers hoped to convey. Several tools can be employed to bring together a song’s various elements so that they work in sync to impart the feeling the writers intended to evoke.

The simplest way to achieve a sense of prosody is to be sure your song’s words and music convey the same emotion— for example, pairing happy words, such as “Loving you puts a smile on my heart” with music that feels happy. Similarly, gloomy phrases, such as, “I can’t bear to face another day without you,” are typically teamed with music that evokes a sense of sadness. But what makes a piece of music sound happy or sad?

A melody can be harmonized in an infinite number of ways. Depending on the choice of chords, bass notes, and other accompaniments, the same melody can evoke a wide variety of emotions. Minor chords, and in some instances, diminished chords, typically help to telegraph a sense of melancholy in a song, while major chords tend to have the opposite effect.

While there are no rules in songwriting—only tools—a funeral dirge or a blues song will almost certainly be built around a progression that includes minor chords, while most happy songs will have a predominance of major chords. It’s interesting to note that the inclusion of a minor chord (Cm7) four times in the chorus of Pharrell’s “Happy” does not make the melody sound sad.

Only by trying a variety of chords with our melodies can we assess how each variation affects the emotion being expressed. Choose those chords that best amplify the feeling you want your melody to evoke.

Chords are not the only element that encourage listeners to feel a specific way. Your choice of notes—and the way those notes interact with your chords—play a crucial role in determining the emotion your music conveys.

Few songs sound more mournful than Hank Williams’ country classic “I’m So Lonesome I Could Cry.” Yet, surprisingly, that song includes no minor chords. In Williams’ song, the sense of sadness in the melody is induced by the choice of notes, and how those notes interact with the major chords.

Another factor that contributes to “I’m So Lonesome I Could Cry” feeling forlorn is the “shape” of the melodic lines. Listen to the song and you’ll notice that the end of every melodic phrase descends to finish on a low note. In fact, the last note of each line is the lowest note in that four-bar phrase.

If the notes of Williams’ classic song were charted on a graph it would show that every line has a shape that curves downward and ends lowers than where it began. This same technique can be observed on many of the lines in Bill Withers’ “Ain’t No Sunshine.” While this is certainly not the only way to express sadness in a melody, it can be an effective tool and is found in many successful sad songs.

Choose Notes That Are Consistent With Your Lyric’s Meaning

Another way to achieve consistency between words and music is to examine the meaning of the words and pair them with notes and intervals that magnify their meaning. For example, words such as “rise,” “fly”, “soar,” and “high” are typically matched with high notes. Similarly, low notes are likely to accompany words such as “low,” “bottom,” and “bass.” A perfect example of this technique can be found in Garth Brooks’ mega-hit “Friends in Low Places” (written by Dewayne Blackwell and Earl Bud Lee). The note that accompanies the word “low” is indeed a low note; in fact, it is the lowest note in the song.

For example, in Adele’s “Rolling in the Deep,” when she sings “We could have had it all,” the note that accompanies the word “all” is the highest note of that musical phrase and it is held out longer than the notes that surround it. It would have sounded silly if that big, emotion-evoking note had been assigned to the word “the” or “it.”

Allowing the Music to “Write” the Words (and Vice Versa)

When I teach prosody in my songwriting workshops I sometimes play the eight-bar instrumental intro of the song “Back to Your Heart,” which I wrote with Gary Baker and Kevin Richardson and was included on the Backstreet Boys’ Millennium album. I ask my students to tell me what they believe the lyric of the song will be about, based solely on the musical introduction. They consistently respond with answers such as, “It’s about longing and heartache,” “yearning,” “melancholy,” and “missing someone.” These are indeed the themes the lyric expresses. In this instance, the musical intro came first and evoked such clear emotion that it essentially dictated what the accompanying lyric should say.

Using Rhythms and Phrasing to Help Convey Your Message

Rhythms and phrasing—specifically, the use of long, versus short notes—and how those notes relate to each other— powerfully impact your music’s message. For example, long, held-out legato notes combined with a sparse lyric convey a very different feel from rapid-fire, hip-hop-influenced melodies.

Taylor Swift’s #1 hit “We Are Never Ever Getting Back Together” that she wrote with Max Martin and Shellback is an excellent example of how the phrasing of the vocal melody can contribute to a song’s message. The rhythm that Swift sings in the verses makes her delivery believable and relatable to her audience. The syncopated rhythms in the chorus melody help underscore the emphatic message that we are indeed NEVER getting back together.

By exploring various rhythms within our vocal melodies we can find those rhythms that best enhance the emotion we’re hoping to deliver.

In preparation for this article I asked my Facebook friends, most of whom are songwriters, to share examples of songs that do not incorporate prosody. It was interesting to note the extent to which there is a subjective aspect to whether a melody is “happy” or “sad.”

But some songs do indeed seem to have happy melodies that accompany sad lyrics. Don Gibson’s country classic “Oh Lonesome Me” pairs a lyric that tells a story of heartbreak with an upbeat, peppy melody. The lack of prosody did not stop Gibson’s recording from sitting at the #1 spot on the Billboard charts for eight weeks. Decades later the Kentucky Headhunters took the same song to the top-10, and Johnny Cash’s version went to #13.

There are many additional examples of songs with music and lyrics that don’t seem to go together. It’s interesting to note that in most of these instances sad lyrics are matched with happy melodies. There are few successful instances of mournful melodies accompanying happy lyrics.

In some cases, pairing a happy melody with sad words is done to invoke a sense of sarcasm or irony. But in many instances, this doesn’t seem to be intended. It’s possible that these songs work despite the disparity because many listeners prefer upbeat, feel-good melodies, and don’t always pay close attention to the lyric. It’s also possible that some listeners find sad lyrics to be more palatable when accompanied by an upbeat melody. Regardless of the reason, there are notable examples of songs that do not incorporate prosody—however, most successful songs do indeed incorporate this tool.

Record an instrumental version of your melody, or a version that replaces the lyric with a nonsense syllable such as “ahh,” “ohh,” or “ooh.” Listen back to your recording and ask yourself to identify the feeling the music evokes. If you’re unsure, ask a friend. If your music and your lyric are not expressing the same mood and emotion—and that was not your intent—it is probably time for a rewrite.

Ideally, we want all the elements of a song to work together to collectively deliver one clear emotion to our listeners. Multiple elements contribute to the feeling a song evokes. These include tempo, musical arrangement, vocal delivery, chords, note choices, and the phrasing and rhythm within the vocal melody. By being conscious of these aspects we can create songs that connect with our listeners—and elicit the emotions we intended.

Jason Blume is the author of This Business of Songwriting and 6 Steps to Songwriting Success (Billboard Books). His songs are on three Grammy-nominated albums and have sold more than 50,000,000 copies. One of only a few writers to ever have singles on the pop, country, and R&B charts, all at the same time— his songs have been recorded by artists including Britney Spears, the Backstreet Boys, the Gipsy Kings, Jesse McCartney, and country stars including Collin Raye (6 cuts), the Oak Ridge Boys, Steve Azar, and John Berry (“Change My Mind,” a top 5 single that earned a BMI “Million-Aire” Award for garnering more than one million airplays). Jason’s song “Can’t Take Back the Bullet” is on Hey Violet’s new EP that debuted in the top-10 in twenty-two countries and reached #1 throughout Scandinavia and Asia. He’s had three top-10 singles in the past two years and a “Gold” record in Europe by Dutch star, BYentl, including a #1 on the Dutch R&B iTunes chart.