Posted in MusicWorld on September 12, 2019 by Jason Blume 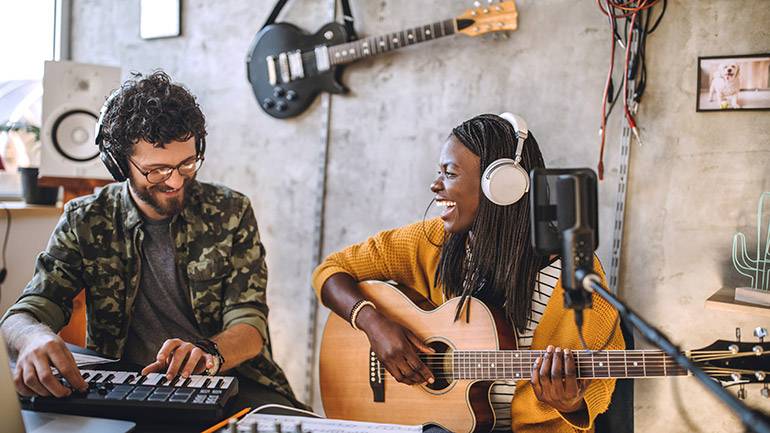 Not every great song is the result of collaboration, but a look at recent hits by artists such as Taylor Swift, Ed Sheeran, Keith Urban, Imagine Dragons, Luis Fonsi, P!nk, Adam Levine, Kenny Chesney and Ludacris reveals that the overwhelming majority of today’s hits are co-written. In fact, at the time this article was written, every #1 song on Billboard’s Hot 100, Hot Country, Hot Rock, Hot Latin Songs, Hit R&B/Hip-Hop, Hot Christian Songs, and Smooth Jazz Songs charts credited multiple writers.

In previous articles (“3 Tips for Successful Co-Writing”; “The Good, the Bad, and the Hits That Come From Collaboration”; and “How To Prepare For a Co-Writing Session”), I addressed some of the specific actions we can take to contribute to successful collaborations. For example:

Now that you’ve got the nuts and bolts, let’s look at some additional ways to be a great collaborator—someone others are eager to write with.

Get to Know Your Co-Writer

It is not unusual for publishers to set up appointments for their writers to collaborate with writers and artists. The writers, who might have never previously met, are expected to meet at a designated time and write a hit. Some writers are comfortable with this way of writing, but others need more of an emotional connection before they can effectively create music that feels authentic with a stranger.

To make the writing process feel less mechanical, it can be a good idea to take some time to get to know your collaborator. Some writers like to go out to a meal or have coffee so they can chat before plunging in. Bringing a favorite snack to share can do wonders to break down walls and encourage communication during breaks in the writing session.

Are you in love? Going through a breakup? Dealing with the loss of a loved one? By sharing some of the things going on in your life you might find some common ground with your collaborator—and that can lead to a heartfelt song.

Leave Egos at the Door

When writing with someone who has more experience or more impressive credits than you, it is easy to feel intimidated. Don’t pre-judge a co-writer based on their credits. I have written some of my favorite songs with writers who have not yet had commercial success. I have also written songs that are “good”—but not “wow”—with GRAMMY-winners and superstars.

Go in as equals and remember that you are in that room because you have a unique talent and something valuable to contribute. Do your best to work through the fear of sharing and being open.

Be a Good Listener

To write—or co-write—songs that evoke powerful feelings in our audiences, we need to access and express our feelings. We also need to be good listeners.

I recall BC Jean sharing the story (at the Hawaii Songwriting Festival) of how she came to write “If I Were a Boy” (recorded by BC Jean, Beyoncé, and Reba McEntire, written by BC Jean and Toby Gad). Jean shared that she and Gad were at a pizzeria when she commented that if she were a boy, she would be able to eat pizza without having to worry about her figure. This led her to ponder what else she might do if she were a boy. She shared that she would treat a woman better than the way she had been treated by the man who had recently broken her heart. These emotions were raw and real, and she estimates the lyrics and melody poured out of her in 15 minutes. Being a good listener, and recognizing the power of the concept, Gad captured the ideas on a recorder, and the result was a critically acclaimed international hit.

Do your best to be sure your collaborator feels heard and that his or her contributions are valued. I have written with more than a hundred different writers and have only had one truly negative experience. I presented my strongest idea, and my co-writer proceeded to take the wheel and act as if I were not even in the room. In the few instances when I was able to squeeze in a thought, it was shut down. I left the session with a song that neither moved me nor reflected my vision for this very special idea.

Remember that you are collaborating in the hopes that the song you create together will be something neither of you would have written alone. The goal when co-writing is to create something special that is born out of the alchemy that results from blending your talents and perspectives with those of one or more other writers. This can only occur if you keep an open mind, don’t criticize, and create an atmosphere in which creativity is safe to flow. Even if you don’t like a suggestion—or the direction the song is headed—be willing to explore it before shooting it down. And remember that songwriters are sensitive creatures, so be tactful and gentle when stating that your collaborators’ contributions are not working for you.

Honor your gifts and abilities by honing them and sharpening your skills. This includes keeping abreast of current trends and anticipating what might be next, giving yourself every advantage.

Jeremy Bircher co-wrote “Taste the Feeling,” (written by Bircher with Joshua Jones and Scott Fritz; recorded by Avicii and Conrad Sewell) the soundtrack for Coca-Cola’s global anthem, including the 2016 Summer Olympics and EUFA Euro ad campaigns. Bircher shared what might be the best advice for bringing your very best to a co-writing session. “Like an athlete,” he said, “stay at your peak mentally, psychologically, and physically, with good nutrition, sleep, meditation, and exercise.”

I’ve heard it said that songwriting skills notwithstanding, the most important elements needed to be successful collaborators are a personality that others are drawn to; a nonjudgmental demeanor that invites open expression; and the ability to recognize what is working—and what isn’t.

Not every pairing of writers will result in the elusive chemistry we hope for, nor will every collaboration yield a hit song. But some of them will, and by using the tips in this article you can become a collaborator that writers and artists look forward to working with.