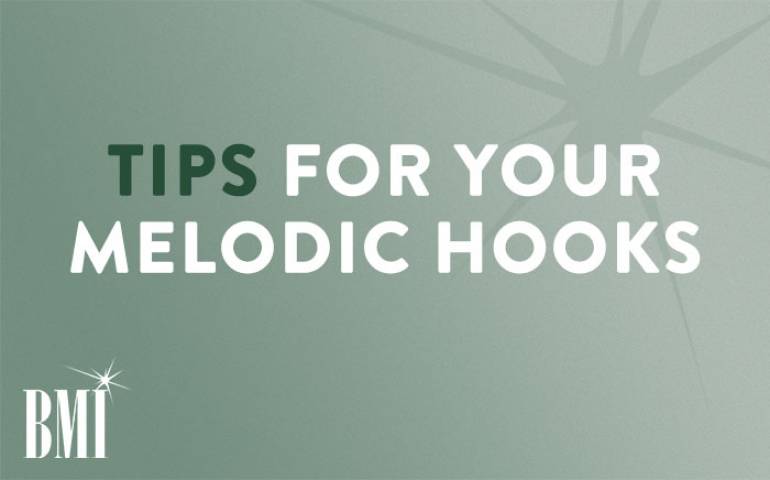 Melodic hooks can be the heartbeat of a song. These tasty bits of ear candy can make the difference between an “almost” – and a life-changing hit. They can be instrumental or sung and can occur in any section of a song – the intro, verse, chorus, pre-chorus, post-chorus, bridge, or outro. Catchy musical phrases hook in your listeners and keep them on the proverbial line. They can occur in multiple sections of a given song (i.e., a verse, a pre-chorus, and chorus) and although it is not typical, there can be more than one musical and/or vocal hook per section. But they are most frequently found in choruses and post-choruses.

Ideally, unforgettable hooks pop into our heads–or pour out of our keyboards or guitars–spontaneously. But when they don’t, we can apply craft to create these extra-memorable melodic moments and add additional hooks to maximize our songs’ chances for success.

Let’s look at five ways to embellish our melodies and help them burn into listeners’ brains.

A stutter in a song occurs when melody is crafted so that part of a word—typically the first syllable—is repeated one or more times by the vocalist. A perfect example of a song with a st-st-st-stutter is Carrie Underwood’s smash hit, “Undo It” (written by Underwood with Kara DioGuardi, Marti Fredericksen, and Luke Laird). The title is sung “Uh-Uh-Uh-Uh-Uh-Uh-Uh-Undo It,” turning the stutter into the primary hook in the chorus. For another example, listen to Elton John’s “Bennie and the Jets” (written by Sir Elton John and Bernie Taupin). It’s hard to imagine that #1 song without its signature stutter, the “Buh-Buh-Buh” that precedes the name “Bennie.”

Write a melody that includes a unique, instantly memorable rhythm in the vocal melody of a given section of your song (i.e., verse, chorus …). Then repeat this rhythm multiple times within the same part of the song. In order to accomplish this, each line that has the same rhythm needs to have the same—or approximately the same—number of syllables in the lyric that accompanies it.

This technique resulted in a powerhouse hook in GRAMMY winning Best Rock Song, “When I’m Gone” (recorded by 3 Doors Down and written by band members Brad Arnold, Todd Harrell, Matt Roberts, and Chris Henderson). Note how the last note of each line of the chorus is emphasized, and that every line of the chorus melody repeats almost the same rhythm, creating a melody that delivered it to the top of Billboard’s Top 40 Mainstream and Hot Mainstream Rock charts.

To hear another great example of the power of this technique, listen to the quirky rhythms in the melodic phrases that repeat in the verses of Old Dominion’s “No Such Thing as a Broken Heart” (written by Jesse Frasure, BMI’s reigning Country Songwriter of the Year, with Matthew Ramsey, Trevor Rosen, and Brad Tursi). Also note the musical phrase that repeats in the choruses.

Include a “Nonsense Syllable”

A post-chorus can be defined as a part of a song that occurs after the chorus, providing an additional hook that typically includes vocals. It introduces melody that is not heard in the chorus or elsewhere in the song, and in many instances, it has few lyrics that have not previously been heard in the song. It often reiterates the title and incorporates nonsense syllables.

Examples of strong post-choruses include Keith Urban’s “Wasted Time” (written by Urban with James Abrahart and William Wells). For more information about post-chorus references, check out “The Power of Post-Choruses.”

Include a Catchy Instrumental Lick

A musical motif, sometimes referred to as a signature lick, is a melodic phrase that is typically introduced in a song’s intro and recurs throughout the song. Some songs, such as Vanessa Carlton’s “Thousand Miles” have multiple instrumental phrases that serve as hooks. Carlton’s #1 hit includes a motif that is played on piano during the intro and in the verses, as well as the instrumental hook played by the strings in the second half of the verses.

One of my favorite instrumental hooks is the guitar lick that introduces Rascal Flatts’ recording of “What Hurts the Most” (written by Jeffrey Steele and Steve Robson). This version of the song reached #1 on Billboard’s Hot Country Songs and Adult Contemporary charts and received a Country Song of the Year GRAMMY nomination. The same lick can be heard (with slight variations) played on a synthesizer in Cascada’s pop/dance recording of the same song.

At a recent songwriting workshop, I led my students through an exercise during which they applied each of these techniques to one of their songs. They explored including a stutter, repeating hooky rhythms, adding nonsense syllables, writing a post-chorus, and incorporating a catchy musical lick.

One unforgettable hook can be your song’s ticket to the top of the charts. But why stop at one, when multiple hooks can maximize your chances of success?

Try these tools in your own songs. Not every song will be benefit from each of these techniques; the decision needs to be made on a song-by-song basis. But you won’t know whether one or more of these melodic tools might take your song to the next level unless you try.