Posted in MusicWorld on October 23, 2021 by Jason Blume 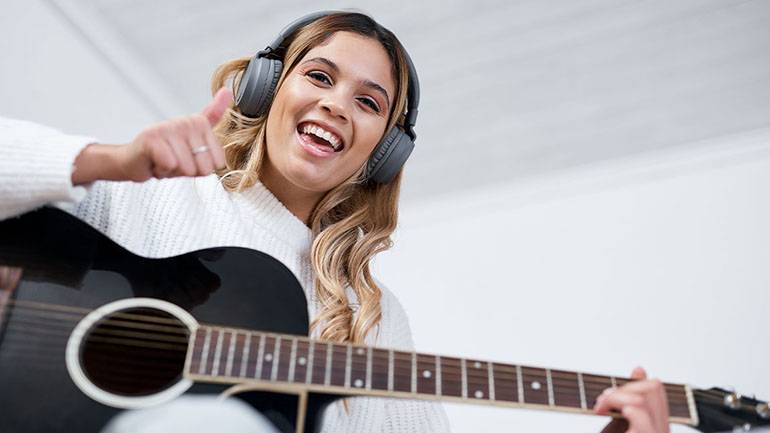 When I find an exceptional song at one of the workshops that I teach online, I forward it to up to ten publishers, depending on the song’s genre. I emphasize to prospective students that to maintain my credibility, I must be extremely selective about the songs that I forward. Perfectly crafted, good songs will not be forwarded. The publishers have specified they want only songs that are different and better than what their staff-writers can deliver—while still sounding like current number one hits. I tell the attendees the primary reason to attend this event is not to get your song forwarded to publishers; this happens for fewer than 10% of those who attend. Their goal should be to learn how to write the strongest songs possible and to learn what is working—and what can be stronger—in their own song and those played by the other attendees.

That said, at a recent workshop a student played a song that checked off all the boxes and more. I sent it to a publisher for whom I thought it would be a perfect fit. Thirty minutes later I received a response: “I love this song!” The writer (who had never previously published a song) along with his co-writer have now signed a contract with this publisher who has secured placements with a long list of superstars. Let’s take a look at what the writers of this song did—and what we can do—to rise above the competition.

1. Start With a Fresh Lyric Angle

By a fresh angle, I mean a new take—a novel way to approach a topic to which millions can relate. I don’t want to give away the title or concept, but the song the publisher signed was a song about being in love—not an uncommon topic. But the writers approached it in a manner I have never heard before. They found a new way of saying “we’re in love” that was refreshingly original.

When I critique songs, one of the biggest lyric pitfalls I encounter is hitting the nail too squarely on the head—building on a title that states exactly what the singer is feeling instead of coming at it from a fresh perspective. Love is the most common topic in lyrics, because so many listeners relate to some aspect of it: celebrating love, wishing for love, missing someone they love, wishing they had a different love, being heartbroken, and more. So, building on a fresh angle is especially important when writing love songs.

Check out some of these titles and concepts that launched artists’ careers or propelled them to a next level. Taylor Swift’s debut single “Tim McGraw” (written by Taylor Swift and Liz Rose) was a new way to say, “I hope you’ll remember me.” The lyric for Khalid’s first hit, “Location” (written by Khalid, Alfredo Gonzalez, Olatunji Ige, Samuel Jimenez, Bajram Kurti, Joshua Scruggs, and Christopher McClenny) is built on a novel way of saying, “I want to be with you.” In Blake Shelton’s first #1 single, “Austin” (written by David Kent and Kirsti Manna-Warner) the lyric of the exceptionally clever chorus is an outgoing answering machine message.

For me, having a unique lyric angle is so important, I won’t write a song if I don’t have an idea I believe is strong enough to make an artist bump his or her own song. I can’t rely on spontaneously generating those ideas during writing sessions, so I collect them in a folder. Being an optimist, I title that collection of titles and concepts, “Future Hits.”

2. Include Unique Imagery and Detail

“Show—don’t tell” is a basic tenet of effective lyric writing. Instead of stating how a singer feels, we can “show” a scene unfolding by incorporating “pictures”—images listeners can see in their minds. Ascribing details to those images makes them more compelling. For example, instead of writing, “she drove an old truck,” I might write, “she drove a jacked-up ’05 Tacoma the same sky blue as her eyes.”

Listen to the exceptional use of imagery and detail in the lyrics of “I Drive Your Truck” (written by Jimmy Yeary, Connie Harrington, and Jessi Alexander) and “God’s Country” (written by Devin Dawson, Hardy and Jordan Schmidt; recorded by Blake Shelton). Imagery and details are mainstays of current country music lyrics. But a listen to the following pop, R & B, and Christian music hits shows how effective it can be to add these elements to lyrics in all styles. Check out Ariana Grande’s Record of the Year GRAMMY nominee, “7 Rings” (written by Michael Foster, Kimberly Anne Krysiuk, Tayla Parx, Charles Anderson, Thomas Brown, Oscar Hammerstein II, Richard Rogers, Victoria McCants, Njomza Vitia, and Ariana Grande), H.E.R.’s “I Can’t Breathe” written by Dernst Emile, Tiara Thomas, and H.E.R), and Little Big Town’s “Beat Up Bible” (written by Shane Stevens, Hillary Lindsey and Cary Barlowe).

Place your lyrics under a proverbial microscope. If you find predictable lines and clichés replace them with less expected images—lyrics no one else would have thought of. For example, instead of saying “we drank cheap red wine,” you might write, “we sipped strawberry sangria” or “a shot of Patrón in a can of Coke.” Instead of kissing “in the back of daddy’s Chevy,” you might place your characters on a ferris wheel, on the front row of a Lady Gaga concert, or at the top of the Eiffel Tower. When exploring unique lyric images remember to be sure they sound natural and conversational.

Remember, listeners won’t choose your song over the competition unless you give them compelling reasons to do so—and including detailed, original imagery can help get you a “Yes.”

Regardless of how awesome your lyrics might be, to rise above the competition they need to be delivered on the wings of melodies that instantly sear into listeners’ brains. The best ways to ensure your melodies are unforgettable are to infuse them with melodic and rhythmic repetition and include rhythms in the vocal melody that are fresh and hooky.

“I personally feel most people, artists included, are first attracted by the melody. Then you have to sell them with the lyrics. When you can put a catchy melody with the right lyrics and the artist hears it at the right time…then they say, I have to cut this song!” —Tim Hunze, VP BIG MACHINE Music Publishing

For a terrific example of a melody that incorporates catchy rhythms and repetition listen to the verses of “One Too Many” written by Daniel Davidsen, Mich Hansen, Peter Wallevik, James Norton, and Cleo Tighe; recorded by Keith Urban featuring Pink!).

The writers of the workshop song that was recently signed used repetition and gave the vocalist memorable rhythms to sing. They also included a “magic” moment, which can be an unexpected “wow” note, chord, or rhythm. In this instance, the magic occurred one musical bar prior to the end of the chorus and was comprised of a high note that demanded attention without pulling the listener from the flow of the melody.

A classic example of a “magic” melodic moment can be heard in the low note that accompanies the word “low” in “I’ve Got Friends in Low Places” (written by Dewayne Blackwell and Earl Bud Lee; recorded by Garth Brooks). It’s hard to imagine that iconic song being successful without the inclusion of that special note.

If the melody that initially emerges is less than stellar, rewrite it. Look for motifs and rhythmic phrases that can be repeated and see if there is a place to insert a “magic” note.

4. Be Open to Feedback and Rewriting

It’s easy to overlook issues in our own songs. We know what we intended our lyrics to mean, and after hearing our melodies numerous times, they become memorable to us. Sometimes we can only see where we missed the target by having a skilled professional point out the weaknesses.

The first of my songs to be published and recorded was rewritten seven times before it received a stamp of approval from the publisher who suggested the revisions. That song charted on the Billboard charts and opened the door to all my subsequent successes. I don’t know if my career would have progressed if I had declined to revise the song or if I had stopped after the third or fourth rewrite.

I suggested a minor lyric revision for the song I forwarded and the writers agreed that the revised lyric was stronger. The publisher who signed the song also requested a lyric rewrite, which the writers obliged. I recommend doing your best to satisfy requests for revisions—as long as they do not sacrifice the integrity of the song. If you don’t like the new version, you have the option of reverting to the original.

In my more than twenty-five years of teaching workshops I have yet to encounter a songwriter who claims they write songs because they love the process of marketing their work. To the contrary, I often hear writers express their wish that they could just write songs and not have to deal with approaching publishers and pursuing other means of placing their music. But this is the music business and those songwriters and recording artists who embrace the business—and treat it as such—have the best chances of success.

Taking care of business can include putting yourself in places where you have opportunities to play your songs for industry pros who might advance your career. These include online songwriting workshops, song camps and retreats, and conferences. At these events you are likely to expand your network of potential collaborators. You can also avail yourself of the services of legitimate organizations that provide networking and educational opportunities as well as chances to pitch your songs.

Taking care of business includes presenting a strong demo—a recording that demo-nstrates your song’s potential. The amount of instrumentation needed to show a song’s potential depends on the genre. For example, a tender country ballad might be perfectly conveyed with a guitar and a strong vocal, while an up-tempo pop, R&B, or dance song is likely to need a more elaborately produced recording to approximate your vision for the song. I urge my students not to invest significant time or money until they have gotten one or more critiques from trusted professionals.

Students from my workshops have placed songs in films and on TV. They have signed single song and exclusive publishing deals. Their work has been recorded by superstars and has resulted in #1 singles and GRAMMY nominations. So, I know that while songwriting success is not easy to attain, it is possible.

Build your songs on the foundation of a strong, fresh concept; infuse your lyrics with unique imagery and detail; write unique, memorable melodies; be open to constructive feedback and rewriting; and take care of business. These steps can maximize your chances of getting a “Yes!”

Jason Blume is the author of 6 Steps to Songwriting Success, This Business of Songwriting, and Inside Songwriting (Billboard Books). His songs are on Grammy-nominated albums and have sold more than 50,000,000 copies. He has been a guest lecturer at the Liverpool Institute for Performing Arts (co-founded by Sir Paul McCartney) and at the Berklee School of Music, and has been interviewed as a songwriting expert for CNN, NPR, the BBC and the New York Times. For information about his workshops and webinars, and to read additional articles and more, visit www.jasonblume.com.