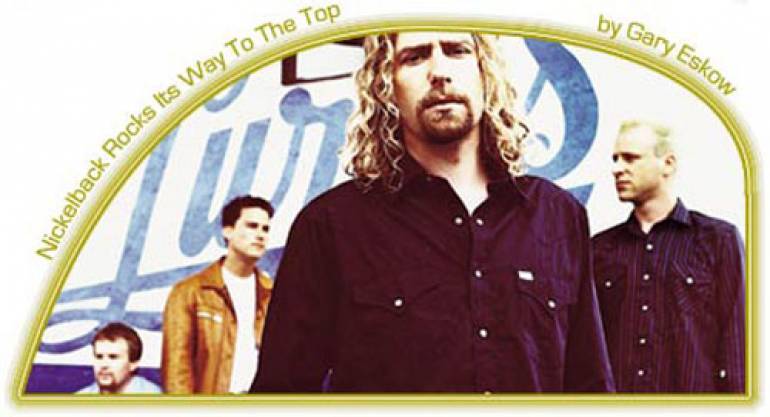 "I really want to make music for the right reasons," says Nickelback frontman Chad Kroeger. "The most important reason is to make music because you love it. And I think that's why we spend so much time on it."

Nickelback's devotion to their craft inspired the title of the band's hard-hitting new album, For All the Right Reasons. Fueled by Kroeger's raspy vocals and melodic songs, the disc entered the Billboard Hot 200 Albums charts at #1 and spawned the hit singles "Photograph" and "Savin' Me." Within months of its release, Reasons was certified double platinum.

Apparently, the band's stickler proclivities have struck a chord with millions of fans across the globe. Nickelback's albums, including The State, Silver Side Up and The Long Road, have sold nearly 15 million copies in the U.S. alone, yielding such hits as "Leader of Men," "Never Again," "Someday," "Figured You Out" and "Feelin' Way Too Damn Good." The band's breakout hit, "How You Remind Me," was the number one Most Played Song of 2002.

Having set stratospherically high standards for themselves, Kroeger and his bandmates — guitarist Ryan Peake, bassist Mike Kroeger and drummer Daniel Adair — paid meticulous attention to detail while recording Reasons. From its painstakingly tweaked verses, to its oft-altered choruses and arrangements, the album is the result of careful consideration. "We're perfectionists," Kroeger confesses.

It's this sort of scrupulousness that has helped make Nickelback one of the most revered hard-rock bands of the day. In fact, All The Right Reasons features guest performances by some of the most revered names in the genre, including ZZ Top guitarist Billy Gibbons and late Pantera axeman Dimebag Darrell Abbott. Gibbons added Texas flavor to the tracks "Follow You Home" and "Rock Star," while Abbott's searing guitar improvisations on "Side of a Bullet" were added posthumously.

The latter tune sprang to life after Dimebag was shot and killed onstage in 2004. Kroeger honored his fallen friend by composing and recording "Side of a Bullet," then seeking the blessing of his brother, Vinnie Abbott.

"I called him up and played the track for him over the phone," Kroeger says. "He said, 'I'd love to have you do a song about my brother.' Vinnie then sent some guitar outtakes and we pieced together a solo and put it on the song. The result is a new Dimebag Darrell solo."

Like its platinum predecessors, All the Right Reasons was born of emotional revelation and a genuine passion for music. The band was slated for a long vacation following the completion of 2004's The Long Road jaunt, but Kroeger and company were so inspired, they began planning the new album just days after returning to their Canadian home.

"On this record, we didn't want to overlook any small detail," Kroeger says. "If you finish a song and it's not stuck in your head, then how will it stick in someone else's head when they've only heard it once or twice?"