Posted in News on November 7, 2005
BMI joins the music publishing community in mourning the loss of Beebe Bourne, who died on November 1 after a battle with cancer. 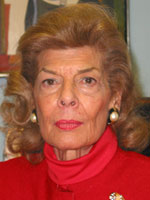 Bourne was part of the legendary Bourne music publishing family, and through the Bourne Co., controlled the publishing of such American classics as "Unforgettable," "Me And My Shadow," "When You Wish Upon a Star," "Swinging On a Star" and "Black Magic Woman." She also owned and operated the prestigious serious music catalog, International Music Co., one of the most important publishers of classical music in the world.

In addition to serving on the board of the National Music Publishers Association (NMPA) and on its international and legislative committees, Bourne served as President of the Music Publishers Association, Executive Director of the New York Chapter of the Association of Independent Music Publishers (AIMP), and was a member of the Copyright Society of the U.S.A. In 2002, she received the Women in Music Touchstone Award given for distinguished service to the music industry, and just this past spring was awarded the 2005 Abe Olman Publisher Award from the Songwriters Hall of Fame. She was only the second woman to receive the honor; the first was her mother, Bonnie Bourne.

Bourne Company Music Publishing was founded in 1919 by Bourne's father, Saul Bourne, with Irving Berlin and Max Winslow. Before taking over the reins of the company from her mother in 1991, she held such diverse positions as President and COO of THinc Consulting Group, CEO of Seversky Electronatom, Special Assistant to the President of the United States, and Executive Assistant to the Administrator of the Small Business Administration.