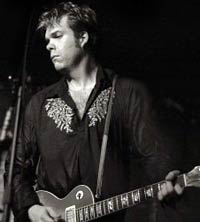 BMI singer/songwriter Norah Jones will headline a benefit concert for ailing guitarist and friend Jason Crigler, who suffered a brain aneurysm last year. The line-up will feature Jones and her Handsome Band, along with fellow New York musicians and friends Dennis Brennan, Amy Correia and Rachel Loshak at Irving Plaza on Tuesday, January 25 at 7:30pm. Tickets are $60 and are available at the Irving Plaza box office or online at CC.com. All proceeds will go directly to Jason and his family.

One of the most sought after musicians in New York City, Jason is one of the founding members of Goats in Trees and has played alongside renowned artists such as Linda Thompson, John Cale, Marshall Crenshaw, Teddy Thompson, Juliana Nash and Edison Woods, among many others. His first solo CD, Down Like Hail, recorded before his illness was discovered last summer, features Paul Bryan (Aimee Mann, Graham Parker, Sleepy LaBeef) on bass and Dan Rieser (Jesse Harris, Norah Jones, Marcy Playground) on drums. This is the second benefit concert for Jason; the first was held in October at the Living Room and raised over $15,000.

Here's what Norah Jones has to say about her good friend Jason Crigler: "Everyone who has ever had the pleasure of playing with Jason will know how special he can make it feel and sound, and what a magical cast he helps to create within all the music he plays.

"Jason's upward musical path was interrupted last August 4th, when a bleeding in his brain was discovered. Jason has been in the hospital since then, and has endured many ups and downs in his recovery. Jason is in rehab now, after spending several months in the intensive care, and is starting to heal and regain his strength.

"This concert is an effort to show support for Jason, and help him and his family deal with the huge financial hurdles they are facing now, and those still to come in the future, while Jason is on his road to recovery. As friends and musicians who have worked with Jason, it is a chance to give back with our music, a little of what he has given to us from his heart."