Posted in MusicWorld on December 1, 2004 by Julia Rubiner 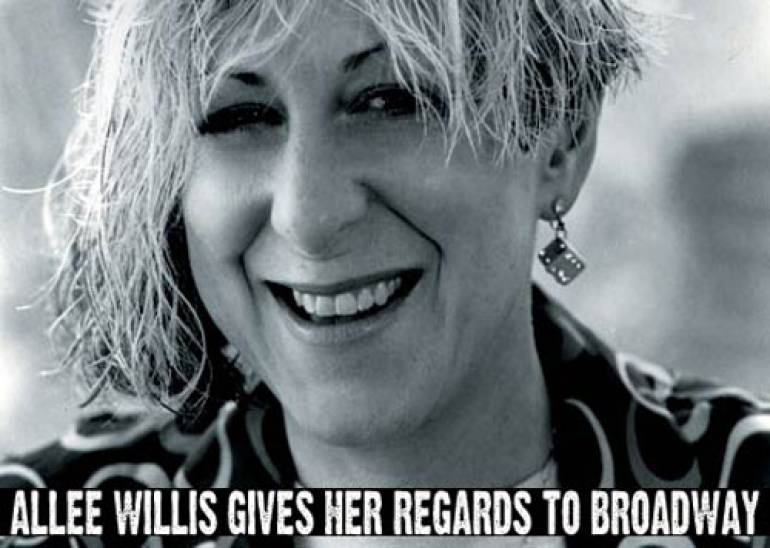 Allee Willis is a bona fide renaissance woman: not only a Grammy Award-winning songwriter who can boast more than 50,000,000 records sold — her catalogue includes “I’ll Be There For You” (the “Friends” theme), The Pointer Sisters’ “Neutron Dance,” Earth, Wind & Fire’s “September” and “Boogie Wonderland,” and The Pet Shop Boys/Dusty Springfield’s “What Have I Done To Deserve This?” — but also a painter, animation auteur, creator of daring digital destinations, impresario of events, and, now, a Broadway composer and lyricist.

“Broadway is the last place I ever thought I’d find myself. It seemed like such an archaic form. I’m shocked to discover it’s the most spontaneous medium I’ve ever worked in; it’s live all the time so you could always be on the brink of disaster,” she says gleefully.

Willis is riffing on the musical incarnation of The Color Purple , based on the Pulitzer Prize-winning book by Alice Walker (1983) and Oscar-nominated film by Steven Spielberg (1985), which she’s co-authoring with songwriters Brenda Russell and Stephen Bray, and Pulitzer Prize/Tony Award-winning book writer Marsha Norman.

Willis declares: “I’ve probably worked with 1,000 people, and this is the best collaboration I’ve ever been involved in.” She was initially the art director on the production but soon chose to join forces with Russell and Bray — with whom she was scoring two animated series she’d co-created, “Fat Girl” (Oxygen Network) and “Driving While Black” (urbanentertainment.com) — to write spec songs that would compete with the work of seven other creative teams.

The first was “Shug Avery Coming To Town,” which became the cornerstone of The Color Purple. “With the animation, we made sure each character had a particular rhythm and pace and style,” Willis explains. “For the show, we chose to musicalize a multi-character scene because we knew we could apply this and it would capture a variety of sounds and moods. It has Celie and Mr. in it, but also the townspeople, the church ladies — everyone has an opinion about Shug Avery coming to town.

“Once we nailed that song, the entire show started developing that way,” she continues. “Since we became involved so early, the show really formed around the music. I think that’s why, bar for bar, it’s one of the most hook-filled musicals ever written.”

She says of her collaborative method: “It’s been like family therapy! It’s a complete democracy. If two of us are passionate about a part, it stays. And we don’t do anything until we turn on the machines; we’re in recording mode from the second we start writing. That way we capture the lightning bolts, rather than refining the song so completely that we squeeze all the juice out of it. Then, as soon as something sounds good — whether it’s a beginning, ending, lyric, melody, string part — we start developing it. When we run out of ideas, we jump to another section, and eventually, it all comes together in a very organic way.”

Willis had not written a song since 1994 (the “Friends” theme). Her thrill in rediscovering the craft is palpable. “Someone recently put my album, Childstar , which was released in 1974, on CD for me,” she says. “It’s the first 10 songs I ever wrote and I hadn’t heard it since it came out. Unbelievably, what I’m writing today bears a striking resemblance to my earliest work. It’s because I’ve been left alone — with Brenda and Stephen — to do whatever I want. Working this way, you can indulge your every fantasy. No place is too extreme. If you feel it, you go there.”

The Color Purple premieres at Atlanta’s Alliance Theatre in September. It will make its Broadway debut in 2005.