Posted in News on April 20, 2003
Brian Holland, Lamont Dozier and Edward Holland, the legendary songwriting trio and principal creators of the early Motown sound, will be honored as the 2003 BMI ICON recipients, it was announced today. They will receive their awards at the 51st annual BMI Pop Awards dinner on May 13 at the Regent Beverly Wilshire Hotel in Beverly Hills. BMI President & CEO Frances W. Preston will present the honor at the black-tie affair. 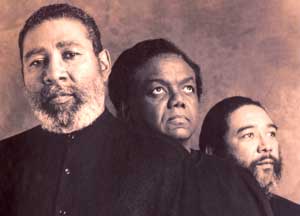 The BMI ICON award is given to songwriters who have been unique and indelible influences on generations of music makers. First awarded last year, the initial honorees were Bill Anderson, Chuck Berry, James Brown, Bo Diddley and Little Richard. As part of the Pop Awards ceremony, a musical salute will be performed for Holland-Dozier-Holland.

Brian Holland, Lamont Dozier and Eddie Holland are revered as the architects of the 'Sound of Young America' or 'Motown Sound.' Having created the songs that turned a fledgling Detroit record company into an industry groundbreaker and powerhouse, the trio wrote "You Can't Hurry Love," "Reach Out I'll Be There," "How Sweet It Is To Be Loved By You," "You Keep Me Hanging On," "Stop! In The Name of Love" and many more. Such artists as Diana Ross & The Supremes, Marvin Gaye, the Four Tops, the Isley Brothers, Kim Weston, and Martha Reeves & the Vandellas recorded their songs while the three were at Motown, with artists such as Rod Stewart, James Taylor, Charlotte Church and the Dixie Chicks covering their songs today. Their catalog, represented for performing rights by BMI, adds up to nearly 100 million radio and television airplays.

Longtime BMI songwriters, Brian Holland affiliated with the performing rights organization in 1960, followed by Lamont Dozier in 1961 and Eddie Holland in 1963. They were inducted to the Songwriters Hall of Fame in 1988 and the Rock and Roll Hall of Fame in 1990, and received the National Association of Recording Arts and Sciences (NARAS) Trustees Award in 1998. They have won countless BMI Awards in the past, including BMI Pop Awards and Million-Air citations.

The annual BMI Pop Awards is an invitation-only event that recognizes the most performed songs of the past year. Preston, along with Barbara Cane, Vice President & General Manager, Writer/Publisher Relations, Los Angeles, will present BMI Citations of Achievement to the writers and publishers of the 50 top songs.