Posted in MusicWorld on October 25, 2013 by Ted Drozdowski 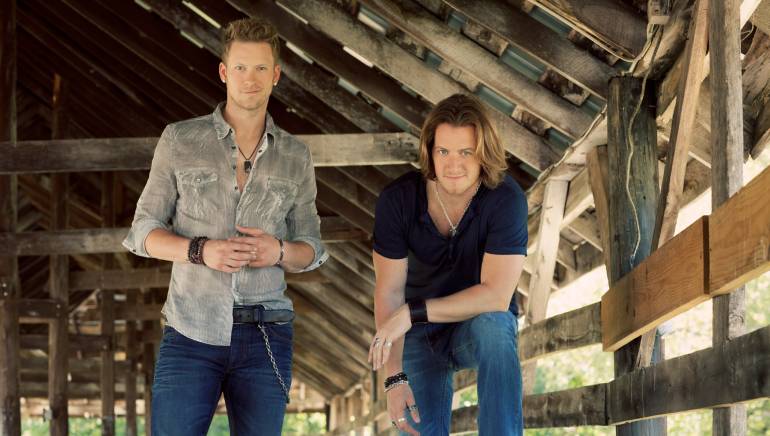 All that’s been propelled by their powerhouse debut full-length album, Here’s to the Good Times, with three singles — “Cruise,” “Get Your Shine On” and “Round Here” — that reached number one on the country charts and remained there for multiple weeks, a feat not accomplished by a debut album since Brooks & Dunn’s Brand New Man in 1991. And Florida Georgia Line just launched a fourth single, “Stay,” that seems destined for a similar climb.

Since Florida Georgia Line’s appearance on the CMA Festival’s BMI stage in June 2012, Hubbard and Kelley have gone from touring roadhouses in a van to opening for Taylor Swift’s Red tour to headlining amphitheaters. BMI caught up with the duo by phone at a tour stop in South Dakota to discuss the blend of hard work, DIY smarts, luck, mentoring and vision that have all been part of their stratospheric ascent.

1. What impact did playing BMI’s stage at CMA Fest have on your career?
KELLEY: When I think that was just 18 months ago, I’m blown away. BMI gave us such a great opportunity. They’ve always been good to us from pretty much day one — getting us meetings with publishers and giving us advice. But playing on that stage was pivotal: it was right outside of the main stage at LP Field and put us in front of a lot of people, and a lot of record labels came to see us. The fans were going crazy. And that’s where Scott Borchetta from Big Machine Records saw us for the first time.

2. What’s your songwriting process like?
KELLEY: Both of us do everything when it comes to writing and performing and singing. There’s no equation. We get in the back of the bus and get our guitars out and a computer and feel our way through songs.

HUBBARD: Busy as we are, we try to squeeze writing in when we can. We’re both very hands-on for melodies, hooks and lyrics, which is why I think our partnership works, to say nothing of our getting to write with some of the best heads in country music as well.

3. How do you know a song is right for you to record?
KELLEY: It’s gotta be fresh. It’s gotta say something in a way that’s never been said. The melodies have gotta be right. You gotta be able to relate to it. If we feel like there’s nothing we would change… like the first time we heard “Here’s to the Good Times.” The songs that are gonna change your life are the kind of songs we’re gonna cut.

4. Now you’re writing in the back of a bus. Did you go through a period of touring low budget? ?
HUBBARD: We roughed it for quite a few years in B.K.’s Tahoe and my trailer. The van was a step up, and then we bought a Mercedes Sprinter. And then it was the bus. This time last year we were in the van. Now we’ve got three buses and three semi’s. So it’s definitely been a wild ride.

KELLEY: I think it’s still sinking in. There was a period when it was kind of a blur. It was music videos, this ‘n’ that. On a tour bus, things start to get a little slower and you get some rest. But in our Tahoe, we were having the time of our lives, and we still are.

5. Tell me the story of your first hit “Cruise” — how it developed and what the song means to you both?
KELLEY: That was kind of a “process” song. It started in the living room one day in Nashville. In the middle of writing another song, I threw out the first line of the chorus: “Baby, you a song/You make me want to roll down my windows and cruise.” We took it into the studio real quick, changed a few things and edited it down a little. Our producer, Joey Moi, was working with us to tighten things up. He pushed and pushed and pushed and got it to where it is now — an amazing track that doesn’t sound like anything else on the radio. The cool thing about “Cruise” is we wrote it when we didn’t even have a publishing deal, so we’ve seen this song grow and become special to us and our fans.

6. How did your first two EPs contribute to your development and how did you begin working with your producer, Joey Moi?
HUBBARD: We got a publishing deal at Big Loud Shirt and Joey is a writer at Big Loud Shirt, too. We’d heard his stuff, and we were just blown away that he wanted to work with us. We started recording and had a natural connection. We love Joey, what he does and we love working with him.

Both EPs helped us grow, for different reasons. Our first EP was just something B.K. and I put together, and every step of the way was a learning and growing process, from trying to learn how to sing in the studio to write new songs and figure out the artwork. It was a great learning experience. For the second one we had already teamed up with Joey.

KELLEY: Now recording new music is so much easier because we’ve learned so much and developed so much, and Joey’s been a big part of that.

HUBBARD: When I was having trouble singing a line or hitting that note, he would tell me to smile when I was singing, and it would just come out. He’s also real big on symmetry, laying back on the beat and placing the emphasis where it needs to be. If there are two lines that go, “I feel you in my heart/And I felt that from the start” — then “heart” and “start” have to be sung the exact same way. It’s all about symmetry. Vocals are something that’s not rushed for us and Joey.

7. What’s your favorite venue and why?
KELLEY: The Meadowbook Amphitheater in Guilford, New Hampshire. It’s just like being at camp except the food is good. They’ve got all sorts of stuff to do, like basketball, fire pits… and it’s on a lake. It’s feels like you’re at home. And it’s a big outdoor amphitheater that fits 15,000 to 20,000 people. We’ve played there twice and can’t wait to get back.

8. Why did you join BMI and what role has BMI played in your career?
KELLEY: We both felt BMI, for country songwriters and artists, is the best fit in Nashville. They know what’s going on in Nashville and on the road. They gave us tools to get better… getting us into writers’ rooms, networking… They gave us the encouragement or constructive criticism that we needed. We joined BMI before we were signed to management.

10. What advice do you have for songwriters starting out?
HUBBARD: Be yourself, try to find your own sound, and if you’re trying to write what’s on the radio, you’re already two steps behind.

KELLEY: Really challenge yourself to find your own sound. If you’re trying to write better than Craig Wiseman, you’re going to lose every time because he’s Craig Wiseman. We just try to write like Florida Georgia Line. And it’s working for us. Be unique, chase your dream, play big and play loud.