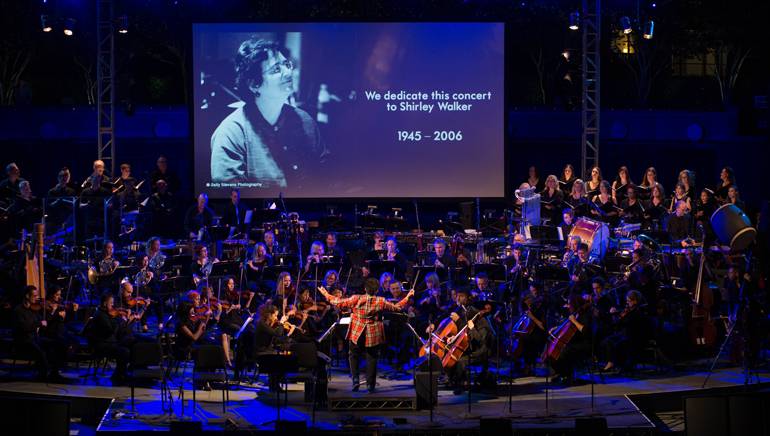 All of the composers whose music was featured during “The Women Who Score: Soundtracks Live” concert dedicated their performances to the late Shirley Walker, the Emmy-winning composer who pioneered the advancement of women film composers. Photo: Gino Mifsud

The Alliance for Women Film Composers, in association with The Film Music Society and White Bear Public Relations, featured more than 20 female composers, many of whom BMI proudly claims as members, at “The Women Who Score: Soundtracks Live” concert on Friday, August 19, as part of Downtown Los Angeles’ Grand Performances series.

The packed event, which was co-sponsored by BMI, included six themed sections: The Protectors, The Seekers, The Heroes, The Icons, The Rebels, and The Dreamers, which were each introduced by leading female entertainment executives or artists, including Dawn Hudson, CEO of the Academy of Motion Picture Arts & Sciences.

Among the BMI composers who conducted their own works with the mesmerizing 55-piece orchestra and 30-person choir were: Nan Schwartz (In the Heat of the Night), Lolita Ritmanis (Marvel’s Avengers Assemble), Starr Parodi (G.I. Joe: Renegades), Penka Kouneva, (Prince of Persia: The Forgotten Sands) and founder and president of the Alliance for Women Film Composers, Laura Karpman (Underground). GRAMMY-winning BMI composer Nora Kroll-Rosenbaum (Stockholm, Pennsylvania) was exhilarating to watch as she conducted the impressive works of Academy Award-winning BMI composer Rachel Portman (Emma, The Cider House Rules), and Miriam Cutler (Ethel), while BMI composers Heather McIntosh (Compliance), Lili Haydn (Place Between Places) and Kathryn Bostic (Middle of Nowhere) also performed their own works.

The free evening, which took place at the Water Court Stage at California Plaza, certainly put several cracks in the glass ceiling for the future of women composers who have made tremendous strides in the male-dominated genre. All of the composers whose music was featured dedicated their performances to the late Emmy-winning composer Shirley Walker, who pioneered the advancement of women in film music. Bravo, ladies, bravo!