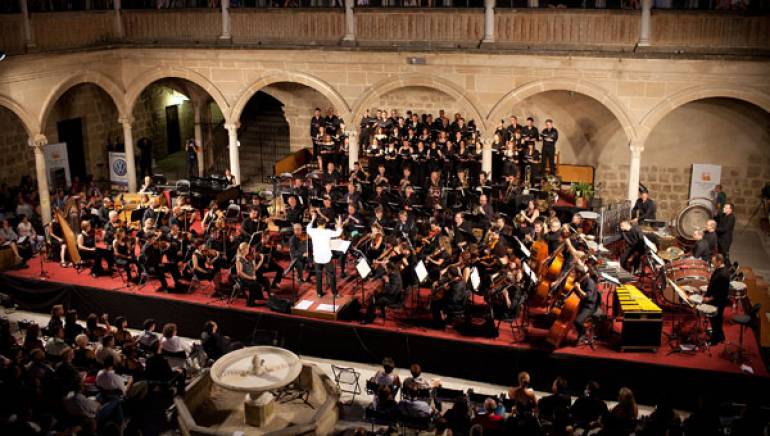 The Malaga orchestra and choir created a lush wall of sound during performances at the International Úbeda Film Music Festival. Photo: Julio Rodriguez

“The guys who run this festival all do other things normally—they are bank executives, lawyers, accountants, engineers, etc.,” says Doreen Ringer Ross, BMI Vice President, Film/TV Music.  “They take their vacation time and volunteer to work this event because they love the music.”

Fans drawn to the event enjoyed awe-inspiring displays of virtuosity as they rubbed elbows with fellow aficionados. “They attract hundreds of other like-spirited film music fans from all over the world to come and share in this,” Ringer Ross says of event organizers. “The composers signed autographs for over four hours!”

In addition to live performances and workshops, the festival included the presentation of Jerry Goldsmith Awards and Goldspirits Awards. Goldspirits winners included BMI composers Alexandre Desplat (SACEM), named Best European Composer; Christopher Young, whose Creation was named Best European Original Soundtrack (OST) and Best Dramatic OST, while hisDrag Me to Hell earned best Terror/Thriller OST; and Alan Silvestri, whose enduring Back to the Future was named Best Edition/Reedition of a Past Original Soundtrack.

“This festival is unique in that it spawned from love,” says Ringer Ross, “love of film composers and their music.  When composers go to Úbeda, they can feel this.”