Posted in MusicWorld on September 9, 2010 by Kevin Zimmerman 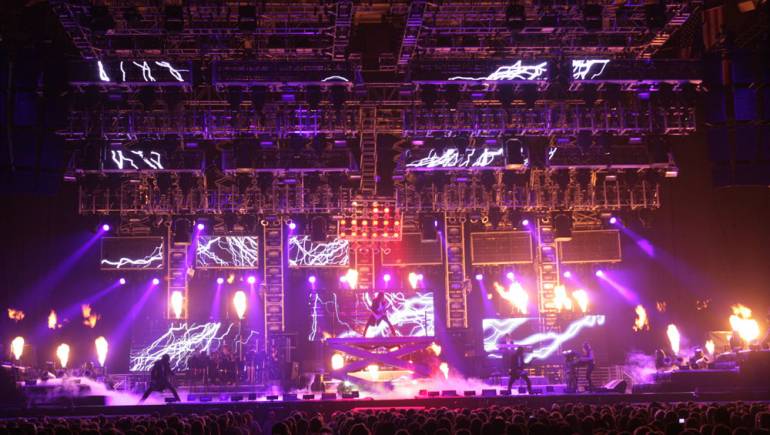 24 singers and a host of musicians dazzlingly complemented by live pyrotechnics is an event. Releasing just one concept album and watching it effortlessly go multi-platinum is serendipitous. But for one group, these benchmarks are far from frozen moments in time: they’re the everyday. For Trans-Siberian Orchestra, the exceptional is the expected, and topping their most recent feat is actually the group’s career-defining M.O.

“We started out being massive,” says TSO mastermind Paul O’Neill, the composer/lyricist/producer/writer whose vision it was to combine the inherent theatricality of a Jesus Christ Superstar, the light show of a Pink Floyd, and the proggy rock crunch of mid-period Who. “We’ve never been an opening act, and we’ve never had an opening act.”

Through three concept albums about Christmas, a meditation on Beethoven (2000’s Beethoven’s Last Night), and last year’s Night Castle (a double-CD about changing one’s life for the better), TSO has successfully mixed rock and classical elements (Castle includes references to Verdi, Grieg, Mozart, Bach, and a stunning version of Orff’s “Carmina Burana”) on is way to total sales of over 7.5 million.

Using so many musicians and vocalists allows a continuous “cross-pollination of ideas, and since no one singer has to perform more than five songs a night, they stay fresh,” O’Neill maintains. “There’s no other act out there where you can find an R&B guitarist next to a classically-trained pianist and a vocalist who starred in Les Mis on Broadway. That’s what makes us so unique.”

It’s the group’s live shows, however, that have become truly legendary, employing pyrotechnic and laser effects synchronized to the music. “It’s like launching the Pacific Fleet,” O’Neill laughs. “Over the years we’ve kept increasing in size, with the idea that if someone’s going to sit through a three-hour show, we need to keep throwing things at them.”

That dedication has paid off as well: TSO has played to over seven million people and grossed over $250 million since its first tour in 1999. Its latest tour, launching in November, promises to be even grander.

Even with the uncertain economy, O’Neill refuses to skimp on effects – and tries to keep tickets at around $25. The group also donates $1 from every ticket sold to a local charity; to date, it’s donated over $7 million to philanthropic causes.

“The band of course floats on the finances of the world,” he says. “But we serve the fans, first and foremost. For many of them, this may be the only big show they can afford for the year, so it’s up to us to deliver the goods while keeping it affordable.”