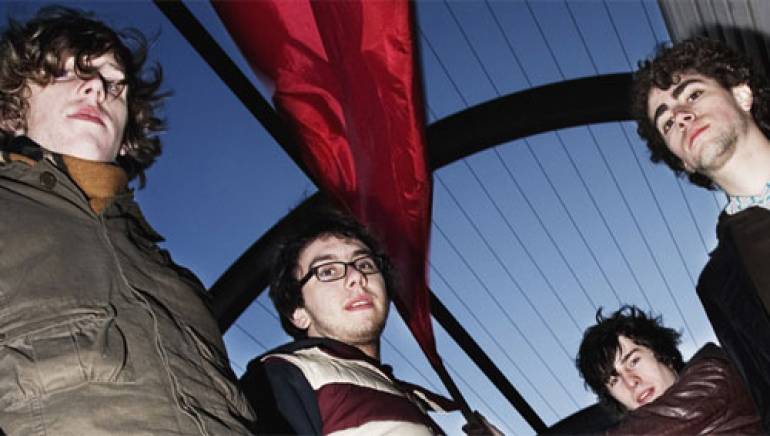 Discordant noise and sublime melodies — who can resist? The Tokyo Police club demo wound up in the hands of Paper Bag Records after a sweaty Pop Montreal show. They played it once, twice, three times and then lost count. They then eventually just made time in their schedules to kick back and enjoy “The Nature of the Experiment,” the band’s party tune, on a daily.

At the start of high school, David Monks (vocals, bass), Josh Hook (guitar), Graham Wright (keyboards) and Greg Alsop (drums) started learning to play together from scratch. Their first band fizzled; the new order came about when the boys realized how much they missed playing music. “Cheer It On” had already been written, and “Tokyo Police Club,” featured as a lyric, according to Monks, “justified as the band name in its own ridiculousness.”

The band picks apart the average chord, creating something quite amazing — the guitars are disjointed, high yet perfectly pitched, erratic, verging on sci-fi. They’re cushioned with bumbling, pillow-fight bass lines, crashing open hi-hat, and good-humored keyboards. This is the sound of Tokyo Police Club.

The band has the usual list of idols, musicians that play with their hearts on their sleeves. But secretly, they divulge, with a smile that’s ironic, “We think Jimmy Page and John Paul Jones are the real deal.”

Monks describes the band as “wide-eyed post-punk with a tendency to get over excited — so much so that someone has to come and tell it to settle down.” Hook’s blistering guitar would be enough to induce goose bumps alone; the effect of the band as a whole should come with some sort of warning.

The tracks were written – the sound was already being nurtured – after just three days of recording in the studio. “A Lesson In Crime” was slapped on the ass, wrapped in a blanket and sent out the world. The reception has been nothing short of spectacular, with coverage in Rolling Stone, Entertainment Weekly, Blender, Pitchfork, MTV2’s “Subterranean” and MTVU. A spring tour with Cold War Kids, SXSW and Coachella brought even more acclaim, including The New York Times and a performance on The Late Show with David Letterman. Summer headlining dates included performances at the Sasquatch! Music Festival and Lollapalloza. Tokyo Police Club will release their new single, “Your English Is Good”, available digitally and in limited 7” vinyl. The 7” b-side will be “Waiting in the Wings”, written by keyboardist Graham Wright, and the digital release will feature a new acoustic b-side, “Swedes in Stockholm.”