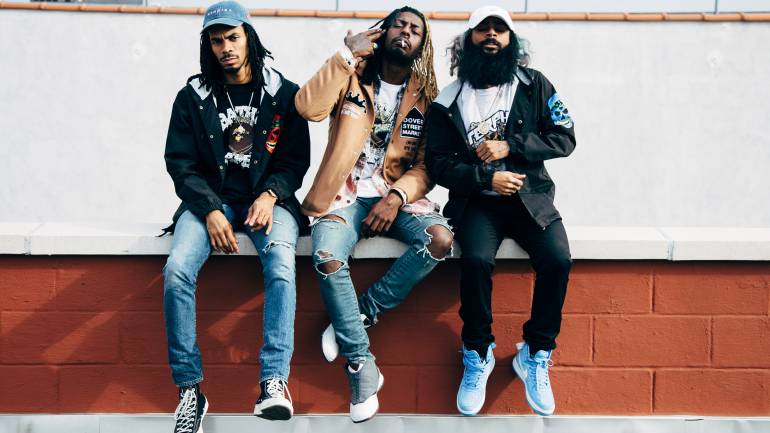 True to the culturally diverse mix of their home turf of Brooklyn, incendiary hip-hop trio Flatbush ZOMBiES are willfully difficult to categorize. Weaned on a steady diet of skewed pop culture, cult cinema and boundary-pushing hip-hop, the trio formed in 2010 and immediately set about injecting a surreal, hallucinogenic sensibility into the ever-evolving rap underground.

BMI caught up with the trio to try to make sense of it all.

Your whole sound and aesthetic seems much more broadly informed than by solely hip-hop. Elements of other aspects of popular culture – from video games to wrestling to skate culture and especially cinema (notably your affinity for Kubrick’s A Clockwork Orange and your recent grindhouse-homage) play a major role. Was this a conscious decision from the beginning?

Meechy Darko: Hell, yes! I think it’s important for artists to show their inspirations from other forms of art, and not just music. It’s kind of boring for musicians to always talk about musicians. It’s cool to hear a director say music inspired a film, because all the arts need each other.

Zombie Juice: I guess so. We are inspired by a lot of different cultures. We’re big fans of W.W.E. and video games. I remember tripping out seeing A Clockwork Orange for the first time, being stimulated by classical music and visually stimulated by scenes. I felt every emotion as it ran off each actor’s face.

Erick “The Architect” Elliott: I don’t think anything I do is conscious besides my existence. When you are inspired by something, you have no choice but to become it. We’ve always liked these things (as far back as children), so, naturally, these are the things that are going to inspire our music. I’m sure that probably had everything to do with us making the decision to make music together! Did that make sense? Hahaha!

What are you aiming to do differently from mainstream rappers, and where do you see hip-hop, as a genre, headed?

E: What is mainstream music anymore? The music that’s on the radio (to me) isn’t what the people want to hear. I think we are aiming for something bigger than “songs for the radio.” If anything, mainstream music needs to be more accepting of topics that aren’t just the lifestyle of the artists on the radio. Hip-hop has to continue to grow in order for it to be as important as it is around the world. If we don’t push the culture, it can go out like disco did!

J: Be more conscious of the impact you can have on people’s lives. Do more to help others in need. I see hip-hop being an everlasting musical genre. It already is duplicated and it’s the most culturally binding genre as well.

You’re obviously named after your home neighborhood. How much has being born and raised in Brooklyn affected the sound and identity of the Flatbush ZOMBiES?

E: Flatbush is a neighborhood of many likenesses, of many kinds of people. Caribbean music was a large part of my childhood, and had a lot to do with the kind of music I wanted to make. I was always into making beats. I wanted to work with artists like Buju Banton way before I even knew how to play a keyboard. Hip-hop and reggae flourished a lot in the `90s when I was growing up. It wasn’t foreign to see an artist like DMX working Sean Paul or Super Cat, and Heavy D throwing it down. I’m also half-Jamaican, so I’d always be around music like this, and I lived in Flatbush the majority of my life. How can I not be a product of Brooklyn?

J: It is everything. Most of my stories that I write about come from my Flatbush or New York memories being from here. I feel honored to help carry the hip-hop legacy.

M: Being born in Brooklyn is everything. This neighborhood helped mold us. I don’t think people really realize how hood we are, because of what we choose to discuss in our music. But, you know, Crooklyn. No place like this!

Beyond geography, is there a single, common thread that unites the “Beast Coast” movement?

E: Everyone in Beast Coast is part of a brotherhood; we could be all over the globe and still be a family.