Posted in MusicWorld on February 11, 2011 by Craig Shelburne 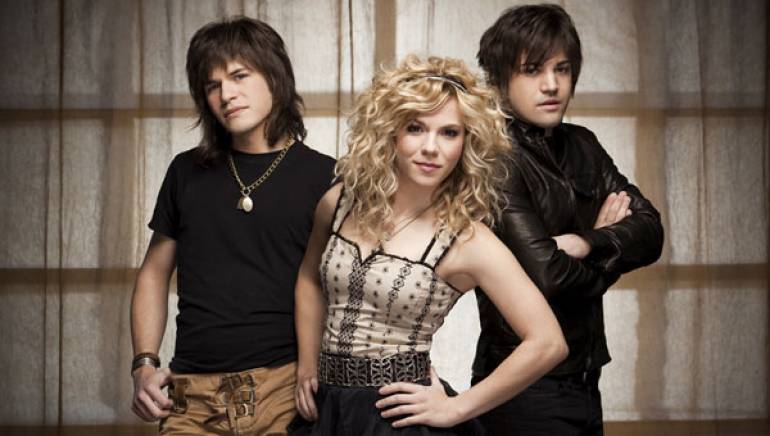 Five years ago, the Band Perry played their first show in the underwear section of a Walmart as part of a concert series co-sponsored by the retailer. The performance was brief – pardon the pun – but they’ve since parlayed their family dynamic into a budding career in country music. As their second single, “If I Die Young,” climbed the chart, they landed a Country Music Association (CMA) nomination for vocal group, a spot on Alan Jackson’s fall tour and an invitation to perform at the Grand Ole Opry’s 85th anniversary celebration.

Then, “If I Die Young” made a run for immortality. After topping the chart, the song earned a 2010 Grammy nomination for Country Song of the Year. This spring, the trio will crisscross the country as part of Tim McGraw’s Emotional Traffic Tour.

Fronted by Kimberly Perry and backed by younger brothers Neil Perry on mandolin and Reid Perry on bass, the band finds that rehearsals at their home in Greeneville, Tenn., often lead to impromptu songwriting sessions. Kimberly, a husky-voiced singer who plays acoustic guitar, says they always naturally write arrangements, melody and lyrics at the same time. “It’s almost like we’re building all three of those elements into each other as we’re creating the song. For us, it’s the easiest way to do it,” she says, “and also the most inspiring.”

“If I Die Young” offers a meditative look at a promise unfulfilled, and Kimberly refers to the lilting melody as “a little bit of a lullaby.” As for the song’s title, she adds, “That literally fell out onto the paper. Once I began to see that in my journaling, I ran downstairs because the boys were rehearsing. We all jumped into our writing circle and I said, ‘Just play these chords over and over until I say stop!’”

The band members agree that because “If I Die Young” was written with major chords, the element of hope shines through the heavy lyrics.

“People were going to make it a soundtrack for wherever they were in life. A lot of people have lost a loved one recently and it’s their anthem and it’s giving voice to their grief,” Kimberly says. “For others, it’s more like the spirit that we wrote it out of – it’s comforting and contented.”