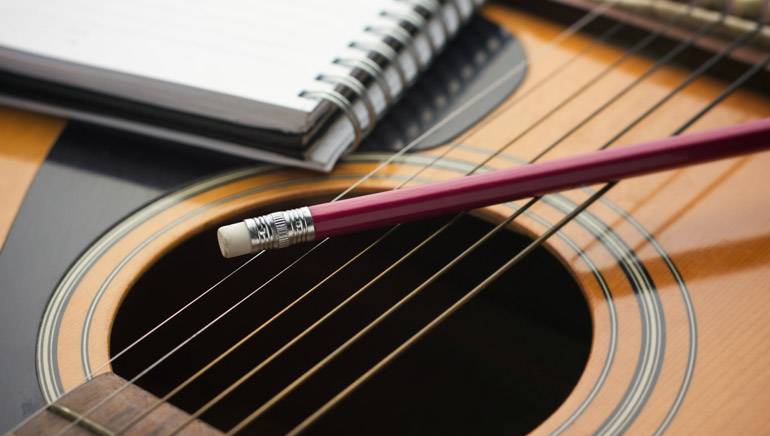 It’s been said that great songs are rarely written—they are rewritten. Sometimes magic happens and we get a “gift”—a first draft of a song that truly needs no polishing. But more often, successful songwriters have to dig to find those gems.

What is the chance that every word and every note you compose are such utter perfection that not even one line of lyric, one note, or one chord could possibly be improved? But how can you know what needs to be rewritten?

If someone points out what they perceive are weak links in your work—and their feedback resonates—then you know what to target. But what if you are trying to figure it out on your own?

Rewriting Lyrics
A common pitfall for developing songwriters is that there is often a discrepancy between what the writer intended to express and what the audience receives. Unless your goal is to write the kind of non-literal, abstract lyrics that work so well for artists such as Coldplay, Beck, and Rosanne Cash, who write their own material, you want to be certain your listener understands your message.

We know what our lyric means to us, so it can be difficult to determine whether we have expressed ourselves clearly enough for a listener to receive the message we intended to send—and to feel the emotion we hoped to evoke. The solution is to solicit feedback.

At my first songwriting class the teacher asked me to explain my second verse. As I began to clarify its meaning, he stopped me and asked me to write my explanation on my notepad. I was surprised, but reached for a pen. He then told me I’d need to write that explanation at least a million more times so it could be attached to every copy sold in the event that I earned a platinum record.

Play your song for friends, cowriters, and if possible, music industry professionals, and ask whether your story was clear to them. It’s certainly not pleasant to learn our listeners had no idea what our lyric means. But only by getting listeners’ reactions can we learn whether our lyric is accomplishing what we hoped. It’s better to make adjustments than to have a song that fails to connect with your audience.

Now that you know you have successfully conveyed the story and emotions you intended, it’s time to be sure you have incorporated lines of lyric that go beyond predictable and mundane to exceptional. Print your lyric sheet and circle those lines that you know are special—lyrics that are fresh ways of expressing your idea. Don’t circle “good” lines that simply suffice—you’re looking for “great” lines that are original enough to grab attention and compel an artist, producer, music publisher, record label executive, or an audience to choose your song instead of anyone else’s.

Now for the painful part. Cross out those lines that are mediocre; predictable; cliché—the lines anyone could have come up with. Those won’t separate your song from the pack. Work each of those lines like a puzzle, asking yourself how you can express this same idea in a new way.

Sometimes, this kind of tweaking occurs during an initial writing session. Other times, you might identify the lines that are “placeholders”—lines that you will revisit and continue to work on later.

If you don’t feel you’re capable of being objective or tough enough on your own work, enlist a co-writer or another songwriter to tell you which lines of your lyric and which aspects of your melody they feel are the strongest—and which ones might benefit from additional attention. You can also seek out critiques or feedback from trusted industry professionals, such as those at BMI’s free monthly Nashville Songwriters’ Workshops. (For workshop registration information visit: http://jasonblume.com/bmi-workshops.html.)

Kevin Lane, Creative Director at BMG Music Nashville, stated he expects that before his writers bring him a song, they have taken the time to ensure that every aspect of the song is as good as it can be.  This process entails revisions being made during and sometimes after the writing session. In many instances, after an initial writing session, his writers continue to work on the song at home and/or sometimes additional writing sessions are needed so all cowriters can be present to make tweaks and revisions. He stressed that he respects his writers’ creative processes, but if he feels a song can be improved, he will suggest revisiting it to see if new lines or changes to the melody might serve the best interests of the song. His writers are typically amenable to that.

Rewriting Melodies
We’re writing songs—not poems—and a strong, memorable melody is critically important to the success of any song. Regardless of how well written a lyric might be it needs a catchy, easy-to-remember melody in order to enter listeners’ hearts. Yet some writers struggle to get their lyrics just right, while settling for the first melody that pops into their heads.

The number one pitfall I observe when critiquing songs at the BMI Nashville Songwriters’ Workshops and the events where I teach throughout the world is melodies that sound as if they are following the predictable chord changes. They work with the chords—there is no dissonance or “rub”—but they lack the distinctive intervals and rhythms that can make a melody unique and truly memorable. They’re “good”—but “good” isn’t good enough in a business that’s as competitive as songwriting.

Starting with chord changes or an existing musical track isn’t wrong; there is no right or wrong way to write a song. In fact, hits in various genres are regularly created by “topliners” providing the melodies and words that go “on top” of a musical track that is created first. The key is to craft vocal melodies that not only work with the chords and/or the musical track, but are fresh, compelling melodies that grab the attention of decision-makers, and sear into listeners’ brains.

Try writing at least five completely different melodies for each section of your songs—verse, chorus, and if applicable, pre-chorus, and bridge. Explore various rhythms—breaking up the line in different places, and placing emphases on different notes.

For example, if your title is “I’m Gonna be a Star,” you could emphasize the words in boldface by holding them out longer, or assigning them higher notes:

Explore various note choices—trying ascending or descending notes. You can also test different rhythms within the vocal melody—including some long, legato notes, and incorporating choppier rhythms. You might also see how your melody works at different tempos, and in different time signatures.

Another thing you can do to create new melodies is to repeat some of your syllables, words, or combinations of words. For example:

You might also try using nonsense syllables to create an added melodic hook. For example:

You can also try a variety of different chords to accompany your melodies. Sometimes, a new way of harmonizing your melody can be just the ticket it needs to bring it to life.

Record your various melodies so you don’t forget them. Most often the strongest melody is that one you can’t get out of your head at midnight, long after you’ve finished working on the song—even if you did not initially think that was the most memorable choice. If you’re uncertain about which one is the best, seek professional feedback.

Richard Harris (whose songwriting credits include # 1 Billboard single “Lie To Me” featuring Koko LaRoo with Cole Plante) said, “I have trusted people, like management and co-writers that I always run songs by. I trust my gut instinct, too. If it doesn’t feel right I will always go back in and look to see what can be improved. Both melody and lyrics are open to being looked at. Sometimes it’s a matter of adding something completely new, like a ‘post hook’ idea to really lift the song. If after some time living with the song I still have that feeling that something’s not working, I will go back in and rewrite. It’s usually pretty obvious what’s not working.

There are times when my publisher has asked me to rewrite.  I will always give it a go, even if I think they may be wrong. It never hurts to try and see what happens. I think it’s important to work with your publisher and trust their opinions.”

Dan Hodges of Dan Hodges Music suggested, “I’ve heard some writers say that when they’ve heard their song on the radio—and it’s a big hit—they think they could’ve done better; that they wish they’d gone back and made that second verse, or another part, even stronger. Always be willing to rewrite and try to make your own songs better.”

If you knew your career was riding on making each melodic and lyric phrase as strong as possible would you attempt to strengthen them? How many times would you rewrite them? Your success might indeed be contingent on coming up with that “wow” line or melodic phrase that makes an artist—or an audience—say “YES!”

You don’t need ten or fifty or one hundred more “good” songs—you need one incredibly strong song that will blow the competition out of the water. We can’t know what our “best” is until we explore multiple possibilities. Don’t hamper the initial rush of creativity or censor your instincts when the song starts coming through you. But after that original burst, challenge yourself to rework every line of lyric until it is fresh, original, and exceptional, and every melodic phrase until it is both unique and memorable. Remember … if you don’t prefer your revision you can always return to your original version.

Jason Blume is the author of This Business of Songwriting and 6 Steps to Songwriting Success (Billboard Books). His songs are on three Grammy-nominated albums and have sold more than 50,000,000 copies. One of only a few writers to ever have singles on the pop, country, and R&B charts, all at the same time—his songs have been recorded by artists including Britney Spears, the Backstreet Boys, the Gipsy Kings, Jesse McCartney, and country stars including Collin Raye (6 cuts), the Oak Ridge Boys, Steve Azar, and John Berry (“Change My Mind,” a top 5 single that earned a BMI “Million-Aire” Award for garnering more than one million airplays). Jason’s song “Can’t Take Back the Bullet” is on Hey Violet’s new EP that debuted in the top-10 in twenty-two countries and reached #1 throughout Scandinavia and Asia. He’s had three top-10 singles in the past two years and a “Gold” record in Europe by Dutch star, BYentl, including a #1 on the Dutch R&B iTunes chart.

Jason’s songs have been included in films and TV shows including “Scrubs,” “Friday Night Lights,” “Assassination Games,” Disney’s “Kim Possible” “Dangerous Minds,” “Kickin’ it Old Skool,” “The Guiding Light,” “The Miss America Pageant,” and many more.  Jason is in his nineteenth year of teaching the BMI Nashville Songwriters workshops. A regular contributor to BMI’s Music World magazine, he presented a master class at the Liverpool Institute for Performing Arts (founded by Sir Paul McCartney) and teaches songwriting throughout the U.S., Australia, New Zealand, Norway, Ireland, the U.K., Canada, Bermuda, and Jamaica.