Posted in News on November 28, 2016 by Ellen Mallernee Barnes 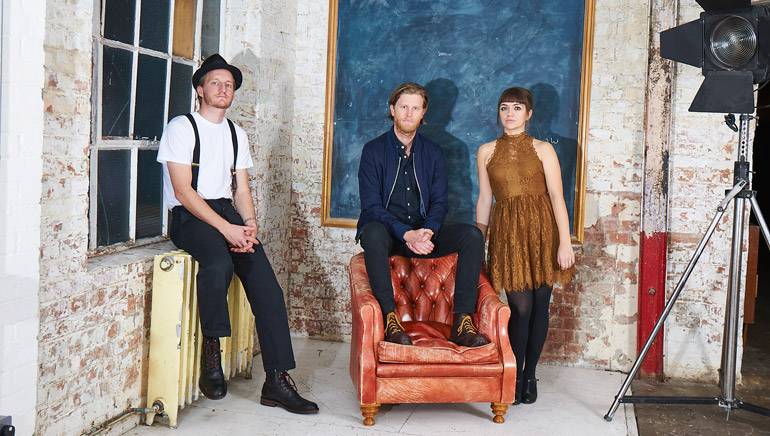 For the last 11 years, Wesley Schultz (“Wes”) and Jeremiah Fraites (“Jer”) have written songs together. For the past six, they’ve been joined by cellist and backing vocalist Neyla Pekarek, whom they met through a Craigslist ad in Denver after moving there from Brooklyn. Originally from Ramsey, New Jersey, Wes and Jer were barely out of their teens when they started playing music together, as a source of comfort after Jer’s brother and Wes’ good friend, Josh, died of a drug overdose. But the early iterations of their band were less serious—one of their cover bands was called Free Beer—and not yet an expression of self. By the time they’d released The Lumineers in 2012 and became known around the world for their simple, perfect No. 1 hit “Ho Hey,” that had all changed. Most recently, in an effort to retreat from the fame and pressure that has followed them since their first album, the GRAMMY nominees spent a full six months in a rented house in Colorado writing their second album, Cleopatra. Though they say four or five years ago nobody would have been asking them for songwriting advice, it turns out they’ve learned a thing or two over the past decade about how to write a great song.

“The writing between me and Wes has evolved in that we discriminate against more ideas,” says Jer. “When we first started writing together and anybody had a song idea we would finish it to the end and put it on our MySpace; now, there’s a more sophisticated and evolved filtering process. I have a good sense, and I think Wes does too, about what we show to each other, about what could be on LP three, or what could feel like some sort of movie soundtrack-esque thing.”

Beginning with Lumineers, their self-titled debut album, and the EPs that fed into it, the band has scheduled its songwriting sessions religiously, developing a clock-in and clock-out approach. “We’d look at a week—at the side jobs we had that week—and we’d work out when we were going to spend time working on music together. We’d treat it like it’s a job. For the most recent record, we took a 9-to-5 kind of approach, working six months together and almost every day,” says Wes.

Because of this discipline, they were able to enter the Cleopatra recording sessions with all their songs already written and demoed and recorded preliminarily. Well, almost all of their songs. “Going into the studio we didn’t have ‘Angela’ written,” says Wes. “It was written in the studio, which was unique to that song. It’s the only song on the record that had an element of danger in it—an element of: This has not yet lived with us for months and months. We don’t actually know how we’re going to feel about it. That’s somehow in that song. The producer, Simone [Felice] and I were going on two-hour, three-hour motorcycle rides, and a lot of the lyrics were written on a bike, just riding through the Catskills. I really loved that song because when the album was finished, and we heard the song on there, it was so hard to imagine the album being nearly as good without it. If we knew that going into the studio we would have panicked and freaked out and not written it. It happened in this beautiful, organic way, and it really defines the record for us.”

Songwriting isn’t always so effortless, but because of the band’s commitment to return to its craft again and again, Jer says he’s even learned to ride out periods of writer’s block peacefully: “I had an interesting thing happen to me the other day. We were on tour, and I had gone to the studio to try to inspire myself because I felt like I was having what I categorize as writer’s block. I started talking to the engineer, and he was like, ‘Writer’s block—what’s that? Isn’t that the same as having conversation block?’ I didn’t understand it then, but the next day I took it to mean that when you’re listening to someone and you’re engaging in conversation, sometimes the best thing you can do is be silent or say ‘OK’ or ‘I agree’ or ‘Wow, that’s really interesting.’ You don’t always have to come up with some complicated rebuttal. You don’t have to tell the other person how that relates to your life. And I think with songwriting, if it’s your appetite, it’s always going to come back to you. Or if it’s a conversation, it’s always going to resurface sooner or later. With songwriting, the worst thing you can do is tell yourself, I want to be creative today or vice versa, I don’t want to be creative today. Both are limiting in their own way. What I’ve found is that just being gentle with yourself at times, like when you’re writing and you don’t feel like it’s coming through, that’s OK. The important thing is to keep going back to the well.”

And sometimes multiple scrapped songwriting sessions do end up leading to a beloved song. Explains Wes, “For ‘Gale Song’ [on Cleopatra], the verse, the bridge and the chorus all came at different moments and were extracted from other songs, pushed out of this song’s body and pulled into this other one like a Frankenstein. We ended up really loving it, so we recorded it when we were making our record, and it fit really nicely.”

When asked if the great success of “Ho Hey” taught them any lessons about how to write a hit song, Wes and Jer demur. “If you listen to ‘Ho Hey’ specifically, it would never strike me as a hit song or a song that goes for the jugular of pop music,” says Wes. “It sounds a little more slipshod and kind of bare. I don’t think drums even enter until the second verse. The bass doesn’t enter until after the first chorus. The closest we come to having a songwriting recipe is that Jer and I have a belief in the songs, and then we like to basically dirty them up. That makes them feel more real to us, more human and believable.”

In fact, it was the band’s attendance at the BMI Pop awards in 2014 (where they won the Song of the Year award for “Ho Hey”) that demonstrated to them just how many different paths there can be to a great song. “Sometimes there would be three songwriters on the stage to accept an award; sometimes the stage would be overflowing with maybe 15 writers for a single song,” says Wes. “That just proves that there’s no one way to write a hit song.”

In summing it up he adds, “If you want to play music, you should know it’s a war of attrition. You just need to outlast the other side, which is just the side that’s giving up. You need to figure out a way to stay connected and committed to music, but eventually if you have the stuff, you’ll break through in a way that will make you feel validated. It will happen; it just might not happen in the way you planned it. I watched this inspiring documentary a while ago called Before the Music Dies; it’s something that every musician should watch. And in it, Dave Matthews had a really brilliant thing to say: ‘If you love music, wrap your life around music, and go be a barista or go be a bartender and just play the open mics and play gigs and play music. You can do that. No one’s stopping you. And right there, you’re a musician.’ I think having your expectations solely on the craft of it is going to get people a lot farther than thinking, How do I do make money off of it? Money will come if you’re making something that people want to hear and it gets exposure. But that’s a lot out of your control, so just worry about your craft.”