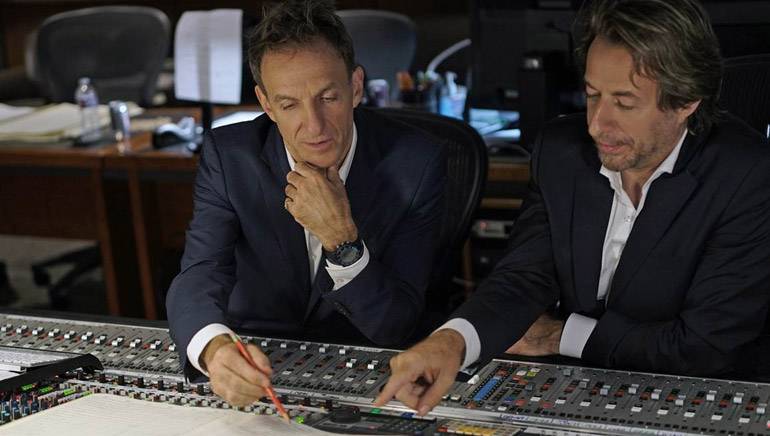 While many siblings can’t even agree on what music to listen to, Mychael and Jeff Danna choose to write it together. And this year the brothers have turned their attention to penning the score to the Golden Globe-nominated film The Breadwinner, which is not as easy a story to capture as other animated films for children might be. It is the story of a girl who cuts her hair and disguises herself as a boy, so she can earn money for her family after her father is imprisoned in Afghanistan under the Taliban.

Nora Twomey, who directed the groundbreaking film, chose the Dannas for their ability to hone right in, which they did despite the difficulty of telling such an important story in a way that kids, as well as the rest of us, would understand. Cementing the fact that music is the universal language, brothers Mychael, whose resume includes the award-winning Life of Pi, and Jeff, whose work with Mychael can also be heard on the Netflix series Alias Grace, speak the art of scoring fluently, and The Breadwinner is no exception. BMI is honored that they took the time to talk with us about their careers, separately and together. Here’s what they had to say:

How did Nora Twomey select you both to score The Breadwinner?

MD: I believe she was familiar with our extensive work with different musical cultures, and she knew that, like her visual style, she wanted to integrate Afghan folk elements within western style storytelling. She was also aware of our animation scoring for Pixar, WAG and others, so she felt we had the right qualifications to take on the important and difficult work of composing a score for an animated film about a serious non- western subject.

What was the process in working with her and what did she ask you to do?

JD: We met with Nora in Toronto - midway between Ireland and California! - And spotted the film. She was very open to what our ideas would be, but she was firm in her belief that the music should honor the Afghan musical culture as much as possible. This was absolutely the right concept, but it turned out to be quite a tricky task. Compared to the other cultures that we have enjoyed collaborating with, the Afghan musical culture has been heavily repressed and damaged by the Taliban’s regime and the result was that the musicians and artists are scattered around the world…and not always even aware of each other’s existence. We had an interesting six weeks there where we had almost no luck recruiting Afghan players and wondering what we were going to do! The other concept of Nora’s was that the score should embody a kind of ‘slow-release’ idea of the themes and melodies. Nora didn’t want anything to feel ‘complete’ in the early reels of the film. “Our story and our characters are still developing and the music should represent this.” It was an unusual and insightful approach, and after writing the themes in full for our own purposes, we laid things out in a parsed-out and fragmented way for the first third of the film.

Why did the subject of this film speak to you?

MD: We love the way that this film makes the world a smaller place, a place where we have more things in common than differences. It’s such a personalized story of a family with the same small recognizable details to us here -  sisters fighting, families sitting down for meals - that it makes the specific challenges and struggles of being a young girl in Afghanistan much more relatable than what we would see on the news. What could be more important than building a sense of empathy between young people here and young people there?

This is a special film - an animated story for young people about such a serious subject. How did you approach it musically?

JD: The film travels down two paths, as it were. The somber and oppressive Real World, and the magical and fantastical Story World, which takes form in the film as a story that Parwana tells her younger brother. For the Real World sections, we utilized a stripped down palette - smaller orchestra , fewer soloists and simpler arrangements. For the vibrant Story World sections we opened the up the size of the ensembles using brighter musical colours, plentiful Afghan elements and scoring the scenes in a more active ‘animated‘ style.

These two musical paths shared themes presented in these different fashions. In the last reel of the film, these two paths merge and a musical peak is reached.

Were there challenges in working with Afghan music and musicians? How did you prepare?

MD: One of the wonderful things about scoring animation is the long time that you get to work on a film where the structure is locked many months before you record the music. This gave us weeks of study time to really get familiar with the musical culture of Afghanistan, which is quite complicated - given all the different tribes and people’s that have influenced the culture through the ages. Because the Taliban banned music during the 10 or so years that they were in full control of the country, there was a real break in the musical tradition and so it was quite difficult to find players. We had originally planned to travel to Kabul to record there, but the situation deteriorated quite badly last year and so we had to work with musicians remotely. We were able to make contact with some players through the Afghan National Institute of music which was incredibly helpful - in particular a young girls choir. These girls are about the same age as the protagonist in the film, so it was very moving to hear their voices used in the telling of a story that after all, springs from their land. The courage of the teachers and the students was very inspiring. It’s a land where things that we take for granted like music, education, and the education of girls, these things are in jeopardy every day here. In fact, the founder of the school was a victim himself of a suicide bomb a few years ago because he angered fundamentalists by teaching music to girls and it left him partially deaf. Working with students and musicians with that level of courage is truly inspiring and something we wanted to make sure the score would live up to.

MD: This year Jeff and I also together wrote the music for a very different project for Netflix called Alias Grace, a six-part mini-series based on a wonderful Margaret Atwood novel set in the 1840’s. It was a score that we recorded here in Los Angeles with a small group of fantastic orchestral players in period style. It’s one of the joys of what we do that we can go from Afghan musicians and a medium size orchestra to a chamber style, classically flavored musical world.