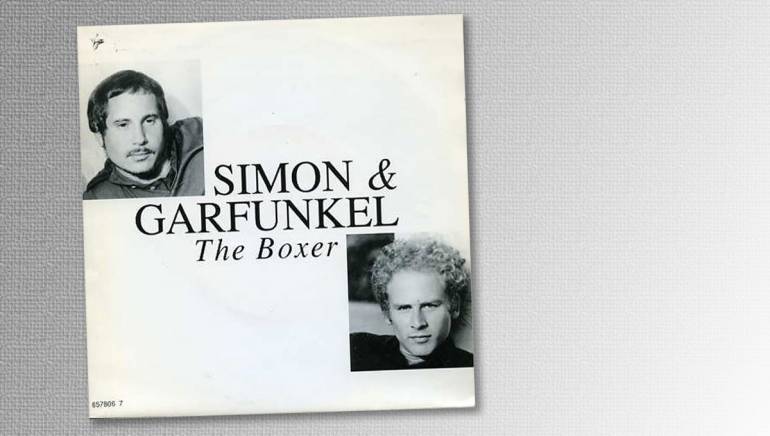 The explorations in sound that would feature prominently on Simon & Garfunkel’s fifth studio album, 1970’s Bridge Over Troubled Water, were evident right from the start with the making of “The Boxer,” which began on November 16, 1968 inside Columbia’s Music Row Studios in Nashville. Having envisioned a guitar-laden rhythm track, Paul Simon was fortunate to secure the services of session ace Fred Carter, Jr., by then a familiar face on the Nashville country and pop scene. While taping numerous acoustic and electric guitar and Dobro overdubs, Carter was struck by the unorthodox recording style that had become the hallmark of S&G’s handpicked soundman, Columbia producer/engineer Roy Halee.

“Paul and I sat down to cut the basic track,” recalls Carter, “and suddenly I’m surrounded by seven or eight different microphones — in front, behind . . . he even miked my breathing!”

It was Carter who provided the song with its signature cascading acoustic-guitar introduction, concocted on the spot. “I was playing one of those Martin 000-18s, tuned up a third and cross-chorded to an open G,” reveals Carter. “That baby guitar’s got such a short neck, it was easy to bring the strings up to the right tension. I came up with this thing and played it to Paul. And he said, ‘I love it . . . but I think it needs to be played on a concertina.’ So there was some dude from Italy doing his first tour of the United States, who just happened to Italy’s greatest classical concertina player. So Paul brings him in with an interpreter, and we sat there all day and went over the lick, and they wrote it out for the guy, who then played it. And afterwards Paul says, ‘Naw, that’s not it.’ And he dismissed the guy and he walks out in bewilderment, and we went right back to where we were and got it in about the third take.”

The spirit of technical creativity continued weeks later back in New York City. In an effort to fulfill his love of big natural reverb, producer Halee rang up session drummer Hal Blaine, who eventually found himself standing alongside a large empty elevator shaft inside Columbia’s East 52nd Street studio building on an otherwise quiet Sunday afternoon.

“There we were with all these mic cables, my drums, and a set of headphones,” says Blaine. “When the chorus came around — the ‘lie-la-lie’ bit — Roy had me come down on my snare drum as hard as I could. In that hallway, right next to this open elevator shaft, it sounded like a cannon shot! Which was just the kind of sound we were after.”

The song’s distinctive instrumental break was also conceived under unusual circumstances. During the Nashville recordings, session man Curly Chalker had been summoned to cut the part on pedal-steel guitar. While recording their lead vocal tracks in a Columbia University chapel a month later, however, Simon and Garfunkel came up with the idea of using a wind instrument as an alternate solo, and the call went out for a piccolo trumpeter. Rather than choose one part over the other, Halee, back in his East 52nd Street control room, experimented by making a single dub of the two diverse instruments, carefully blending Tennessee country with New York classical —and the now-famous passage was complete.

All of these flights of fancy would ultimately test the limits of Columbia’s late-’60s recording capability, Halee later recalled. “Columbia only had eight-track machines in those days, and I obviously needed a lot of tracks! So I devised a way of syncing up two eight-track machines in order to get 16. It was tough, though — you had to hit both record buttons exactly right, or it wouldn’t work. Plus I would do a lot of what we’d call ‘wild tracking’; that is, flying an overdub into the mix, sometimes at random.” A brief Dobro lick (played by Carter) at the 2:46 mark is one example; Halee employed the same method for the string section that appears during the song’s finale. It was no easy task; once the tape machines began to heat up, the speed of the motors would change, making it exceedingly difficult for Halee to get everything to gel. “Consequently the strings kept going out of sync with the vocals, so I had to mix eight bars, then stop, mix another eight bars, stop again, and so on. As a result, there were a lot of edits during that section. If you could see what went on in an engineering capacity, you would not believe it!”

When Garfunkel accepted an offer to appear in the Mike Nichols film Catch-22, work on Bridge Over Troubled Water effectively ground to a halt for the better part of a year. But after reconvening at Studio B in the late fall of 1969, Halee, Simon and Garfunkel took little more than three weeks to complete the bulk of the album. By the time Bridge was finished on January 26, so was the career of Simon & Garfunkel, for all intents and purposes. Nevertheless, Bridge would go on to become the duo’s greatest success, scoring a sea of Grammys and topping album surveys worldwide (in the UK it charted for more than 300 weeks total, 41 of them at number one).