Posted in MusicWorld on March 24, 2006 by Kevin Zimmerman 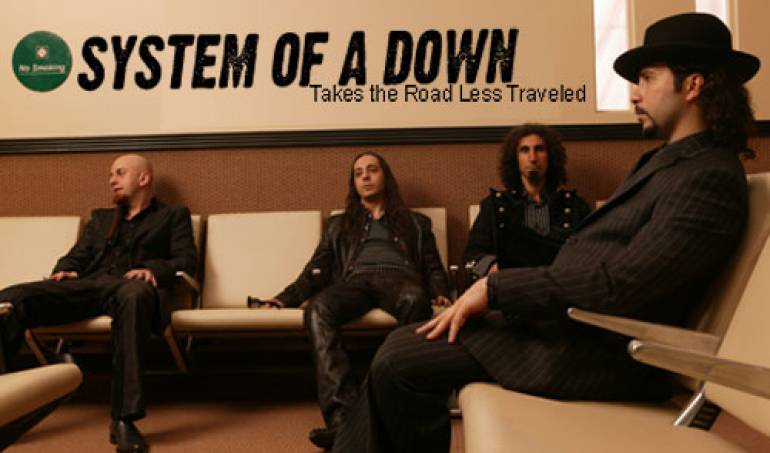 Tailor-made for short attention spans, Mezmerize, the new album by operatic thrashers System of a Down, clocks in at just over 36 minutes. Fret not, however: The second part of the ambitious song cycle, Hypnotize , is due to drop in November.

Two separate releases (for two separate prices) may conjure up reminders of Use Your Illusions of years past, but SOAD has something more relevant in mind. Propulsively political, snidely sarcastic, and fall-down funny—often all at the same time—the four-man group delivers a typically twisted manifesto that wonders (on lead track “B.Y.O.B.”) why governments usually send their poor to war, parodies macho attitudes on “Cigaro” and ponders the fact that “Tony Danza cuts in line” on “Old School Hollywood.”

That the results—patented on its breakthrough 2001 album Toxicity—often sound like “Jesus Christ Superstar” filtered through Primus, Pink Floyd, and Gilbert & Sullivan make SOAD all the more unique, if not revolutionary. “We’re artists for the sake of art,” says singer Serj Tankian. “And our expression is pure and natural in terms of where it comes from. I think that’s more real.”

Guitarist/singer Daron Malakian believes the group’s unpredictability is what appeals to fans. “Some bands are afraid of their fans: ‘They’re not gonna like this and they’re not gonna like that.’ We don’t have that mindset. We’ve gotta impress ourselves before we impress the fans—you gotta love yourself first, you know?”

“Every album captures where you are at that moment,” adds drummer John Dolmayan, who makes up the group’s gutbucket rhythm section with bassist Shavo Odadjian. “But almost instantly you’re in a new place as soon as it’s recorded, so it’s just basically a window into where you’re going in the future. And how people want to look at that and understand it is really up to each individual.”

For his part, Malakian believes that the prolific songwriting that went into the project, as well as the increase in vocal interaction between himself and chief songwriting collaborator Tankian, are signs of “just being honest as a writer—not being afraid to express different parts of my life and different parts of what I see around me. Some people kind of censor themselves; I don’t and this band doesn’t.”

When all is said and done, SOAD emerges on Mezmerize as blazers of a trail most listeners weren’t even aware existed.

And, keep in mind, this is just the first part of what’s shaping up as an epic work.