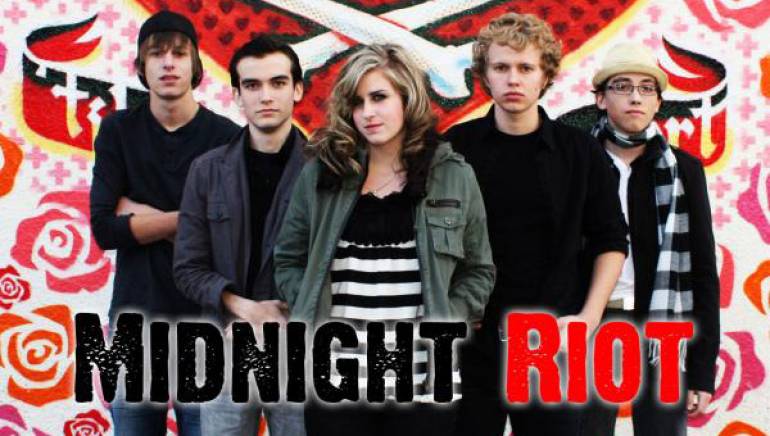 As most creative people throughout history could tell, earning a living through art is one of the hardest things anyone could ever do. But if recent events are any indication, then Midnight Riot is a lot closer to pulling off that ages-old dream. The band recently took top prize in “My Band Rocks Fox,” a battle-of-the-bands contest sponsored by the Fox TV affiliate in the band’s Austin, TX hometown. This isn’t the first time the band has outgunned the competition—in 2010, Midnight Riot won the Austin Music City Voter’s Poll. Now, Midnight Riot is slated to perform at a BMI showcase at the 2011 South by Southwest (SXSW) music festival in Austin, March 15-20.

Since they all hail from Austin, the members of Midnight Riot—including guitarists Samuel and Austin Canary, vocalist Amanda Kirkpatrick, bassist Dylan Samuel and drummer Zak Kirkpatrick—won’t have to drive far for the gig. But even though Austin is their home turf, Midnight Riot is still painfully aware of the tremendous honor of performing at SXSW.

“It’s a dream come true,” Kyle Samuel said. “With it being literally 15 minutes away, that’s remarkable for us. There are bands from Spain that fly in to Austin for a 15-minute show, so we realize how privileged we are to be literally right there.”

“The great thing about us going to SXSW is that our music will be heard,” drummer Zak Kirkpatrick added. “We just want everyone to have a chance to hear what we play, because this is what we love to do. Just being a part of the whole thing is an honor, because we know that a lot of bands try really hard to get into SXSW.”

Performing one of the world’s most prestigious music festivals would be a tremendous achievement for any band, let alone one like Midnight Riot whose member’s ages average 18 (three of the band’s members still attend high school). Midnight Riot formed in 2009 and proceeded to garner attention with guitar-driven original songs that recall influences like Green Day, Rage Against the Machine and Radiohead. The band’s self-titled EP is available on iTunes.

The EP offers an embryonic peak into a band that’s evolving quickly. Midnight Riot recently won a professional recording session courtesy of the Recording Academy Texas Chapter. Producer CJ Eriksson will oversee the sessions at Perdenales Studios. For Midnight Riot, the sessions are just another step towards that goal of becoming professional musicians. As Kyle Samuel said, “Just to be able to sustain ourselves and play music for a living would be a dream come true.”