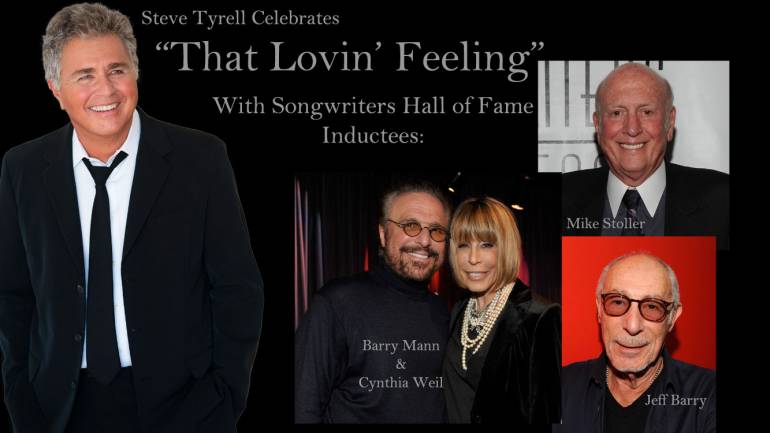 The BMI Foundation, in conjunction with the Songwriters Hall of Fame (SHOF), is proud to present an intimate evening with BMI affiliates Steve Tyrell and SHOF inductees Jeff Barry (“Chapel Of Love”), Barry Mann & Cynthia Weil (“You’ve Lost That Lovin’ Feeling”) and Mike Stoller (“Stand By Me”) at the GRAMMY Museum’s Clive Davis Theater in Los Angeles on Wednesday, March 4, 2015, at 7:30pm.

That Lovin’ Feeling, released on Concord Records, is Steve Tyrell’s eleventh album. This time around Tyrell is celebrating what he calls “the next chapter of the Great American Songbook.” The initial concept of the album emerged from Mike Stoller’s 80th-birthday concert in New York last year and holds special meaning not only because of the enduring legacy of these great songs and songwriters but also because they are Steve’s cherished longtime friends. Bringing deep-rooted friendships together with Steve’s performance will make for a very personal and spectacular evening of great storytelling and music history in the making.

Tyrell has enjoyed a multifaceted five-decade career as a solo artist and as a featured performer with symphony orchestras all across America. His version of “The Way You Look Tonight” in the 1991 film Father Of The Bride paved his way for an extraordinary career as a GRAMMY award-winning vocalist/producer. Tyrell has produced such renowned artists as Rod Stewart, B.J. Thomas, Diana Ross, Linda Ronstadt, Aaron Neville, Bonnie Raitt, Dolly Parton and Stevie Wonder, among so many others. Tyrell has also worked as a music supervisor for films by Steven Spielberg, Steven Soderbergh, Nancy Meyers and Charles Shyer. As a songwriter, Tyrell penned the #1 pop hit, “How Do You Talk To An Angel.” Most of his solo albums have gone top five on the Billboard Jazz Albums Chart, but he calls That Lovin’ Feeling, “the most fun album I have recorded to date…and it’s the closest to the real me.”

Doors open at 7:00 p.m. Admission is $25. Tickets can be purchased at the GRAMMY Museum box office beginning Tuesday, February 10. All proceeds benefit The Songwriters Hall of Fame and the GRAMMY Museum’s educational programs. For more information, please call 213-765-6800 or visit grammymuseum.org.