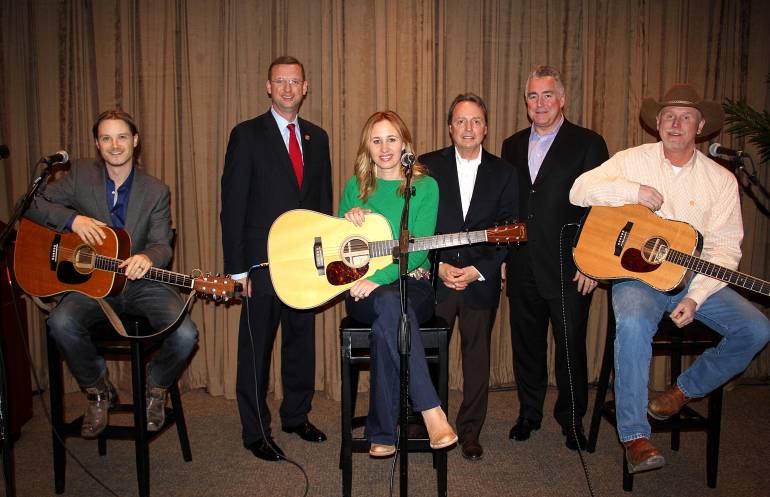 The Songwriter Equity Act, which is the result of a collaborative effort between BMI, ASCAP, SESAC, the National Music Publishers’ Association (NMPA) and the National Academy of Recording Arts & Sciences (NARAS), is garnering support in Congress. Since the introduction of the bill three weeks ago in Washington, D.C., its sponsor, Rep. Doug Collins (R-Georgia), has been joined by co-sponsors Rep. Marsha Blackburn (R-TN), Rep. Jim Gerlach (R-PA) and Rep. Hakeem Jeffries (D-NY). The bill would allow a rate court to consider other royalty rates as evidence when establishing digital performance rates for songwriters and composers. It would also adopt a fair rate standard for mechanical reproduction.

Commenting on the importance of the bill, Rep. Collins said, “Fostering the development of intellectual property has been an important part of the Constitution for more than 200 years. Now, we have to make sure we’re doing it on 21st-century terms. Songwriters, in one way or another, touch the lives of every American. Today, there are more than 45,000 songwriters in Georgia that deserve honest pay for their honest, original work. For their sake and for the generations of these talented innovators to come, we have to update our laws to encourage creativity and ensure fairness in the marketplace.”

Rep. Jeffries added, “The Songwriter Equity Act endeavors to modernize the music licensing system by updating provisions in the Copyright Act of 1976 to ensure songwriters are fairly compensated for their creative work. In New York, there are nearly 80,000 songwriters, composers and publishers who deserve to make a good living. As the caretaker of intellectual property law, it is important for Congress to make statutory adjustments when necessary to promote creativity in America. That is what this bill seeks to accomplish.”

Other supporters of the new legislation include the Copyright Society of the South, which in conjunction with the Association of Independent Music Publishers hosted a public event yesterday at the First Amendment Center in Nashville that featured Rep. Collins. Appropriately kicking off the event was a songwriters in the round performance by Josh Kear, Jessi Alexander and BMI award-winning songwriter Wynn Varble, followed by remarks from Rep. Collins, who said, “Songwriters connect us to our emotions in a way no one else can. They empower us.” A reception, sponsored by BMI, ASCAP and SESAC, capped off the gathering of songwriters, publishers and other industry guests.

The vital topic of modernizing the music licensing system has continued to gain momentum since discussions about copyright reform highlighted the CISAC World Creators Summit in Washington, D.C., on June 4, 2013. The Summit, which focused on intellectual property rights in the digital age, was attended by several BMI executives including Senior Vice President, Corporate Strategy, Communications & New Media, Richard Conlon, who participated in a panel discussion with other digital rights stakeholders regarding direct vs. collective licensing and what it means for small rights holders.

Recent rulings prohibit publishers from withdrawing only their digital rights from PROs to individually negotiate fair rates for the use of their music on the Internet. This has only strengthened alliances between music licensing organizations and rights holders to champion much-needed updates to copyright laws. Passage of the Songwriter Equity Act is a means to achieve those updates.

BMI will keep you apprised of additional sponsors of the Songwriter Equity Act, as we continue our advocacy efforts on Capitol Hill to protect the future of your music. Read more from Rep. Collins on the SEA here.

Visit our Advocacy page for more on BMI’s efforts to protect your music.