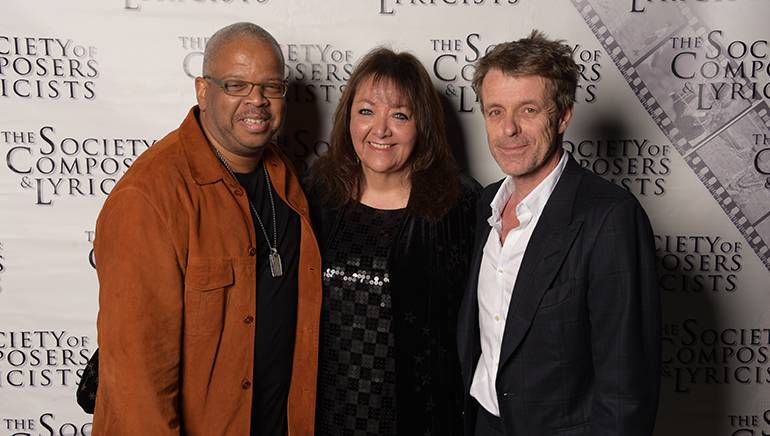 The Society of Composers & Lyricists honored notable composers Terence Blanchard and Harry Gregson-Williams with the organization’s prestigious Ambassador Award during two annual holiday parties given in NY on December 11, and in Los Angeles on December 19. In New York, five-time GRAMMY-winner Blanchard received the award with renowned director Spike Lee in attendance to help celebrate the accolade. In LA, newly-named BMI Icon Gregson-Williams received his designation with BMI’s Vice President of Film, TV and Visual Media Doreen Ringer-Ross present to congratulate him. Blanchard’s film scores include BlacKkKlansman, Malcom X, Black or White, Talk to Me, and When the Levees Broke, while Gregson-Williams’ many credits include The Meg, The Equilizer 2, Shrek, The Chronicles of Narnia: The Lion, and The Witch and The Wardrobe. Blanchard and Gregson-Williams now join other SCL-honored Ambassadors that include BMI composers Thomas Newman, Lalo Schifrin, James Newton Howard, Dave Grusin, the Sherman Brothers, Leiber and Stoller, and Mark Isham, among others. The Ambassador Award was established by SCL to recognize screen composers, lyricists and songwriters whose musical contributions have had a significant impact in films, television, and video games.

Congratulations to both composers on this latest honor!