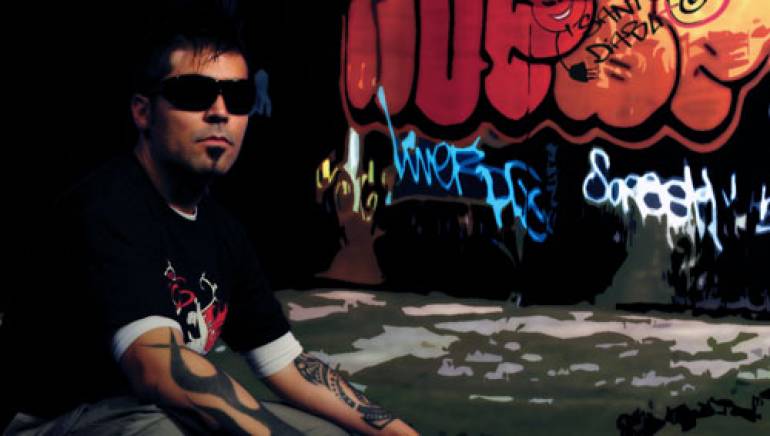 As a noted writer, Bruno Danzza has penned more than 100 songs for artists including Jenni Rivera, Banda el Recordo and Edith Marquez, as well as contributed music to a full slate of films and television shows. But as Santos Diablito, he unleashes his own provocative artistry. “Santos Diablito is my front man, the wild performer in me,” he acknowledges. “I mix hip-hop and regional Mexican music, and I’m a jumping singer finding my natural space in massive concerts. I enjoy these two ways of making music.” As Diablito, Danzza spins stories from real life, “creating the sounds from the streets, love stories, my family, friends and dreams. I try to make a connection between people’s hearts and mine.”

The tattooed protagonist also casts an irreverent, larger than life aura over a series of entertaining videos. “I think of myself as a reloaded ‘Pachuco,’ a street singer/dancer/low-rider who lives a life fighting to make his impossible dreams real.” With a kinetic rhythm track and blazing horns, the recent single “Volverás,” from the forthcoming full-length project, extends the invitation to the dance floor first revealed in Santos Diablito albums Mock & Roll and Chondo-K-Chondo.

Danzza, who counts KISS and The Ramones among his cross-cultural influences, references the Sixties Chicano movement in the U.S. as well. “I learned about Cesar Chavez and the legacy of human rights. His fight for Mexican workers inspired me since I was very young. I’m part of the ‘Big Barrio’ located on two sides of the border from Los Angeles to Padre Island, from Tijuana to Reynosa. It’s one big neighborhood, one big family, one big opportunity to grow up. Latinos are now the ‘biggest minority’ in the U.S. and Latin music is the rhythm of the world. This is one big victory– don’t you think?”